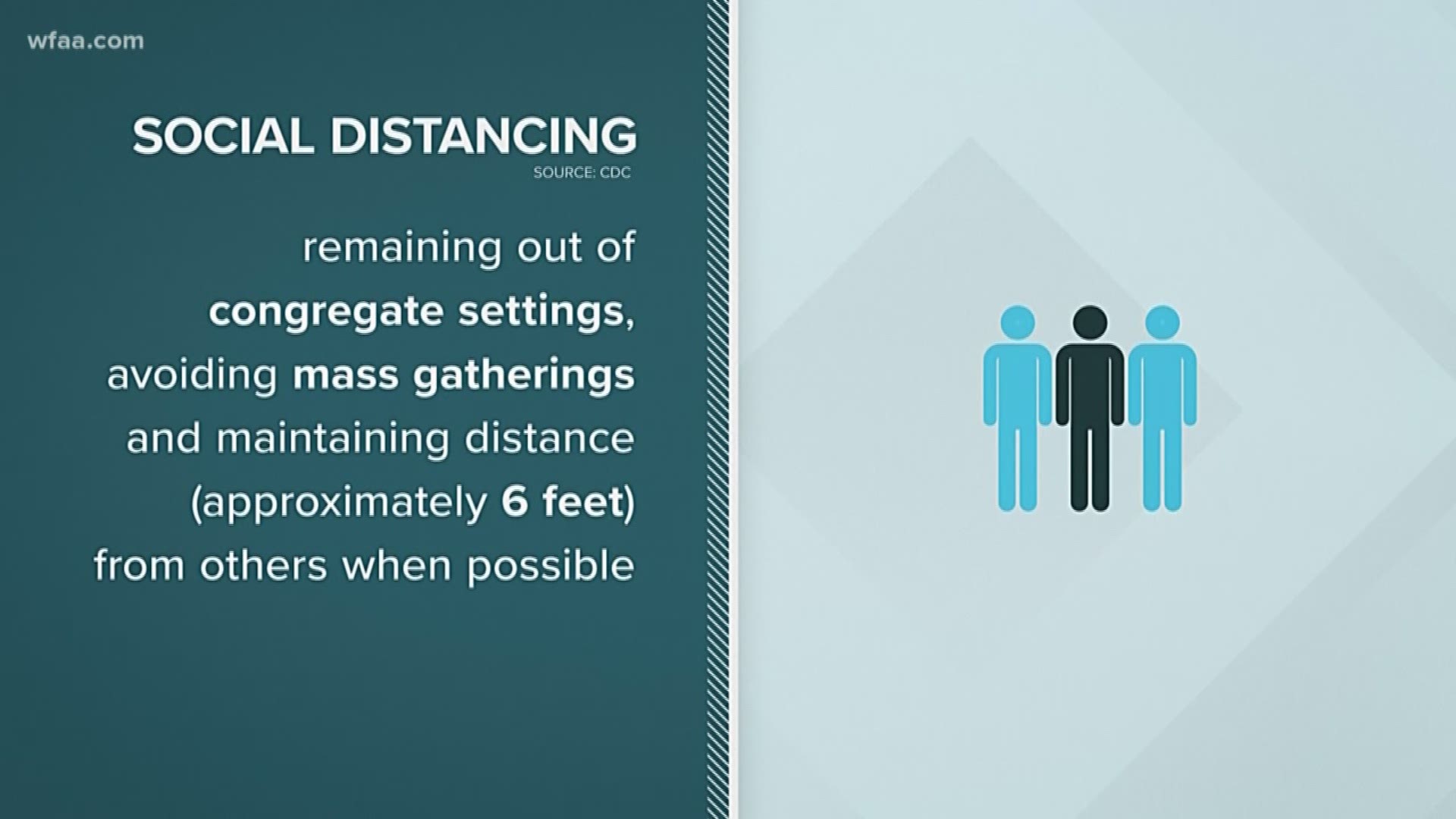 This story will be continuously updated as new closures and updated business hours are announced.

In efforts to prevent the spread of COVID-19 and to protect their communities, a number of North Texas businesses have announced closures or different business hours, or have been ordered by the government to close completely.

If you know of any updated business closings or different business hours, please email news8@wfaa.com.

Here a look at some of the latest closures:

The Austin-based movie theater chain announced Monday it would be closing all of its theaters until further notice. All shows have been canceled, and all tickets will be refunded.

The theater previously tried asking parties to leave a "buffer" seat in between parties as a way to practice social distancing.

Alamo has also suspended its Season Pass membership subscription service and will pause billing for that service for customers who have been affected.

The luggage startup is closing its stores for at least two weeks starting close of business March 16. It is also delaying the opening of a new store in Dallas.

All of the company's Red Rooms will be temporarily closed in the U.S. and Canada starting Monday, the company said Sunday.

BEYOND will be closed started Monday through the end of March. They will be filming workouts for members to stream starting Monday afternoon.

The entertainment spot will be closed on Wednesday, March 18 and Thursday, March 19, a spokesperson said.

Leaders with the venue said they will continue to monitor guidelines throughout the rest of the week and suggested patrons follow the venue on social media for any updates.

All classes have been canceled for the week starting on Monday, the company said in an email. They plan to offer live streaming events during the temporary closure.

Blue Mesa and Tacos and Tequila are closed for in-person dining but will be offering free delivery and will also offer pick-up and to-go orders.

Capital One will temporarily close certain branches and all Capital One Cafés, company officials said Monday.

"Our Capital One ATMs will remain open 24/7 and we are committed to ensuring customers continue to have access to critical banking services like teller and cash transactions."

Eight branches in Texas will temporarily close, but 61 others will remain open.

The restaurants in Frisco and Fort Worth will be closed through March 31, including delivery and carry out, a spokesperson for the company told WFAA.

The fast-food restaurant is temporarily closing its dining room seating until further notice. Some restaurants may only offer service through drive-thrus, while others may be able to offer takeout, delivery or mobile order options, according to a Sunday news release.

Chuck E. Cheese will remain open but will close its dining room and game room. Guests can call in and order pizza for pickup or order through GrubHub, Uber Eats and Door Dash. According to a news release, most locations throughout the Dallas-Fort Worth metroplex area are open from 11:30 a.m. to 8 p.m.

The Plano-based movie theater chain announced Tuesday, March 17 it will temporarily close all 345 of its theaters starting March 18. It is temporarily pausing all Movie Club memberships and is extending the expiration date of Cinemark Movie Rewards points to June 30, 2020.

See more about club memberships and other updates here.

All Columbia Sportswear brick and mortar retail stores will close on Monday and remain closed at least until Friday, March 27.

CorePower Yoga has closed all of its locations until March 30.

Cowboys Fit has closed all of its locations until further notice.

The arboretum announced it would close for business starting Tuesday to help prevent the spread of COVID-19 and be in compliance with the City of Dallas' restrictions on gatherings of 50 people or more. The closure will last until further notice.

The Dallas Museum of Art is closed but has exhibits you can view digitally at its website here.

The gym, spa and fitness franchise announced March 15 that it would close its Atlanta, Chicago, Dallas, Los Angeles and Miami locations beginning Tuesday, March 17 and plans to remain closed until the end of March.

In addition to the NorthPark stores listed above that are also at the Galleria Dallas, the following stores are closed until further notice:

On March 21, the Grapevine-based video game store announced it would shutter all of its physical stores starting on March 22 for the time being and move to online-only retail in an effort to combat COVID-19. Curbside pickup is still available and orders can still be delivered through the mail.

GameStop also said in the same news release that it will pay all U.S. employees whose hours have been eliminated an additional two weeks at their regular pay rate based on the average hours worked in the last 10 weeks. It will also reimburse all benefit-eligible U.S. employees for one month of the employee's portion of benefit expenses.

Gold's Gym is closing its corporate-owned gyms through March 31.

The Texas-based independent bookseller announced Wednesday, March 18 it would halt in-store browsing at all of its stores through March 31. Curbside pickup is still available by calling ahead to your local HPB, and folks can still order books from the store's website.

The Plano restaurant located at 1116 W. Parker Road will only be open for takeout and delivery through Grubhub. Its dining room will be closed, its owner told WFAA.

The gym will be closed through March 22 and then re-evaluate, it said on its Facebook page.

The Dallas independent bookstore has closed its doors to in-person shopping, but will allow curbside pickup and will still process online orders.

The Irving Mall announced March 23 it would be closed effective immediately until further notice. Updates will also be poted at its solical media pages on Instagram, Facebook and Twitter.

Kidzania Dallas has temporarily closed until further notice due to the COVID-19 pandemic. Those who pre-purchased tickets can use them on a future date up until Dec. 31, 2020.

All Levi's Outlet stores will be closed through March 27, the denim outfitter said Monday.

The athletic wear retailer is closing its stores in North America and Europe, from this Monday through March 27.

Macy's announced Wednesday, March 18 it would be temporarily closing all of its stores until March 31. This decision affects all Macy's, Bloomingdale's, Bluemercury, Macy's Backstage, Bloomingdale's The Outlet and Market by Macy's.

Mudleaf Coffee in Plano will still be open, but will also be offering curbside pick-up for coffee and touchless pay stations in the store.

"We will be offering curbside pick up and touch-less checkout. Just call 469-931-2233 to place your order and pay over the phone, then we will run it out to your car when you arrive," an email to customers said Sunday.

"Our cafe will still be open, and sanitized very frequently, for those of you looking to get out and/or needing a place to work from. We ask if you do not feel well to please refrain from coming in, and if you do feel fine please continue to wash your hands often and air five your friends and staff instead of touching."

Nike announced it would close stores starting on Sunday through Mach 27 in select countries battling the virus, including the U.S.

The following stores in the mall have closed:

To check other modified hours or additional closings at NorthPark, click here.

The sporting goods retailer closed all of its stores and operations.

Pei Wei will limit customers to take-out and delivery options from 11 a.m. to 7:30 p.m. and close its dine-in seating, it announced via Twitter on Monday.

All 162 R.E.I stores will be closed from March 16 until March 27, the outdoor store said on its website.

The studio will close starting Tuesday, March 17 until further notice, it announced on its Facebook page.

The coffee giant has stopped offering any seating at all of its stores nationwide and all of its services will be to-go only as of Sunday, March 15. Read more here.

On March 20, Studio Movie Grill announced it would be closing indefinitely and could be refunding all still outstanding tickets as the theater chain rides out the COVID-19 pandemic.

On March 16, the Dallas-based movie theater chain will stay open but limit its seating options.

"Studio Movie Grill is immediately further reducing seating capacity nationwide and offering Guest First Seating, 10 feet apart to a maximum of 50 seats in all its theaters," according to a  Monday, March 16 news release.

Summit will temporarily close all of its locations through the end of March, according to the company's website.

The yoga studio will be closed until further notice starting the afternoon of March 16, according to a post on its Facebook page.

On March 21, Ultimate Image MedSpa, with four locations in Plano, Dallas, Richardson and Lewisville, announced it would be temporarily closed until further notice, with a tentative reopening date of April 11.

The YMCA has closed all of its locations until at least March 31, officials announced on March 16.

WinStar will close its casino, retail stores and casino restaurants through the end of the March, the resort announced in a release.

The hotel will remain open as well as its cafe. The spa will operate, but with no more than 50 guests at a time.

Legends Bar and Grill will limit service to 50 guests at a time.