Alcohol to-go may be permanent, Gov. Abbott suggests in tweet

The Texas Alcoholic Beverage Commission announced alcohol-to-go sales will continue after May 1. 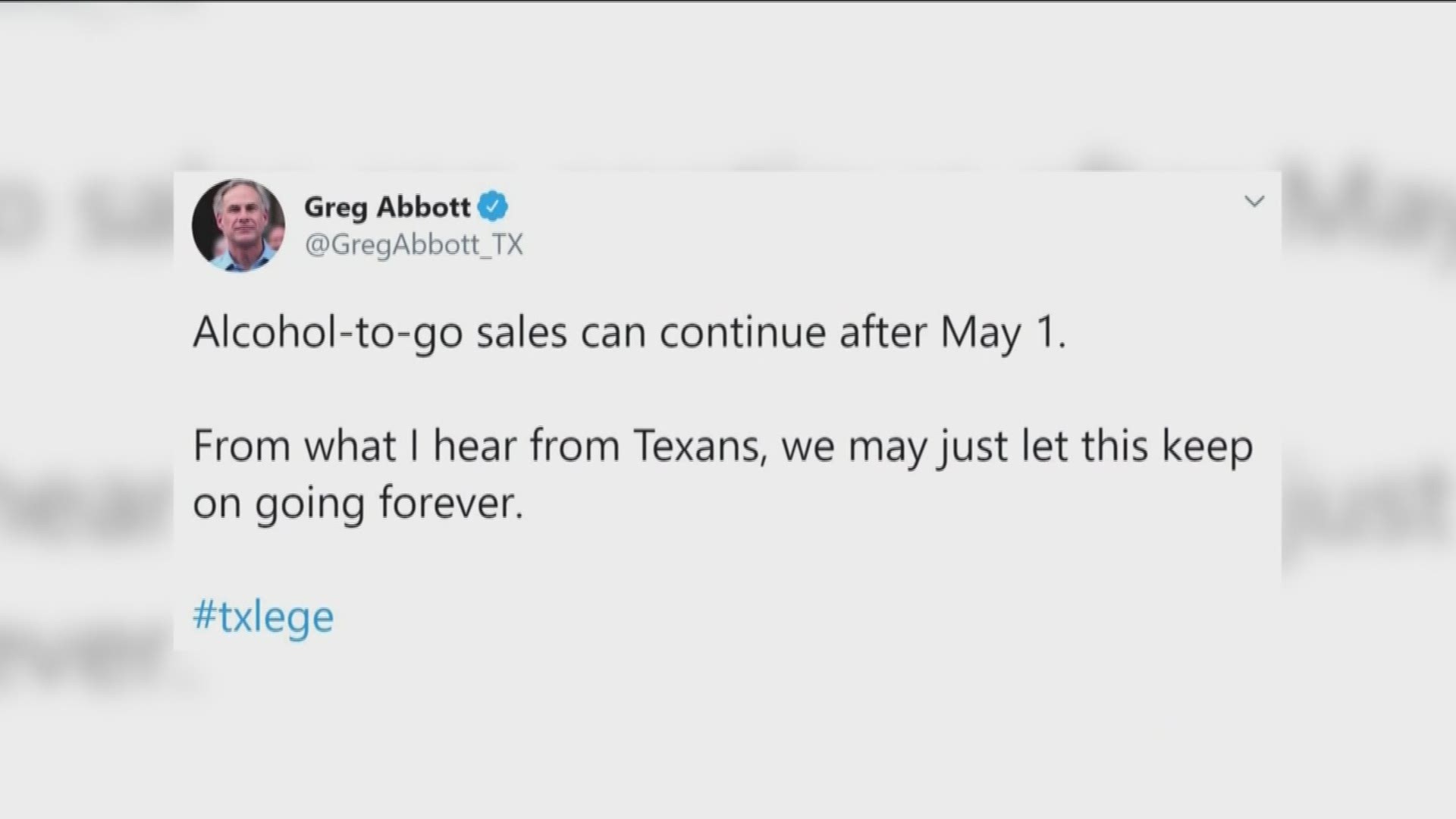 Abbott tweeted, "Alcohol-to-go sales can continue after May 1. From what I hear from Texans, we may just let this keep on going forever."

This comes after the Texas Alcoholic Beverage Commission (TABC) stated that restaurants opening May 1 can continue selling alcohol-to-go. The TABC also indicated these restaurants must have a 25% occupancy limit and follow all other standards for restaurants in the Governor's Report to Open Texas.

But there have been questions about what exactly alcohol-to-go means.

As of right now, the TABC has a set of guidelines for restaurants.

Those include that only alcoholic beverage businesses authorized by Texas law or a statutory suspension previously issued by Abbott can conduct pickup and delivery services. See who can and cannot do this.

Also, Mixed Beverage Permit holders are still not allowed to sell mixed drinks at their businesses for pickup or delivery.

"As before, people weren't allowed to basically mix a margarita on the premises and put it in a Styrofoam cup for the customer to take to go," said Chris Porter, a spokesperson for the TABC. "Restaurants can still sell alcohol for delivery or to-go alongside food orders in the original manufacturer-sealed containers in those same stipulations when it comes to distilled spirits being in those sealed containers, greater than 375 milliliters. That's still in place."

'The models have been proven ineffective and way wrong all along' | Gov. Abbott explains May 1 reopening date

Many restaurants have vocalized their concerns about the rules, saying that if they're unable to sell mixed drinks to-go, then they have to purchase new inventory instead of selling the product that they already have.

Porter said that if restrictions are loosened, it would be a decision made by the governor.

"TABC’s role is basically to enforce the State laws that have been put in place, as well as temporary waivers and measures that Gov. Abbott’s introduced during the coronavirus pandemic," Porter said.

As far as enforcement, Porter said TABC is focusing on educating business owners and, as of April 29, has not cited anyone.

"If we do receive a report of a business that isn’t in compliance, we will make contact with that business owner," Porter said. "Letting them know what their requirements are. And from there, most of them are getting back into compliance."

If restaurants decide to open on May 1, here's how things could look inside

In a press conference on Monday, April 27, the governor announced the stay-at-home executive order will expire on April 30 and will not be renewed at this time. Abbott also announced the opening of several types of businesses, including restaurants, that will be able to reopen on May 1.

Phase one of the re-opening of Texas businesses is scheduled to begin May 1, and Abbott said if the virus remains contained, phase two could begin by May 18.

'If you don't want to go out, don't go out' | Gov. Greg Abbott discusses his plan for reopening Texas in KVUE interview