'It was overwhelming: D-FW vaccine hunter Facebook group grows from 499 to 29K members, helping thousands get shots along the way

The group formed in late January as a way to streamline information about vaccine availability for seniors in North Texas. 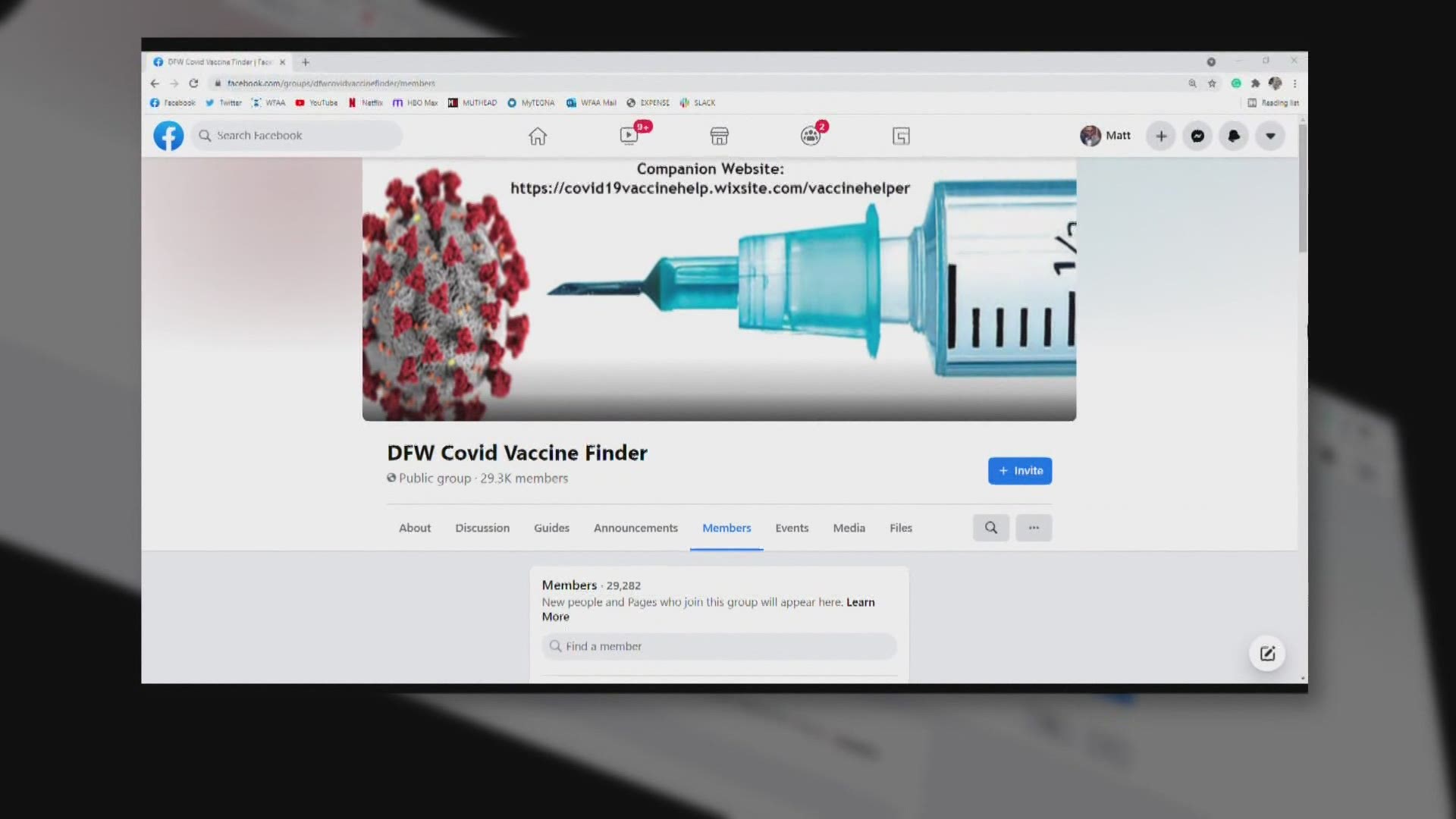 Resting on your laurels in the news industry is always a dangerous game.

It's never about the story you did. It's always about the next one.

On Jan. 22, I was struggling to find the "next" story. There's a point to this, I promise.

It was a Friday night shift, and I luckily came across a Facebook group that piqued my interest.

It was called DFW Covid Vaccine Finder. It had 499 members and was mostly made up of retired teachers or current Dallas Independent School District employees.

Back when vaccine rollout was slow, the group was brilliantly crowdsourcing information.

Members were calling pharmacies and local healthcare providers daily to see which sign-up lists were shortest or if a new batch of vials had landed.

RELATED: All adults in Texas are eligible for the COVID-19 vaccine starting Monday. Here's what to know

As page administrator Jon Battle told me, the idea was to help seniors navigate the online sign-up process.

"I'll be the first to say that the whole vaccine process has not been kind to seniors," Battle said in March. "They're not tech-savvy, and the way things are, you better know how to refresh your screen constantly and move around."

So on Jan. 22, WFAA let me interview some members belonging to the group to hear their experiences. One woman I talked to had got word from the group that shots were being offered in Tyler reasonably quickly.

She got her second shot the day we spoke. Another woman, a current Dallas ISD teacher, navigated all of the information on the page to see where she should sign up and talked to me about that.

The story aired and I wrote a web article and didn't overthink it during the weekend.

On Monday, I checked the group's page, and it didn't just have a few hundred members anymore; it had a few thousand.

'At one point, it was growing at about 800 members per day'

The traffic got so high that 10 administrators were put in charge of the group.

Day in and day out, posts would fly in. Most of them were just questions that might have already been answered hours before by Battle or another administrator about where or how to get a vaccine.

Post after post as you scrolled was met with dignity and respect. There was a "we're all in this together" vibe.

It was fascinating and eye-opening at the same time.

On one side, I marveled at how people were helping people. On the other, I was shocked so many people had no outlet where they could get streamlined vaccine answers and had to turn to Facebook to protect their own lives.

"All the members in the group started helping others on their own without being asked," Battle said. "They have jumped in and posted answers. It was very rare."

Battle is retired with a background in information technology. He oversees the page as a hobby.

But he sees it as more of a calling now.

"It's been a godsend for people. Folks have told us that without this page, they wouldn't have been able to figure this out.

"And I don't think we have too much competition online."

Most people didn't realize that vaccines weren't just going to significant county health departments or hospitals. Battle and others helped inform those wanting vaccines that you could proactively sign up on multiple vaccine lists instead of waiting on just one.

He also created a separate website with commonly asked questions and links for information.

That website also has a running crowdsourced spreadsheet for where "waste lists" are operating. A waste list is a daily sign-up for some pharmacies and healthcare providers to call people if they have extra doses that they may throw out that day.

The group has such a good reputation, that 29,000 members are now part of it.

"It feels good for me, for sure," Battle said. "I've got the time, the skills, and the motivation."

"We're not going away. We'll be here until every person who wants a vaccine gets one."

RELATED: Do you have to be a U.S. citizen to get the COVID-19 vaccine? What immigrants need to know

Battle is expecting more members to join now that any adult over 16 in Texas is eligible for vaccination. He welcomes them all if they need help.

We finished our conversation talking about how crazy the past two months have been, how a single news piece turned into a movement that was oftentimes more helpful than any tweet a local official could have made about where to get a vaccine.

That's what's so crazy about this story. The "next" story.

After it aired, I was already looking around for another scoop.

Turns out, it sparked a sequence of events that really helped people.

Sometimes, I forget how powerful information can be.