Seven-month-old Steele Swanson contracted COVID-19 this week. His parents thought he just had a cold at first. 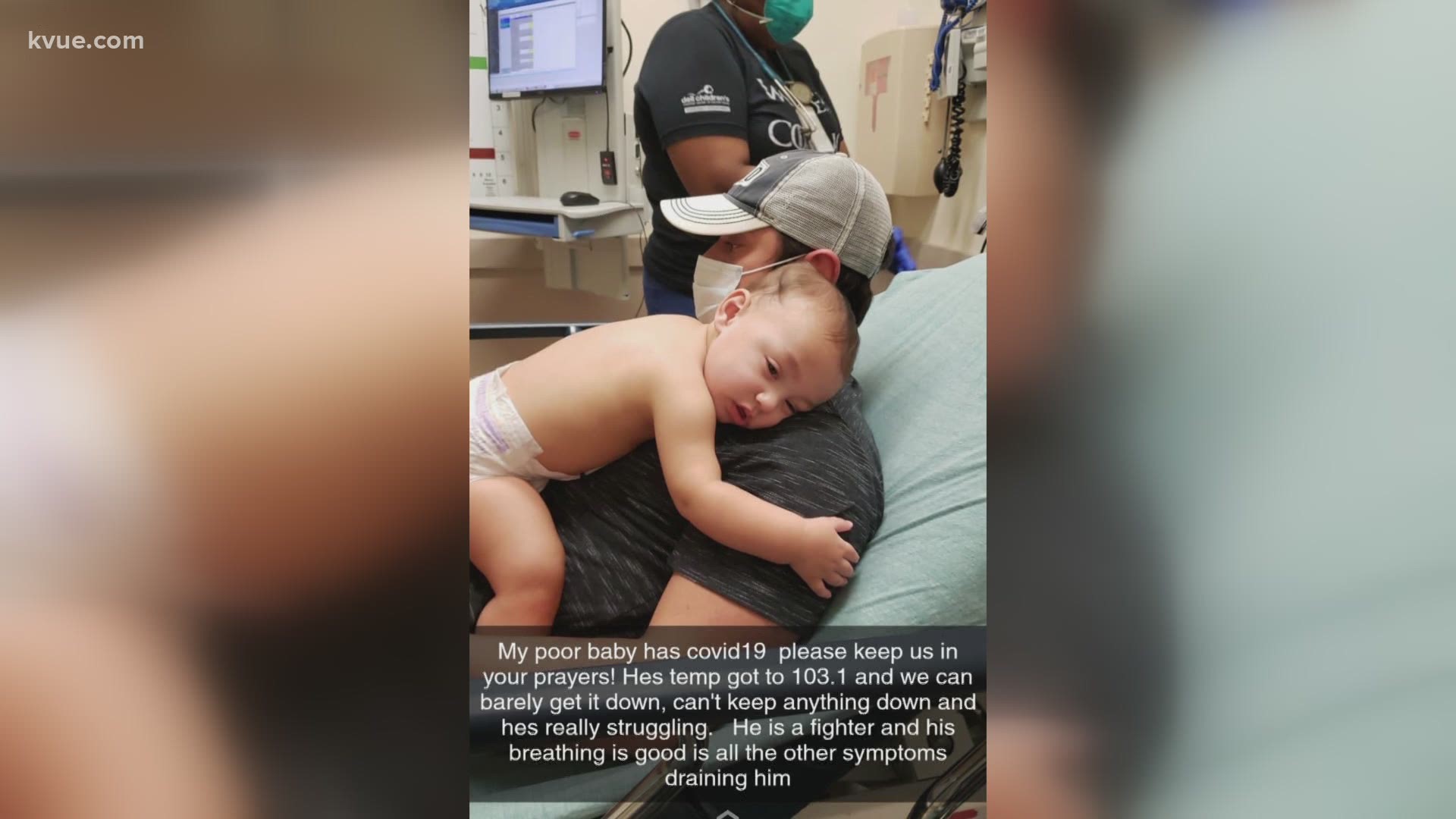 Steele started sleeping a lot more, eating a lot less and developed a fever of 103 degrees as he arrived at Dell Children's Medical Center, according to Baillie Swanson.

"At first, honestly, I thought he was maybe having a bit of a cold or going through a growth spurt – that's why he was sleeping a lot," she said. "When we got that call and [my mom] said that she was COVID positive, I was like, 'Maybe we need to be a little bit concerned.' We just kind of watched him over the next couple of days. When that fever kicked in and he stopped eating and he started sleeping all day, I was like, 'Yeah, this is not a cold.'"

According to Steele's parents, Baillie Swanson's mom called them after she had possibly exposed Steele last Thursday. By Sunday, Steele's health had deteriorated. By Tuesday, his fever shot up. On Wednesday, he was in the hospital.

Both parents did not immediately think their son was sick with the virus. Baillie Swanson questioned why doctors were not looking as seriously at other possible causes like the flu. According to Dr. Valerie Smith, a pediatrician in Tyler, symptoms for kids with COVID-19 could look a bit different than what we see in teens, adults and seniors.

"In addition to affecting the respiratory tract, COVID can absolutely affect the gastrointestinal tract," Dr. Smith said. "We do see symptoms of nausea, vomiting and diarrhea often in people with COVID. If a child is having vomiting, then providing those anti-nausea medications may allow them to eat and drink well."

Smith added if a child is sick and not eating at all, that's a red flag and parents should consult a physician. She also said for parents with kids who cannot verbalize their symptoms to look for more aggressive muscle movements around the chest area and labored breathing.

Baillie Swanson described Steele's vomiting as thicker than normal at the time. The Swansons have been giving Steele Motrin, Tylenol and anti-nausea medication to help Steele keep food in his stomach. They returned home from the hospital on Wednesday night as his health improved. As of Friday, the fever has mostly gone away, but they will still quarantine. Now, his parents say he has started to wheeze a bit while breathing.

"[Doctors] said it comes and goes," Brody Swanson said. "The way the symptoms come, it's kind of in a wave. That's kind of how it's been affecting us as well."

Coincidentally, Brody Swanson contracted the virus and self-quarantined back in March. He said he's started to feel some symptoms again but knows they can beat the virus.

On Thursday, he posted to a Facebook group, Lonestar Dads, asking for prayers for his son. In return, the dads in the group collected $400 worth of groceries, more than $200 in gift cards and more than $600 in cash to help the Swanson family. He has been out of a job because of the pandemic, so only Baillie Swanson has been providing an income.

"They went above and beyond, they still are, they haven't stopped," Baillie Swanson said.

"They continue to ask how Steele is," Brody Swanson said. "There are a lot of great men on that page who came through."

Months into this pandemic and now his son fighting the virus, he wants to encourage everyone to wear a mask. Initially, he wasn't sure how functional they would actually be, but now hopes people will take the precaution more seriously than he did months ago.

Despite the slightly labored breathing, the Swansons expect Steele to make a full recovery within the next few days or a week. If his condition worsens, they will return to the hospital.