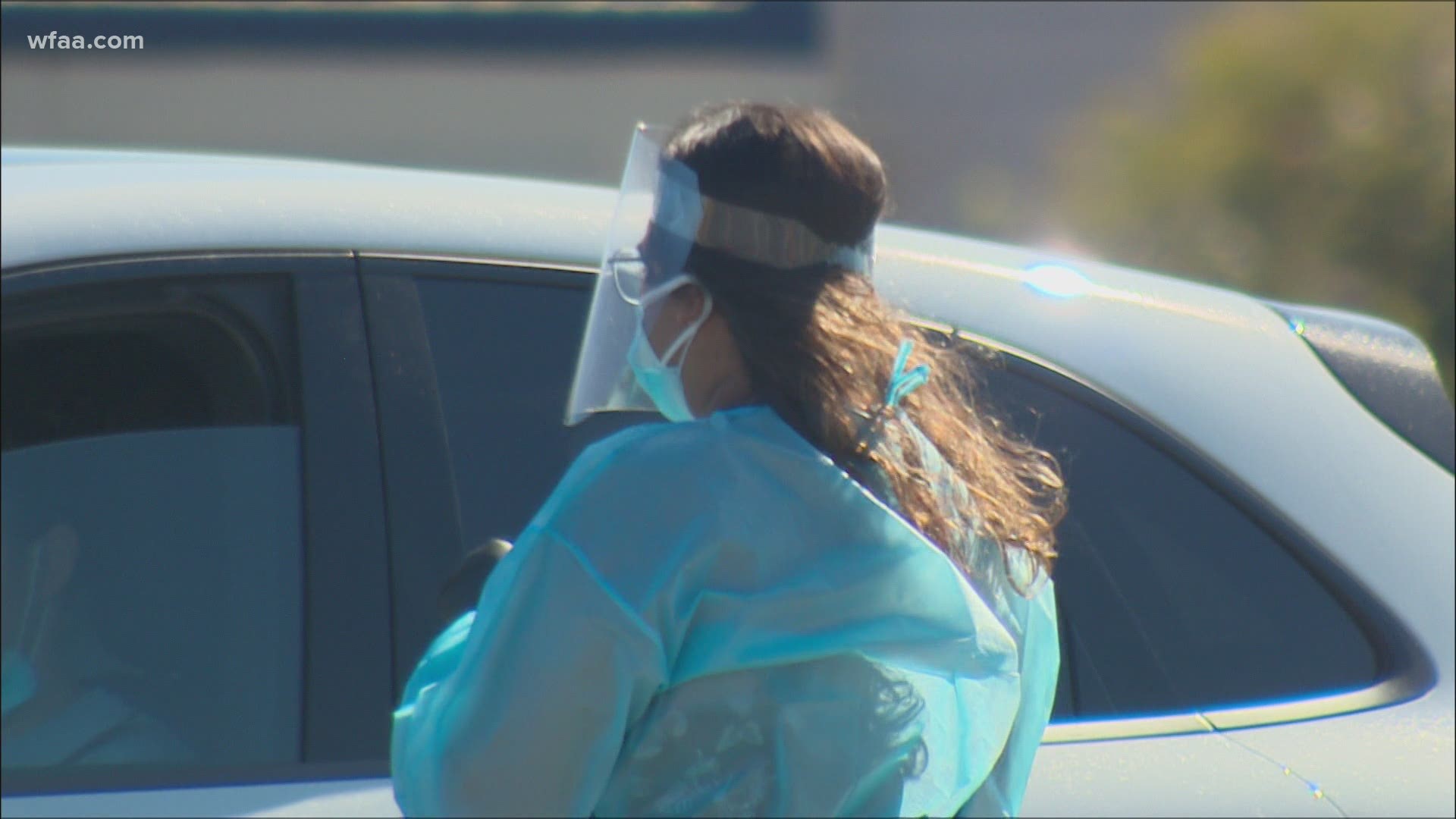 Updated at 7:49 p.m. with additional information.

The Texas Department of State Health Services reported 10,826 cases of COVID-19 across the state Tuesday evening, and 117 additional deaths.

At this time, there are currently an estimated 139,048 actives cases, officials said.

Dallas County officials said there have been problems with the state health department's electronic laboratory reporting system in the past.

"Today it appears the system is reporting artificially low numbers to several counties," Dallas County said in a news release.

The county said there is little reason to believe that "if the full numbers were reported" they would be different than the trend over the last several days.

The county also reported four additional deaths, a woman in her 60s, a man in his 60s and two women in their 70s. The man in his 60s did not have underlying high-risk health conditions. The three others did, officials said.

Dallas County also reported that of the people with symptoms going to hospitals, 15.3% are positive for COVID-19.

There are 18 ICU beds available in the county, according to the Denton County coronavirus dashboard. Sixty-eight ICU beds are occupied.

There will be free testing starting at 8 a.m. Friday, Nov. 20 at North Central Texas College parking garage. Community members must live in Denton County and can pre-register by calling 940-349-2585.

Eight more people in Tarrant County have died of COVID-19, bringing the confirmed death toll to 802 since tracking began in March.

The latest victims range from a Watauga man in his 50s to a Keller woman in her 90s. Health officials said all but one of the victims had underlying health conditions.

In addition to the eight deaths reported, the county announced 732 new cases. This is a slight decrease in daily cases after the county reported more than 1,000 cases several days last week.

Hospitalizations however continue to increase, according to the county dashboard. There are currently 778 patients in area hospitals because of coronavirus compared to 740 one day ago.

This morning, county health officials issued a public health warning due to hospitalizations surpassing the 15% mark.

The past 14 days, Grayson County is averaging 52.71 cases a day, a county record.

The most reported cases in one day happened on Nov. 11 with 195 cases.

Van Zandt County had 59 new COVID-19 cases on Tuesday, which is a new daily record.

The previous record happened on Aug. 12 with 38 cases.

The past 14 days, Van Zandt County is averaging 16.21 daily cases, a county record.

There were 41 new COVID-19 cases in Wise County on Tuesday.

The county's second-highest mark happened on Sept. 22 with 45 cases.

The Texas Department of Criminal Justice announced that one of its chaplains has died after battling COVID-19.

On Nov. 5, Gerald “Jerry” Bedison, 78, tested positive for coronavirus and was hospitalized. He died days later, in the early morning hours of Nov. 16, officials said.

Bedison worked with TDCJ for more than seven years and was assigned to the Neal Unit in Amarillo.

“Chaplain Bedison was highly respected among staff and inmates and has always been a huge asset to chaplancy,” said Rehabilitation Programs Division Director Christopher Carter.

There have been 23 Texas Department of Criminal Justice employees that have died due to COVID-19 complications since the beginning of the pandemic, officials said.

Texas A&M asks students to get tested before Thanksgiving

With Thanksgiving nearly a week away, one university in Texas is ramping up COVID-19 testing sites ahead of the holiday.

Texas A&M University Chancellor John Sharp said he has asked the Texas Division of Emergency Management to help the 11 campuses get testing vans and tents on all of the campuses before the holiday.

"Let’s do all we can to stop this pandemic and get back to life as we knew it. Thanks to everyone who chooses to take a test before heading home," Sharp said.

The Fort Worth Opera is the latest organization to announce that future in-person performances will not happen due to the ongoing pandemic.

In an email Tuesday, General Director Afton Battle announced the Opera has decided it will not perform in Bass Performance Hall this upcoming spring.

Battle said after they made the decision after receiving news that the Performing Arts Fort Worth will not be opening its doors to the public for the rest of the year. They also will not begin phased reopening of Bass Performance Hall until March.

Kerens ISD extends Thanksgiving break due to spike in cases

Kerens Independent School District announced Monday that it is extending Thanksgiving break for staff and students.

The district, which is near Corsicana, said on social media, the extended break is due to "continuing COVID issues."

The school break will now be from Nov. 17 through Nov. 20. District officials said the additional holiday days do not need to be made up.

The school district is about an hour away from the Dallas area.

Texas has surpassed 20,000 confirmed coronavirus deaths as COVID-19 continues to surge in the United States.

Researchers with Johns Hopkins University say the death count, reached Monday, is the second-highest in the country, behind New York. Texas has the 22nd highest death count per capita at 69.7 deaths per 100,000 people.

So far, state leaders have given no indication of forthcoming restrictions to keep people from gathering and spreading the virus.

Instead, Gov. Greg Abbott in recent days has been emphasizing that new therapeutics and vaccines are expected to become available soon.