Dr. Philip Huang said they expect to report more than 1,000 new cases in Dallas County on Friday, far surpassing the daily record of 708 set on Thursday. 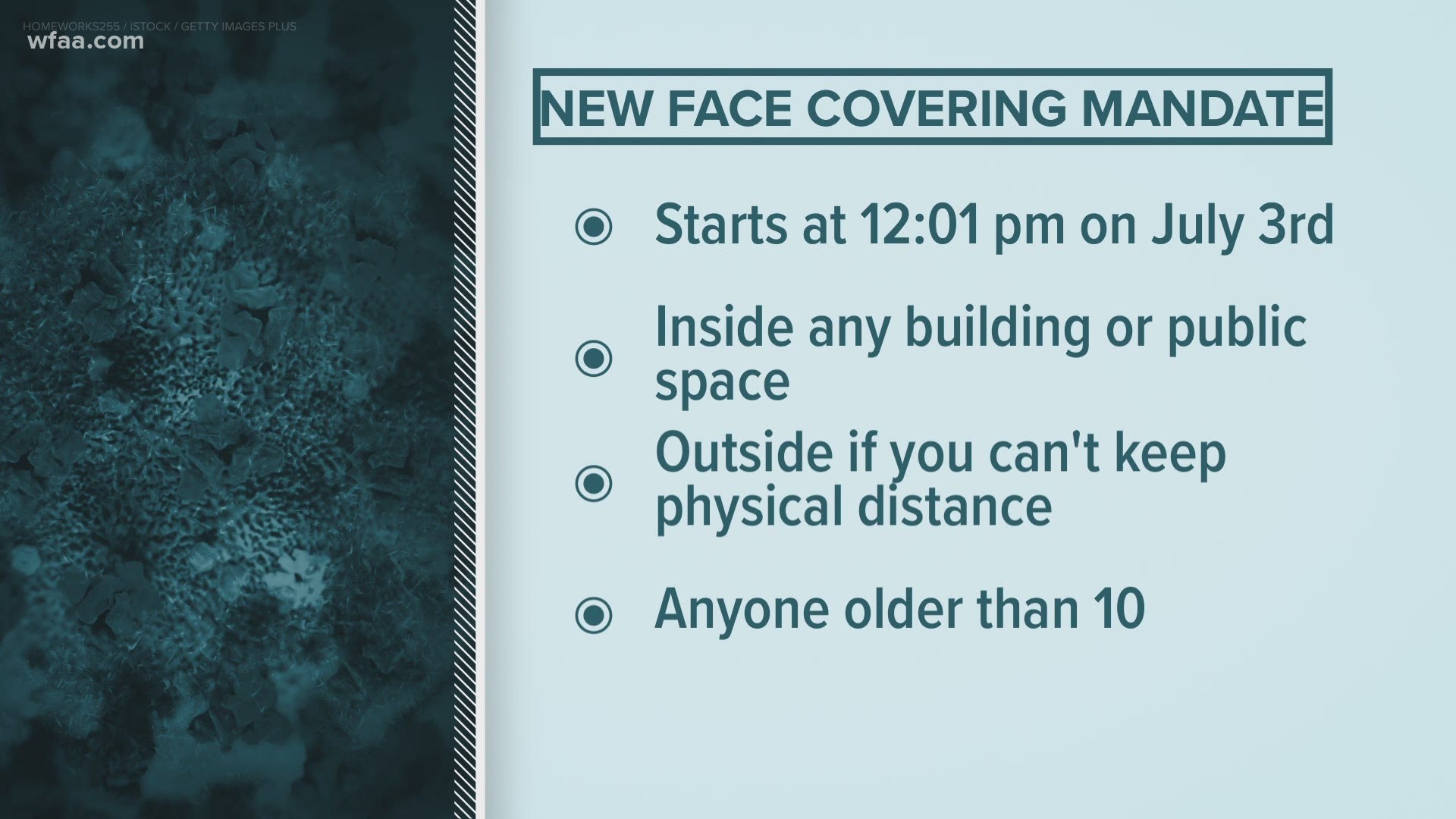 Dallas County leaders praised Gov. Greg Abbott's statewide mask mandate Thursday but warned that COVID-19 cases and hospitalizations could surge if people exhibit the same behavior Fourth of July weekend as they did for Easter and Memorial Day.

"It really stinks and I hate saying it but if you can find a way to celebrate this July fourth with only your people that you're around daily… because things are out of control," Jenkins said. "And we saw that huge jump after Memorial Day and Passover Easter. We cannot afford it."

Jenkins said hospitals and the economy couldn't handle if "we let our guard down this weekend." He explained that it took less than two weeks after Easter and Memorial Day to see spikes in cases and hospitalizations, which he said were due to people celebrating with extended family and friends.

“We cannot have another Memorial Day over this July fourth weekend," Huang said. "If this happens, it will really be catastrophic.”

Huang said the county expects to report more than 1,000 new cases on Friday, after setting a daily record Thursday with 708.

"This is very very important. We’re asking you not to go to large events, to stay home as much as possible, distance 6 feet and wear that mask," Jenkins said.

Jenkins and Huang said they were grateful for the statewide mask order, which goes into effect Friday at 12:01 p.m.

Gov. Greg Abbott announced a statewide mask mandate Thursday, which also stated that mayors and county judges have the ability to impose restrictions on some outdoor gatherings of over 10 people.

Thursday night, Collin County Judge Chris Hill issued a proclamation saying that, "citizens are permitted to have outdoor gathering of 10 or more people."

An Arlington woman in her 80s and a Fort Worth woman in her 70s were the latest coronavirus-related casualties in the county, officials said. Both had underlying health conditions.

The county has tallied 233 confirmed deaths from COVID-19 since tracking began in March.

There have been 13,423 confirmed cases since tracking began.

There were 44 additional hospitalizations for COVID-19 reported Thursday, bringing the countywide total to 516.

This brings the countywide total to 3,199 cases and 2,476 recoveries since tracking began in March.

There are currently 158 patients hospitalized due to COVID-19.

The county reported more than 600 daily cases for the first time Tuesday.

County health officials link the increases in daily cases to more people socializing at larger events and at house parties.

More than 54 of the coronavirus cases reported in the past month have been among children and staff at child care facilities. One daycare employee has been hospitalized in critical care, according to the Dallas County report.

There have been 387 total coronavirus-related deaths reported in Dallas County since tracking began in March.

About one-third of those have been linked to long-term care facilities.

The latest deaths include:

Thirty-seven residents have died since tracking began in March.

According to Collin County health officials, the victim did not have any underlying health conditions.

The man is the 44th resident to die in the county due to the novel coronavirus, officials say.

As of Thursday morning, the Texas Department of State Health Services reported 3,114 countywide cases since tracking started in March.

County officials say 2,396 residents have recovered from the disease.

Texas hospitals to receive $2.67B in federal funding for Medicaid patients

State officials announced Thursday that $2.76 billion in federal funding has been approved for Texas hospitals treating people who receive Medicaid.

The funding is part of the statewide Uniform Hospital Rate Increase Program which increases payments to hospitals treating patients who have Medicaid. The latest funding is a more than $1 billion increase from the previous fiscal year, according to state officials.

"As we respond to the COVID-19 pandemic, the state is committed to ensuring that our hospitals have the resources they need to continue providing care to Texans," Gov. Greg Abbott said in a written statement.

Face coverings required at Dallas airports ahead of holiday travel

As the holiday weekend approaches, DFW Airport has announced it will now require passengers and employees to wear face coverings.

As of Thursday, anyone over the age of 2, is required to wear a mask not only at the terminals but also in the parking garages, the Skylink, and rental car facilities.

The measures at DFW Airport are similar to those already in place at Dallas Love Field, which requires masks for anyone over the age of 10.

People are allowed to take off their masks while eating or drinking, and also when identifying themselves to TSA, at customs, or anywhere else where ID is required.

In addition to face-mask policies, flyers will be limited with their holiday travel, as Galveston and Padre Island will be shut down during the upcoming weekend.

Texas reported more than 8,000 new cases of COVID-19 on Wednesday, which marked a new record for cases reported in one day.

RELATED: Galveston beaches will be closed this Fourth of July weekend

The City of Farmers Branch has announced the cancelation of its July 2 fireworks show due to safety concerns regarding COVID-19.

"Due to significant concerns about the spread of COVID-19 as well as prohibitions on gatherings of greater than 100 people, the City of Farmers Branch has joined other area cities in making the decision to cancel our July 2 Independence Day fireworks show."