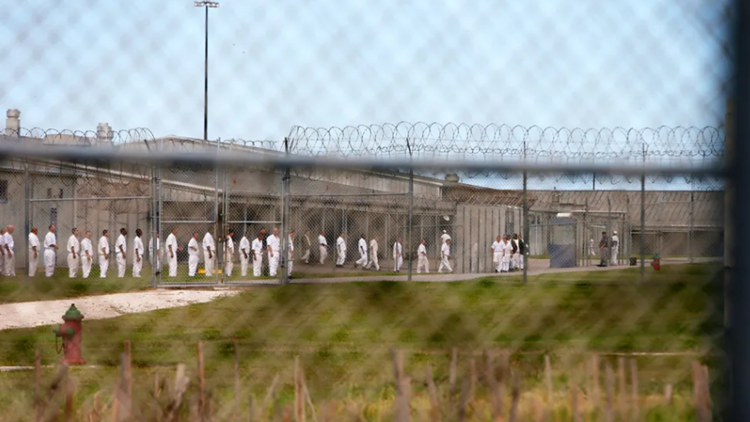 Photo by: Jennifer Whitney for the Texas Tribune
Inmates at a correctional facility in Texas

This story originally appeared in the Texas Tribune.

Editor's note: This story has been updated throughout.

The first Texas prisoner has tested positive for the new coronavirus.

The Texas Department of Criminal Justice said Tuesday the 37-year-old man, who has a preexisting respiratory condition, is being treated at the prison system’s hospital in Galveston and has been there for three days. He was in TDCJ custody a little less than a month after a conviction in Harris County on two drug possession charges. The results come one day after the agency reported that a prison counselor who worked at a different facility tested positive.

The prisoner was evaluated Saturday at the Lychner State Jail north of Houston after reporting shortness of breath and a cough, according to a statement from the department. He was sent to Memorial Hermann Hospital in Houston before being transferred to Galveston for testing for the new coronavirus. The agency said he is in good condition.

Other inmates and prison staff who may have had contact with the man are being medically restricted, limiting their movement.

“TDCJ is saddened to learn of this positive case in an offender, but the agency is well prepared to handle this challenge,” said Bryan Collier, TDCJ’s executive director. “Our coronavirus protocol was developed exactly for a situation like this. Our prayers are with the offender and his family as he recovers from this illness.”

On Monday, TDCJ announced that a substance abuse counselor working in Jester I, a drug treatment prison west of Houston, had also tested positive for the virus. The counselor went to the doctor after work March 17 but returned to work Saturday — not realizing his doctor had tested him for the virus, according to a department statement. He spoke with several prisoners Saturday, but they were all housed in solitary cells and communicated only through their cell doors. After his test results came in Monday, other employees he’d come into contact with were sent home for self-quarantine.

Prisons and jails are incubators for disease, marked by often unsanitary conditions and cramped housing. Cleaning supplies and hand sanitizers are often considered contraband, and simple things like running water and soap can be hard to come by.

In preparing for exposure to the virus, which had infected at least hundreds of Texans and killed 11 by Tuesday, TDCJ said it began checking temperatures of employees and new inmates coming into prison units last week. All inmate visitation was canceled shortly after Gov. Greg Abbott declared a public health disaster earlier this month.

But the prison system can’t test for coronavirus, according to agency spokesperson Jeremy Desel. A test has to be ordered by a doctor, often after a prisoner has been transported to an outside hospital for treatment of an illness. Desel said Tuesday that 19 inmates had been tested, including the positive case, and the tests were all done at off-site hospital facilities. Of those, eight were negative and the others were pending results. Among prison employees, at least 51 had reported being tested, with the one positive so far, 22 negatives and 28 pending, Desel said.

Other inmates who had symptoms linked to the coronavirus or the flu but hadn’t undergone testing were being medically isolated from other prisoners, Desel said last week.

“We’re still right there in regular flu season,” he said.

Prison reform advocates across the country have called for the release of some prisoners as COVID-19, the disease caused by the new coronavirus, continues to spread. In Texas, a group of advocates asked Abbott last week to quickly free those who qualify for early release or have been approved for parole, and to consider release for Texas’ growing number of older and chronically ill inmates.

“Even one case will strain the prison health care system to its maximum capacity, and will likely result in already-understaffed facilities becoming dangerously understaffed,” the group of advocates wrote in a letter to the governor last Monday. “It is critical for the State to immediately decrease the population, as other states and countries are doing, while implementing rapid and measured infection-control protocols.”