For the fourth straight day, India set a global daily record for new infections spurred by an insidious new variant. 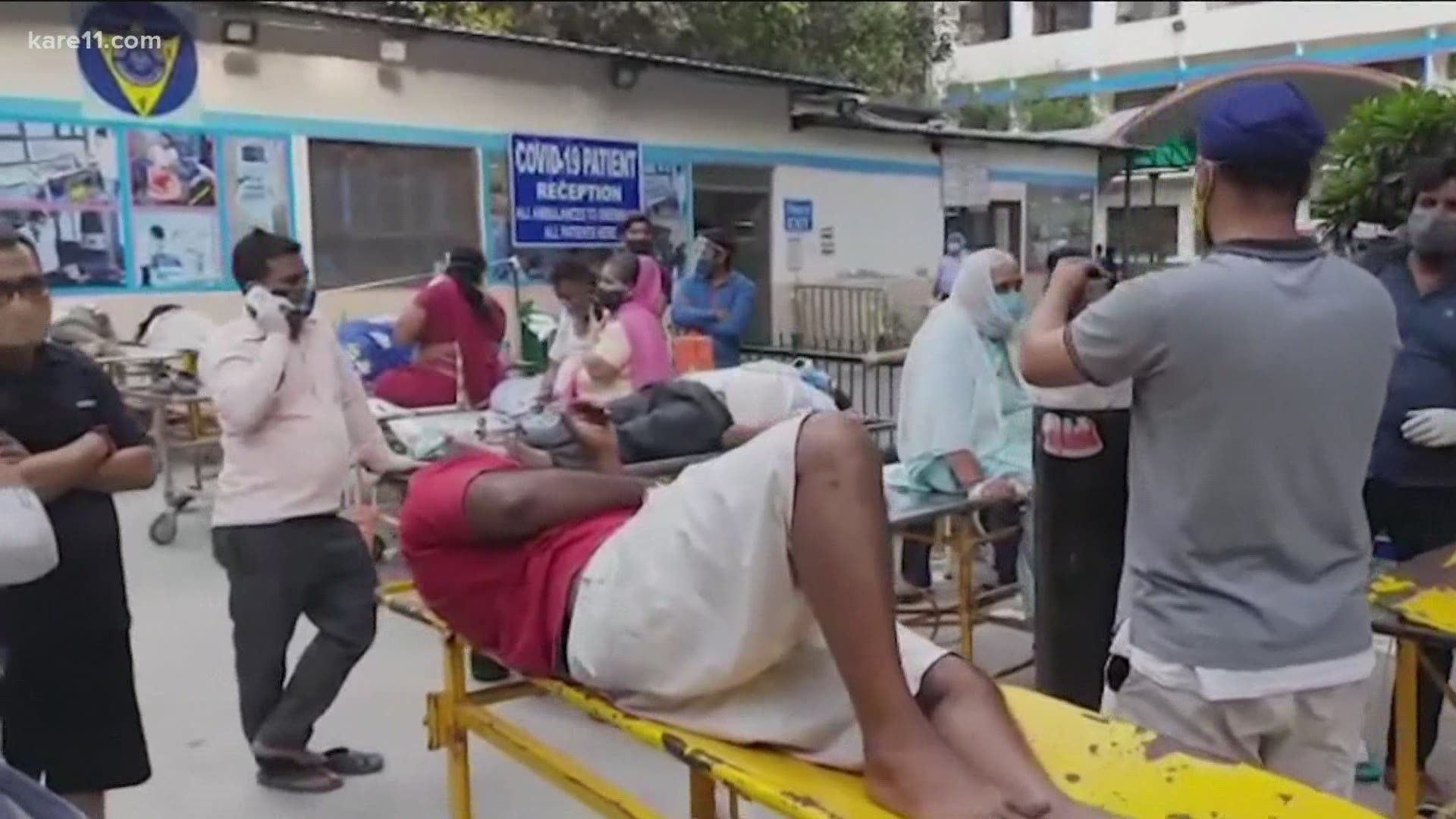 NEW DELHI, Delhi — With life-saving oxygen in short supply, family members in India are left on their own to ferry coronavirus patients from hospital to hospital in search of treatment as the country is engulfed in a devastating new surge of infections. Too often their efforts end in mourning.

The stories are told on social media and in television footage, showing desperate relatives pleading for oxygen outside hospitals or weeping in the street for loved ones who died waiting for treatment.

One woman mourned the death of her younger brother, aged 50. He was turned away by two hospitals and died waiting to be seen at a third, gasping after his oxygen tank ran out and no replacements were to be had.

She blamed Prime Minister Narendra Modi’s government for the crisis.

“He has lit funeral pyres in every house,’’ she cried in a video shot by India’s weekly magazine The Caravan.

For the fourth straight day, India on Sunday set a global daily record of new coronavirus infections, spurred by an insidious new variant that emerged here. The surge has undermined the government’s premature claims of victory over the pandemic.

The 349,691 confirmed infections over the past day brought India’s total to more than 16.9 million cases, behind only the United States. The Health Ministry reported another 2,767 deaths in the past 24 hours, pushing India’s fatalities to 192,311.

Experts say this toll could be a huge undercount, as suspected cases are not included, and many COVID-19 deaths are being attributed to underlying conditions.

The unfolding crisis is most visceral in India's overwhelmed graveyards and crematoriums, and in heartbreaking images of gasping patients dying on their way to hospitals due to lack of oxygen.

Burial grounds in the capital New Delhi are running out of space. Bright, glowing funeral pyres light up the night sky in other badly hit cities.

In the central city of Bhopal, some crematoriums have increased their capacity from dozens of pyres to more than 50. Yet officials say there are still hours-long waits.

At the city’s Bhadbhada Vishram Ghat crematorium, workers said they cremated more than 110 people on Saturday, even as government figures in the entire city of 1.8 million put the total number of virus deaths at just 10.

“The virus is swallowing our city’s people like a monster,” said Mamtesh Sharma, an official at the site.

The unprecedented rush of bodies has forced the crematorium to skip individual ceremonies and exhaustive rituals that Hindus believe release the soul from the cycle of rebirth.

“We are just burning bodies as they arrive,” said Sharma. “It is as if we are in the middle of a war.”

The head gravedigger at New Delhi’s largest Muslim cemetery, where 1,000 people have been buried during the pandemic, said more bodies are arriving now than last year. “I fear we will run out of space very soon,” said Mohammad Shameem.

The situation is equally grim at unbearably full hospitals, where desperate people are dying in line, sometimes on the roads outside, waiting to see doctors.

Health officials are scrambling to expand critical care units and stock up on dwindling supplies of oxygen. Hospitals and patients alike are struggling to procure scarce medical equipment that's being sold on the black market at an exponential markup.

The drama is in direct contrast with government claims that “nobody in the country was left without oxygen,” in a statement made Saturday by India’s Solicitor General Tushar Mehta before Delhi High Court.

The breakdown is a stark failure for a country whose prime minister only in January had declared victory over COVID-19, and which boasted of being the “world’s pharmacy,” a global producer of vaccines and a model for other developing nations.

Caught off-guard by the latest deadly spike, the federal government has asked industrialists to increase the production of oxygen and other life-saving drugs in short supply. But health experts say India had an entire year to prepare for the inevitable — and it didn’t.

Dr. Krutika Kuppalli, assistant professor of medicine in the division of infectious diseases at the Medical University of South Carolina, said the government should have used the last year, when the virus was more under control, to stockpile medicines and develop systems to confront the likelihood of a new surge.

“Most importantly, they should have looked at what was going on in other parts of the world and understood that it was a matter of time before they would be in a similar situation,’’ Kuppalli said.

Instead, the government’s premature declarations of victory over the pandemic created a “false narrative,” which encouraged people to relax health measures when they should have continued strict adherence to physical distancing, wearing masks and avoiding large crowds.

Modi is facing mounting criticism for allowing Hindu festivals and attending mammoth election rallies that experts suspect accelerated the spread of infections. At one such rally on April 17, Modi expressed his delight at the huge crowd, even as experts warned that a deadly surge was inevitable with India already counting 250,000 new daily cases.

Now, with the death toll mounting, his Hindu nationalist government is trying to quell critical voices.

On Saturday, Twitter complied with the government’s request and prevented people in India from viewing more than 50 tweets that appeared to criticize the administration’s handling of the pandemic. The targeted posts include tweets from opposition ministers critical of Modi, journalists and ordinary Indians.

A Twitter spokesperson said it had powers to “withhold access to the content in India only” if the company determined the content to be “illegal in a particular jurisdiction.” The company said it had responded to an order by the government and notified people whose tweets were withheld.

India’s Information Technology Ministry did not respond to a request for comment.

Even with the targeted blocks, horrific scenes of overwhelmed hospitals and cremation grounds spread on Twitter and drew appeals for help.

Dr. Anthony Fauci, the Biden administration’s top medical adviser on the pandemic, told ABC’s “This Week” that the U.S. would review how to increase India’s vaccine supply, such as by sending doses or helping India “to essentially make vaccines themselves.”

The White House said national security adviser Jake Sullivan spoke by phone Sunday with his Indian counterpart, Ajit Doval, and that the U.S. is ‘’working around the clock" to send supplies.

The Indian government did not immediately respond to Qureshi’s statement.