Last month, the governor did not take action against a similar Thanksgiving weekend curfew imposed in San Antonio and Bexar County. 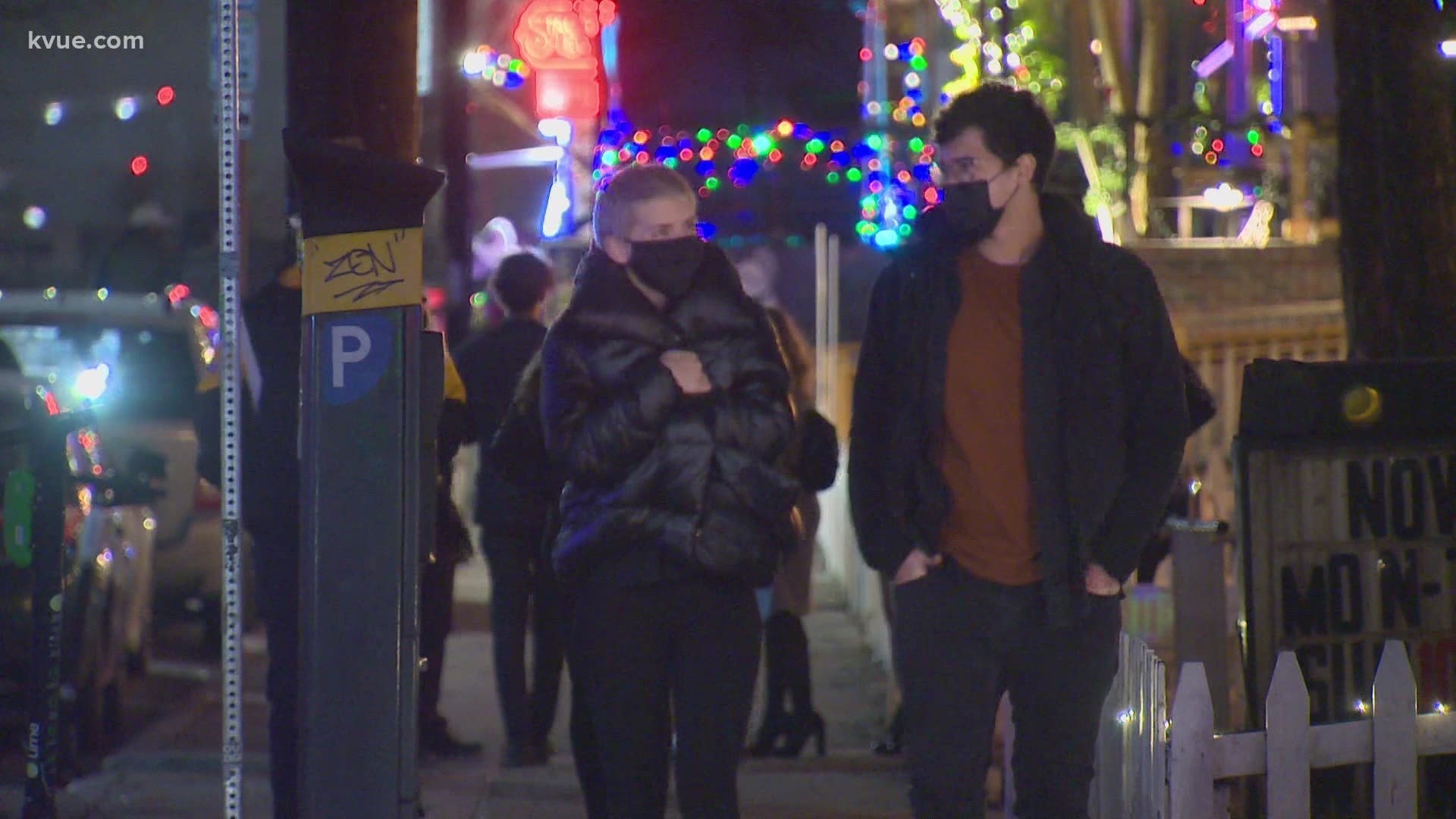 AUSTIN, Texas — A Travis County district judge has sided with the City of Austin to keep the New Year holiday restrictions on dine-in services at Austin-Travis County bars and restaurants.

District Judge Amy Clark Meachum denied the requests for temporary restraining order and temporary injunction filed by the State of Texas, saying "the State has not demonstrated a probable right to the relief sought nor imminent and irreparable harm."

“My priority during this pandemic is to protect the health and safety of our community. I issued this order based on the advice of our health officials, including Dr. Mark Escott, and the alarming increase of COVID-19 cases in Travis County. Today’s ruling will help our community slow the spread of COVID-19, while allowing businesses to safely continue their operations through takeout, drive-thru, and delivery service options. I encourage everyone in Travis County to order food for takeout from a local restaurant and to celebrate the New Year safely at home tonight.”

Travis Co Judge Andy Brown in part in a statement:
“My priority during this pandemic is to protect the health and safety of our community..." @KVUE

"We are trying to save as many lives as we can, guided by the doctors and the data. We’re encouraged the District Court agreed that cities have the authority to react to local conditions and protect their residents when the state won’t. This is not a drill - Austin is experiencing uncontrolled spread of the virus.

Whether this court’s ruling stands or not, the bigger concept is that each of us has the power to protect our neighbors and save lives by the choices we make as individuals.  Celebrate at home, order out and tip generously. There’s no better way to bring in the new year than in solidarity with our neighbors."

However, the orders intended to limit the spread of COVID-19 during the holidays were not met with praise by Gov. Greg Abbott and Texas Attorney General Ken Paxton. Paxton's office called the orders unlawful and filed a lawsuit against them. KVUE spoke with Austin Mayor Steve Adler about the orders on Wednesday.

"We think that it's proper and necessary," Adler told KVUE. "And, quite frankly, it's what we need to do in order to keep the community safe. The number of people in our ICUs has gone up almost 70% since Dec. 21 in just over a week. That's getting us up to 140 people in our ICUs."

Under the governor's order, counties may only scale back if they meet certain criteria, which were set by the State. If COVID-19 patients make up more than 15% of all hospital beds in one region for more than a week, counties in that region can limit capacities at places like restaurants, stores and other indoor facilities. COVID-19 patients currently make up 13% of all Austin-area hospital capacity and 34% of ICU capacity.

The mayor said the curfew does not violate the governor's order's because it's an "operational constraint." He said the order has been issued "in a way that our lawyers tell us is appropriate."

Last month, the governor did not take action against a similar Thanksgiving weekend curfew imposed in San Antonio and Bexar County.

The Austin Police Department also confirmed to KVUE that it would increase its patrols downtown for New Year's Eve.

"All shifts will be staffed at 100% to ensure that we have resources available for any public safety needs," an APD spokesperson said.

"The Governor's statewide executive order allows food establishments to be open for in-person dining on New Year's Eve as authorized by the Texas Alcoholic Beverage Commission. They should remain open. Happy New Year!"

“The Governor’s statewide executive order allows food establishments to be open for in-person dining on New Years Eve as authorized by the Texas Alcoholic Beverage Commission.  They should remain open. Happy New Year!”

"The Governor, a former Supreme Court Justice, is telling Texans to break the law because he disagrees with the judicial branch’s ruling," Eckhardt tweeted. "This is extremely damaging to our separation of powers and Governor Abbott should know better."

After the decision from Judge Meachum, Paxton filed an appeal in the Austin-based Third Court of Appeals, urging the court to halt enforcement of Austin Mayor Steve Adler’s and Travis County Judge Andy Brown’s orders.

By 10 p.m. on New Year's Eve, the Third Court of Appeals had denied Paxton's emergency appeal, Adler confirmed to KVUE.