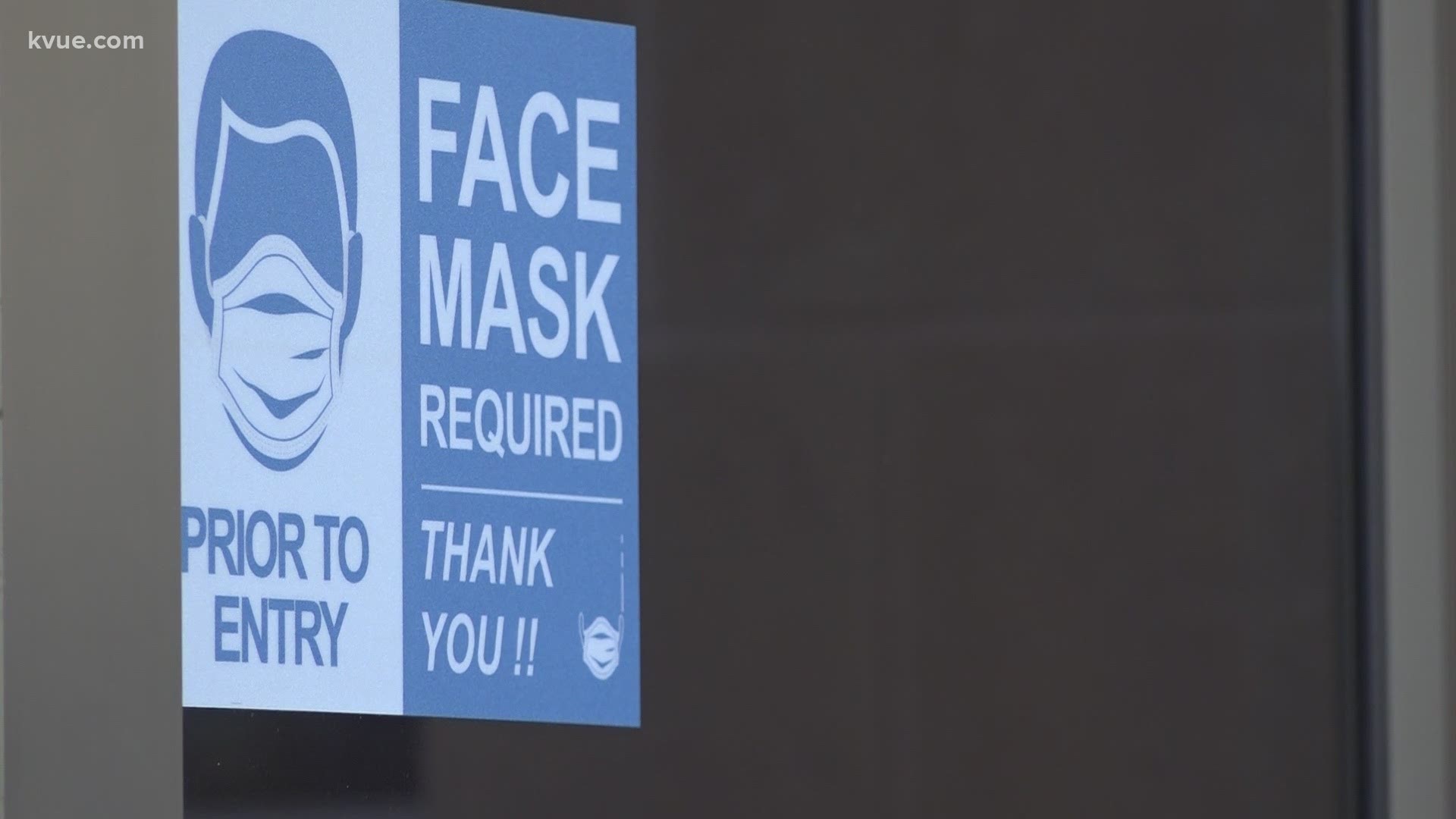 AUSTIN, Texas — The City of Austin will continue to require wearing masks in the community, according to City leaders.

The statewide mask mandate will lift on Wednesday, March 10, according to Gov. Greg Abbott's order from last week. Gov. Abbott announced on March 2 that he is opening Texas "100%" in addition to lifting the mask mandate in Texas.

"We believe in masking. We know it works," said Dr. Mark Escott with Austin Public Health on Tuesday. "We saw the dramatic impact that the masking mandate had when it was issued by the governor on July 2, with almost two weeks to the date, a substantial and sustained decrease in transmission. We need that to continue. We need the efforts to continue. We need people to continue to mask and distance and do those things that have gotten us out of surge here in Travis County. So our hope is that people, our community, our elected officials, will continue to echo the message that these protective measures, these nonpharmaceutical interventions work and they're important for us to continue with that transition."

The City of Austin said health authority rules initially adopted in July 2020 remain in place through April 15, 2021, unless modified or extended. Under those rules, businesses and other sites must require individuals to wear a face covering, with some exceptions. Businesses should also clean and disinfect high-touch items, require at least 6 feet between groups of 10 or fewer, and post face covering and hygiene signage. Those in the City of Austin must wear face coverings when outside their residence.

Rules also require anyone over the age of 6 to wear a face covering when on or in City property, with those rules set to expire on July 8.

“In Austin, we’re committed to saving lives. Period. If state officials don’t want to do their jobs protecting people from the virus, then we will,” said Austin City Council Member Greg Casar on Tuesday. “This action is both legal and the right thing to do. If state officials choose to sue, they’ll be going out of their way to harm the health of Texans. We've had too many family members, too many friends, too many constituents die for us to stop listening to science. Local leaders will continue doing everything in our power to take care of Texans.”

🚨BREAKING: the City of Austin is still legally requiring masks in our community, through our health authority rules. If state officials don’t want to do their jobs in this pandemic, then we’ll do it ourselves.

Prior to Tuesday, many Austin-area restaurants and stores had already posted on social media saying they will continue requiring masks and implementing safety measures even after the mandates are lifted on March 10. Abbott's announcement does not order businesses to lift their own mask requirements and capacity limits.

"We still have health authority rules in effect, which require masking in businesses throughout the city and the county," Dr. Escott added. "Those things will stay in place. The enforcement of those will stay in place because we have to continue to protect our community so that we can save lives at any thought on the reinfection rate with the variance."

Dr. Escott said that if an individual enters a business without a face covering and they refuse to comply or leave, they could be arrested for trespassing. They cannot be arrested solely for not wearing a mask.

According to local orders enacted by Dr. Escott, noncompliance could also result in a Class C misdemeanor punishable by a fine of up to $2,000, with the actual fine to be determined by a judge or a jury in a municipal court. Complaints can be made to Austin 311.

"Austin Code will continue enforcing the City of Austin Health Authority Rules. During this time, Code and other City departments will be re-educating the community on those protections," a department spokesperson said Tuesday.

“Dr. Escott is the appointed public health physician and expert to whom our community entrusts our public health. His opinions, based on science, and data which further supports CDC guidelines, have been consistent and have been and are reflected in the orders he has issued. He is committed to defeating COVID-19 in Austin and Travis County and the City will employ whatever tools are available to support his orders for the sake of all Austin schools, businesses and residents.

“While hospitalizations in the Austin-area have continued to decline, there are indications that this rate is plateauing. The single most effective thing each of us can do to help ensure schools can continue to open to more students in-person and to continue opening businesses, is to wear masks. The public health authority is responsible for the control of disease outbreak in Austin-Travis county and will continue to utilize the rules he has set forth in helping to further mitigate the risk of spread. The rules issued by Dr. Escott will serve to not only decrease the spread of disease but to also increase public confidence in the safety of local businesses.

“The governor said that virus-related policy would be guided by the data and the doctors and we remain committed to this end. So, #MaskUpATX.”

When making his announcement last week, Gov. Abbott said businesses are allowed to enforce their own mask requirements and said local governments do have the authority to reinforce safety precautions.

"If COVID hospitalizations in any of the 22 hospital regions in Texas rise above 15% of the hospital bed capacity in that region for seven straight days, then a county judge in that region may use COVID mitigation strategies in their county," Abbott said. "However, under no circumstance can a county judge put anybody in jail for not following COVID orders and no penalties can be imposed for failing to wear a face mask. Also, if restrictions are imposed at the county level, all entities must be allowed to operate at least a 50% capacity."

Over the past seven days, hospital admissions in the local hospital region have been below 7%.

Austin health leaders also announced Tuesday that the City would remain in Stage 4 of its COVID-19 risk guidelines. Dr. Escott said this was based on a recent rise in hospital admissions and concerns over the mask mandate.

"We will continue to monitor the data," said Dr. Escott. "If there is solid indication that we are decreasing in our admissions later in the week, we may make the determination at the end of this week to transition. However, for now, we're going to stay in Stage 4 to ensure that we continue the advocacy and the efforts that got us to this stage and indeed to continue, at least for the short term."

Texas will soon reveal the next groups of people eligible for the vaccine in Phase 1C. Who will be included?