Seven residents have tested positive for COVID-19 at a Denton facility housing hundreds of people with intellectual disabilities, but it has taken days before health officials have been able to begin widespread testing there.

Denton officials expressed frustration that there were not enough testing materials to adequately track the disease inside the Denton State Supported Living Center.

"We’re going to be submitting letters to the governor asking for additional help and resources to help us to combat that there and also to contain it there," said Denton Mayor Chris Watts at a news conference Tuesday.

Apparently that help came Wednesday when Denton County’s public health department confirmed in a statement to WFAA  that “on-site testing has already begun" at the living facility.

A spokeswoman for Texas Health and Human Services, which runs the Denton facility, was not able to give details about the delays in testing, or how many people will now be tested.

Spokeswoman Kelli Weldon said that "there is no higher priority than protecting the health and safety of residents, staff and the local communities in which" the state-supported living centers are located.

Weldon said staff is "working closely" with the Centers for Disease Control and Prevention and the Denton public health department "to determine next steps regarding testing."

Since Saturday, seven residents at the Denton State Supported Living Center have been hospitalized with COVID-19. All tested positive once hospitalized, officials said.

As of Wednesday, 70 people in Denton County have tested positive for the novel coronavirus, including the seven hospitalized from the Denton State facility.

“Our hospitals here in Denton could not handle the overflow that could presumably come from a widespread infection out at that facility,” the Denton mayor said Tuesday.

Since March 16, staff entering the facility have been screened for fever and respiratory illness, according to Texas Health and Human Services officials.

On Tuesday, Denton officials sounded the alarm on a lack of testing at the facility.

“We’ve done the best we can with the resources that we have. We have been strong and vocal advocates for more testing supplies from the very beginning," said Denton County Judger Andy Eads.

He said residents at the living facility have been tested at hospitals when they show respiratory symptoms.

Nonessential visitation and on-campus events – such as family association meetings, volunteer services council meetings and hiring events – were canceled March 13 at the Denton center and the other dozen such centers around Texas.

Details about what testing, if any, is being done at the other state-supported living centers around the state were unavailable Wednesday. 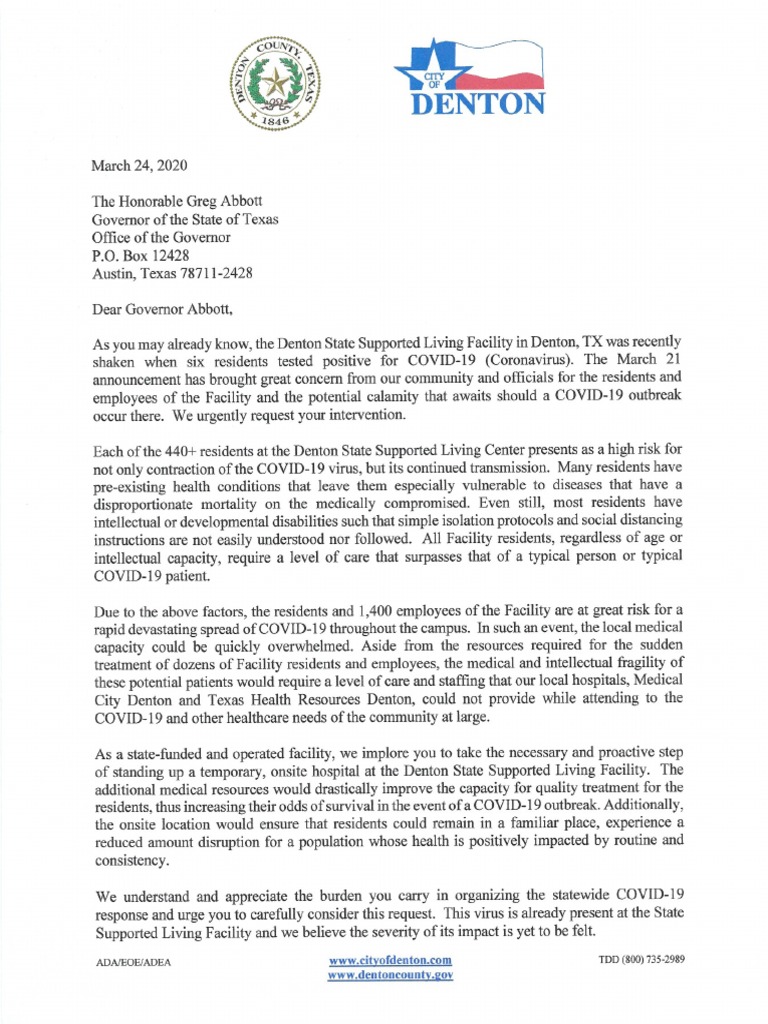