It’s one of life’s little milestones that many of us take for granted. 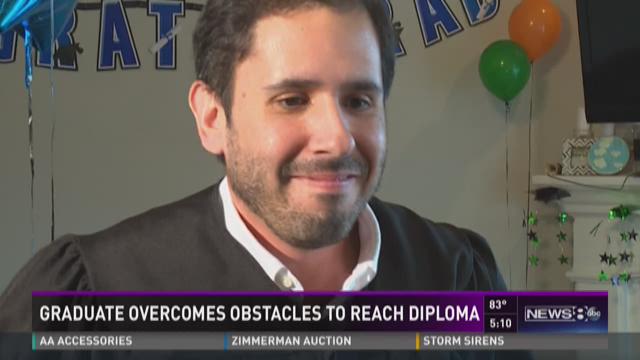 DALLAS — It’s one of life’s little milestones that many of us take for granted.

“I feel like I can do anything now,” said Justin Ozuna. “It’s such a common thing to graduate college, but it’s more than that. I feel like I’m kind of graduating life to some degree.”

Ozuna, 34, is finally receiving his undergraduate degree from UT Dallas.

“I was diagnosed with chronic myeloid leukemia at 24 and I had to drop out of school because insurance became a priority for me and school was a luxury,” Ozuna said.

Between chemotherapy and clinical trials, he dropped out three times over the years.

Ozuna, who is now in remission thanks to a clinical trial at MD Anderson Cancer Center in Houston, said his cap and gown are not just symbols of his academic journey. They represent his strength and perseverance.

“It’s just been a whirlwind for me and my wife Katie,” Ozuna said. “I feel like I’ve been running a marathon for a really long time. To walk across that stage and receive my diploma is something that, it shows me what’s possible."

Possibilities beyond his expectations. He’s also the first in his family to attend college and now graduate.

“I made a decision early on to not let cancer define my life,” Ozuna said. “I wanted to use cancer to encourage and inspire others and to let them know it’s not the end of the world. It’s kind of the beginning of new opportunities.”