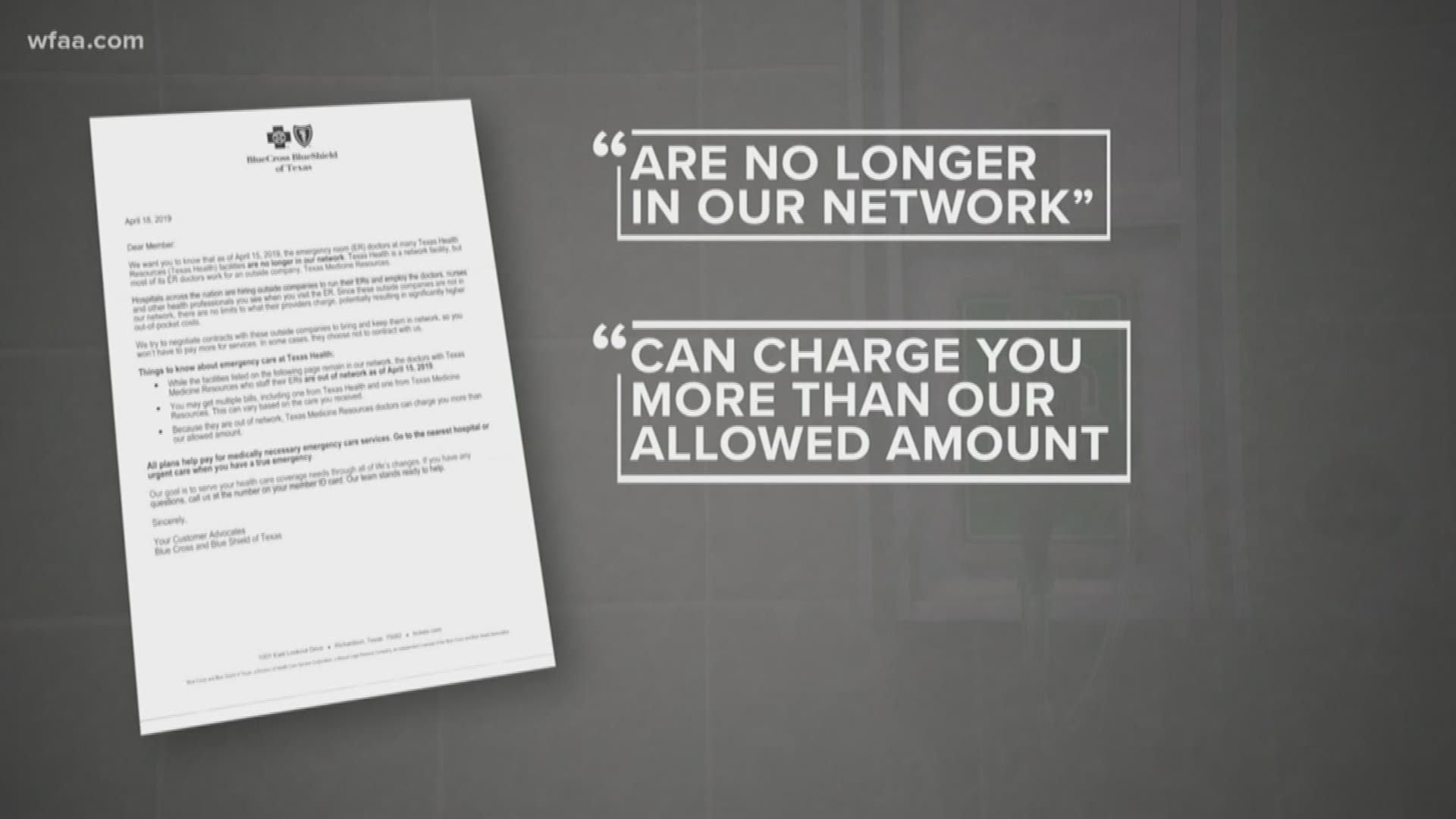 DALLAS — Clarification, April 24, 2019: This story has been updated to clarify that services provided by in-network hospital staff are still covered by BCBS of Texas.

Customers who have health insurance with Blue Cross Blue Shield of Texas could face skyrocketing bills if they use certain hospital emergency room doctors that are no longer in network after negotiations failed between BCBS and the emergency room contractor, according to a statement from BCBS. The change is effective immediately.

When a patient walks into to an ER, they might assume the ER is run by the hospital it's attached to. That's not always the case. While the hospital operates the ER, many ER doctors are actually employed by outside contractors that pair with hospitals.

In the statement, which was also sent to all BCBS Texas customers, the largest health insurance provider in Texas said that as of April 15, Texas Medicine Resources (TMR) ER doctors who work at several Texas Health Resources hospitals will be out of network.

"Since these outside companies are not in our network, there are no limits to what their providers charge, potentially resulting in significantly higher out-of-pocket costs," the letter reads.

The hospitals themselves, which include Texas Health Harris Methodist Hospital, Texas Health Presbyterian Hospital Dallas and Texas Health Arlington Memorial Hospital, will still be in the Blue Cross Blue Shield network, but certain doctors who work in TMR ERs will not.

"TMR terminated their contract with BCBSTX, choosing to leave the networks," BCBS Texas media and public relations director Chris Callahan wrote in a statement to WFAA. "BCBSTX worked hard to keep the doctors in network, unfortunately, their demands were unreasonable."

Callahan stressed that only the doctors are out-of-network, so services performed by hospital staff at these ERs would be covered at in-network pay levels. But it's the ER doctors that now have the ability to charge the patient beyond the insurance payment.

In the wake of the failed contract negotiation, both sides have issued statements about where they stand.

Check out the map below to see which ERs have doctors who are no longer in-network.

The ER doctors are located at the following hospitals:

Customers who do go to these ERs will likely face steep bills, the letter warns.

"Because they are out of network, Texas Medicine Resources doctors can charge you more than our allowed amount."

BCBS urged its members to double-check which hospitals are in-network, and to use an in-network urgent care center or hospital in the case of an emergency.

An urgent care visit, according to BCBS' website, includes, but is not limited to:

BCBS is the largest health insurer in the state of Texas.

What's next? Senate Bill 1264, authored by Senator Kelly Hancock (R-North Richland Hills),would eliminate balance billing from doctors who choose to remain out of insurance networks. The bill passed the Senate last week and now awaits a vote in the House.

We want you to know that as of April 15, 2019, the emergency room (ER) doctors at many Texas Health Resources (Texas Health) facilities are no longer in our network. Texas Health is a network facility, but most of its ER doctors work for an outside company, Texas Medicine Resources.

Hospitals across the nation are hiring outside companies to run their ERs and employ the doctors, nurses and other health professionals you see when you visit the ER. Since these outside companies are not in our network, there are no limits to what their providers charge, potentially resulting in significantly higher out-of-pocket costs.

We try to negotiate contracts with these outside companies to bring and keep them in network, so you won't have to pay more for services. In some cases, they choose not to contract with us.

Things to know about emergency care at Texas Health:

All plans help pay for medically necessary emergency care services. Go to the nearest hospital or urgent care when you have a true emergency.

Our goal is to serve your health care coverage needs through all of life's changes. If you have any questions, call us at the number on your member ID card. Our team stands ready to help.