It is the neighborhood where seven people were shot in a drive-by shooting earlier this month. 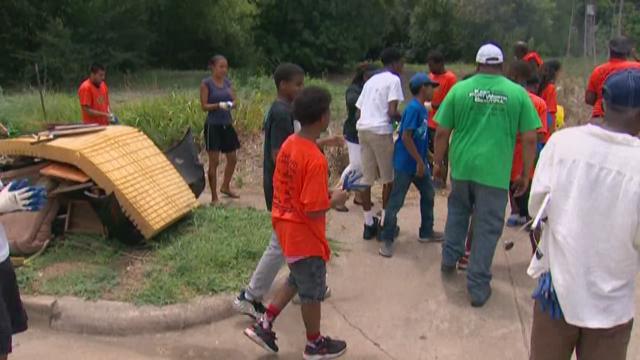 On a steamy hot Monday on Fort Worth's south side, children and adults alike were taking back control of their neighborhood.

"We’re picking up the trash, helping the community, showing next generation this is what you’re supposed to do," says 17-year-old Tristan White, a student at Poly High School.

White was one of a couple dozen volunteers who worked selflessly Monday to beautify a block that's become blighted in recent years.

The chosen location, East Davis Street just off Evans Avenue, was no coincidence. It was the very block where, just 10 days ago, seven people were shot in a drive-by shooting. Two of those victims died.

"When we came to assess the situation, we saw the first thing was we need to clean up," says Rev. Kyev Tatum, who organized the event.

Tatum decided that Juneteenth, also known as Freedom Day or Emancipation Day, was the day to do it.

"We saw Juneteenth as an opportunity to empower people to take back their community," Tatum says.

"It's been the same thing for a long time," says Charles Robinson, who lives nearby. He says the violence his neighborhood experienced recently is always on his mind. He heard about the efforts Monday and stopped by to help out.

"Juneteenth is a day of liberation, and we want to liberate the minds, the hearts and the souls of the Southside," Tatum says.

Making it safer and cleaner is the first step.