"I think it would do, not just justice, but it would do us right," said Arthur Red Cloud of Society of Native Nations. "And we haven't had right for a long time." 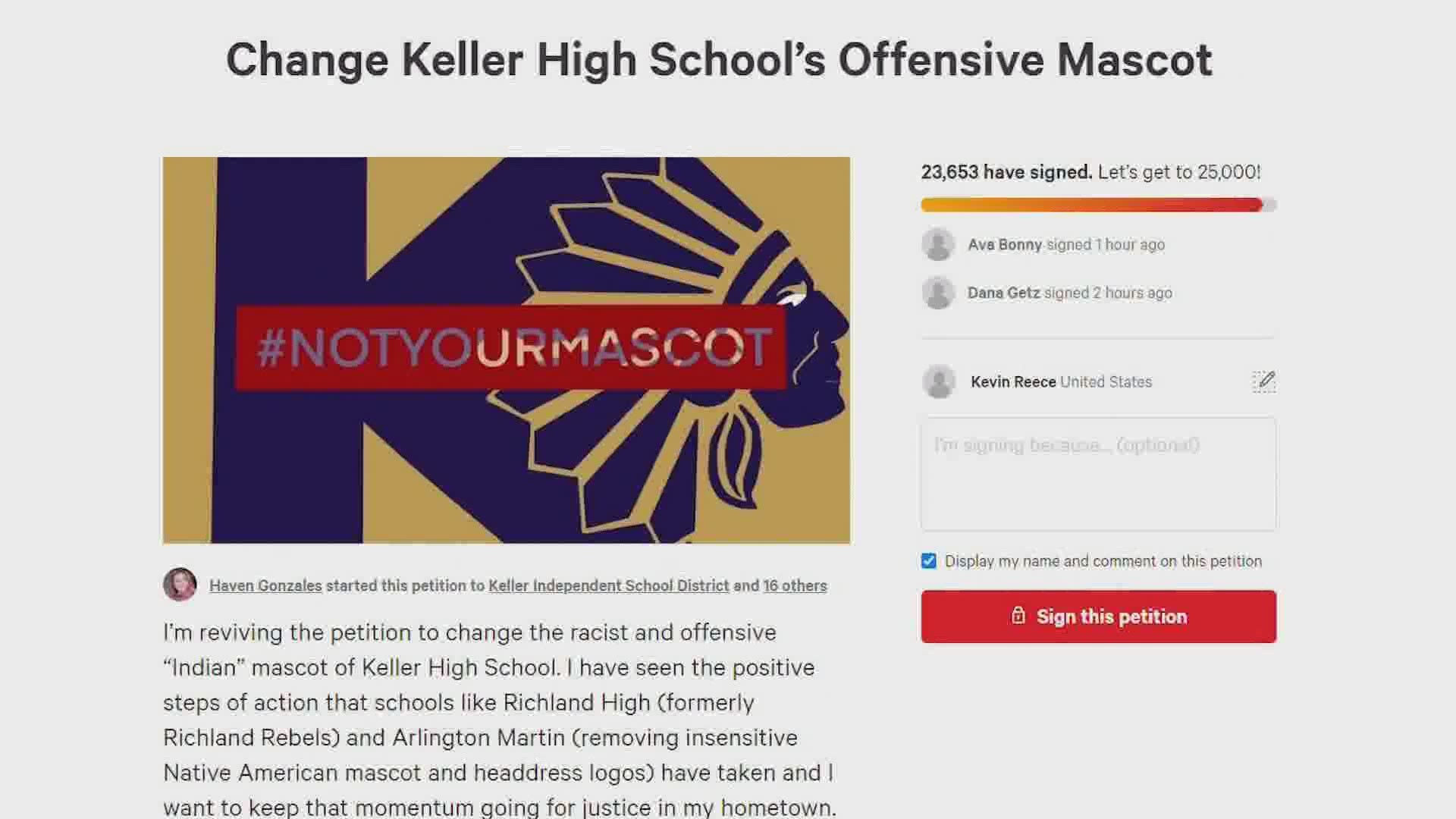 DALLAS — The decision by the NFL's Washington, D.C. franchise to finally retire its nickname and mascot, that Native American groups have complained about as racist for decades, has north Texas advocates hopeful that high schools will strongly consider doing the same.

"A few days of happiness and joy and it's like yes, finally, finally," Native American activist Yolanda Blue Horse said of the NFL team's decision.

"What a lot of people don't understand is that R-word for us, it's equivalent to the N-word," she said.

But she said one fight partially won leads to so many more.

Years ago, along with students and with the support of the Society of Native Nations, she implored the leaders of Keller Independent School District to retire the Keller High School's "Indians" mascot and logo.

The logo pictures an Indian chief in a head dress. The drill team, called the Indiannettes and its team members in Native-American inspired outfits, is one depiction she found particularly offensive.

"We're not characters. We are a race of people," Blue Horse said.

She is originally from the Rosebud Sioux Tribe in South Dakota.

"They're teaching non-native kids that it's OK to dress up like another race of people. It's OK to put on a head dress and do this 'oooh oooh oooh'," she said placing her hand over her mouth. "And we don't do any of that. What they're teaching kids in that school district is wrong."

But a petition to change the mascot three years ago went nowhere. The community and school district stood fast.

Now, however, emboldened by the current environment of protest and change, a north Texas college student started a petition drive again. So far, it has drawn nearly 24,000 signatures of support.

"2020 is the year of like social justice, I was like we can do this. We can finally change this," said Haven Gonzales, a college student in Austin.

She attended Birdville High School and said she was always bothered by the imagery, logo, and costumes at competing athletic games.

"I was like, this is it. People want change. People are demanding change. We're not going to settle for like the way that it's always been."

There is also a competing petition drive to keep the Indian mascot. The petition author, whom WFAA was unable to reach for comment, wrote "our mascot honors Indians and there (sic) traditions..."

In an statement to WFAA, a Keller ISD spokesperson said, "the district is aware of the survey, and as always, will review any material provided by those who are seeking change as well as from those who wish to keep it the same. The input from our community as a whole will be carefully considered."

Activists, however, finally see a chance for change.

"I would ask them to be the first school in Texas to be on the right side of history," said Arthur Red Cloud with the Society of Native Nations.

He said that if a school like Richland Hills can agree to remove its "Rebel" mascot as it did this past month, that Keller could choose to do the same.

"I think it would do, not just justice, but it would do us right," he said. "And we haven't had right for a long time."