HISD given overall grade of 'B' by the state with 250 schools passing, 21 failing

Nine campuses in the state's largest school district were removed from the "Improvement Required" list. 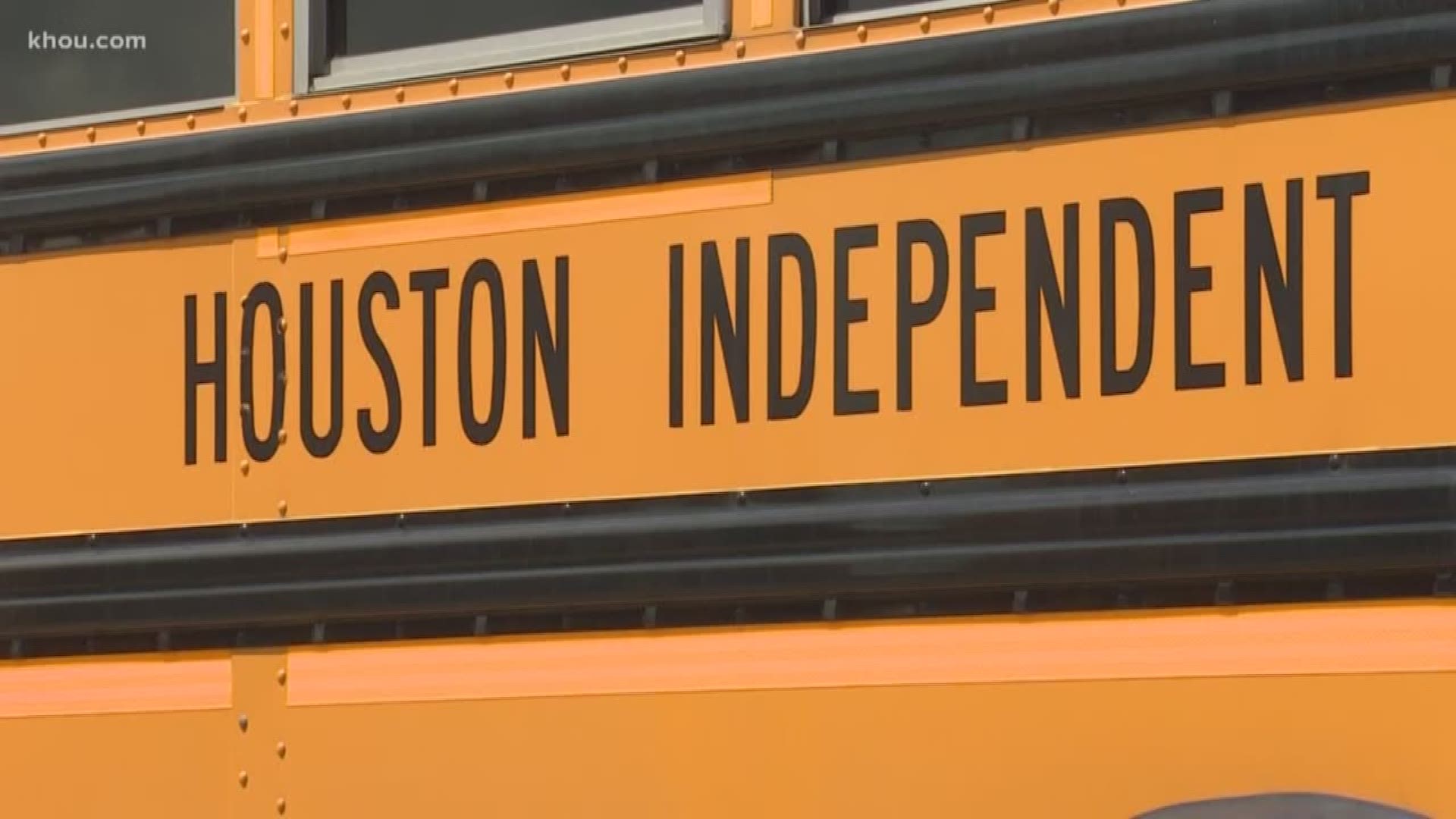 The district received an overall grade of “B" and scored an 88 in the state's report card.

Ninety-two percent of HISD schools (250 out of 271) earned a passing grade, but 21 campuses failed, according to the district.

Nine campuses were removed from the Improvement Required list.

The primarily positive report for the state's largest district comes one week after the TEA said wanted to replace the entire HISD board with a state-appointed board.

The state could take over Houston Independent School District or close one consistently failing school after Thursday’s release of the latest accountability results.

Commissioner Morath, along with Lieutenant Governor Dan Patrick, state lawmakers from both sides, and Aldine ISD officials highlighted the big strides of that campus and the district in the latest ratings.

However, Commissioner Morath left without taking any questions, including the big unanswered one: What does the state plan to do now with HISD?

The TEA can take over a district if a school’s gotten five straight failing grades as of 2018. According to Thursday’s release of 2019 accountability results, HISD’s Wheatley High School made that list.

The TEA could also close the chronically underperforming school or let an outside group run it, an idea the HISD board previously rejected.

“They’ve missed a lot of chances to make a difference, and at least I believe that they’re out of time at this point,” said State Senator Paul Bettencourt, a Republican from Houston and a member of the Texas Senate Education Committee. “I believe a board of governors is almost virtually gonna happen.”

A TEA report recommended the HISD Board of Trustees be replaced by a board of managers appointed by Commissioner Morath. The recommendation is reportedly based on alleged misconduct and other issues, including possible violations of the Open Meetings Act.

“It’s not just one school,” said Rep. Dan Huberty, a Republican Texas House member from Kingwood and Chair of the House Education Committee. “That’s not what the issue is, and sooner or later, you have to have people step up and solve some of these other problems. If you have leadership problems at the top, governance problems at the top, sooner or later you gotta fix them.”

Dr. Granita Lathan, HISD’s interim superintendent, said district officials have reviewed the preliminary accountability results to see if there is any reason they should apply for appeal.

“We don’t see that we have any extenuating circumstances where we would need to appeal, but however we still will go back and look at it,” said Dr. Lathan on Thursday. “We have until October if I’m not mistaken to appeal.”

Dr. Lathan said Wheatley High School will remain open, and her focus will remain on the students as HISD begins its 2019-2020 school year on August 26.

“Our message would be, once again, look at our ‘B’ rating (district-wide),” said Dr. Lathan, when asked what she would say to Commissioner Morath. “If you look at HISD compared to other schools with similar demographics, he will see that HISD is moving in the right direction. Kashmere High School (which boosted ratings from an F in 2018 to a C in 2019) will no longer be the whipping child of the state of Texas.”

The 21 schools are listed at the bottom of this report. You can search your schools grade by using the link below.

Click here to search for a Texas school report card.

Click here to review resources for the 2019 Accountability Rating System

Click here to review the report breakdown on its 2019 A–F Estimator.

“We are extremely proud of all of our teachers, principals, school support officers, and area superintendents for working diligently to help our students succeed,” HISD Interim Superintendent Grenita Lathan said. “Our students demonstrated significant gains, and we are committed to empowering them to thrive academically.”

After being on TEA’s struggling list of schools for eight consecutive years, Kashmere High School earned a passing grade and was removed from Improvement Required status.

“We are rewriting history at Kashmere High, one teacher, one student, one community at a time,” Lathan said. “We never gave up on our students, and with the right support and strategic plan in place, we have changed the narrative.”

RELATED: Upset with your school or district's TEA grade? Here are your options.

Kashmere Principal Reginald Bush said the work will continue on his campus to improve academic achievement.

“We are not going to take our foot off the gas just because we have met and surpassed the goal of getting out of IR,” Bush said. “We will continue onward and upward until we earn an ‘A.’”

The additional eight HISD campuses that successfully exited the Improvement required list after earning passing grades from TEA are:

A total of nine out of the 11 HISD campuses on Improvement Required status earned passing grades.

On Aug. 8, TEA stated it wanted to replace the entire HISD board with a state-appointed board due to months of turmoil.

The recommendation is reportedly based on alleged misconduct and other infractions, including possible violations of the Open Meetings Act.

However, current board President Diana Davila believes the state should wait on any drastic changes.

"They have pretty much sentenced the school district to a takeover," said Davila.
"There is a due process and I feel that due process has been skipped. And it's unfair for the citizens of Houston and the 200,000-plus students that the district must oversee every day."

The reported turmoil included a hasty vote to replace its interim superintendent.

That decision was quickly reversed.

Gov. Greg Abbott has also advocated for state intervention and criticized the district's leadership as a quote "disaster" on Twitter.

"This is politics, you know, and it’s messy,” said Houston Federation of Teachers president Zeph Capo.

Capo has numerous issues with the current board. But he believes local voters should clean house and not bureaucrats in Austin.

“There is a tremendous amount of evidence to show that school board takeovers by the state or others, on the whole, do not work,” said Capo.

He recommended parents and others focus on their neighborhood schools, and not the central office, as we approach another academic year.

HISD itself is not commenting on the TEA’s findings.

"We can confirm TEA has sent a preliminary report to HISD," TEA spokesman Jake Kobersky wrote in a statement. "Because the investigation which spurred this report is still ongoing, and to allow HISD time to respond, we cannot comment further at this time. If you would like additional information on the special investigations unit process, please visit [this] link."

The TEA isn't commenting on the report either, or saying how soon a board of managers might take over.

Meanwhile, Davila said the board is already working to better manage itself by hiring consultants during a recent meeting.

Under state law, the Texas Education Agency takeover can happen if a school’s been labeled “improvement requirement” for five or more consecutive years, starting with the 2013-14 school year.

The other options: Close those chronically under-performing schools; or let an outside group run them.

Here are the 21 schools that received an "F" rating: