Monday night, community members showed up at the Lewisville Independent School District board meeting, asking for transparency from the school district. 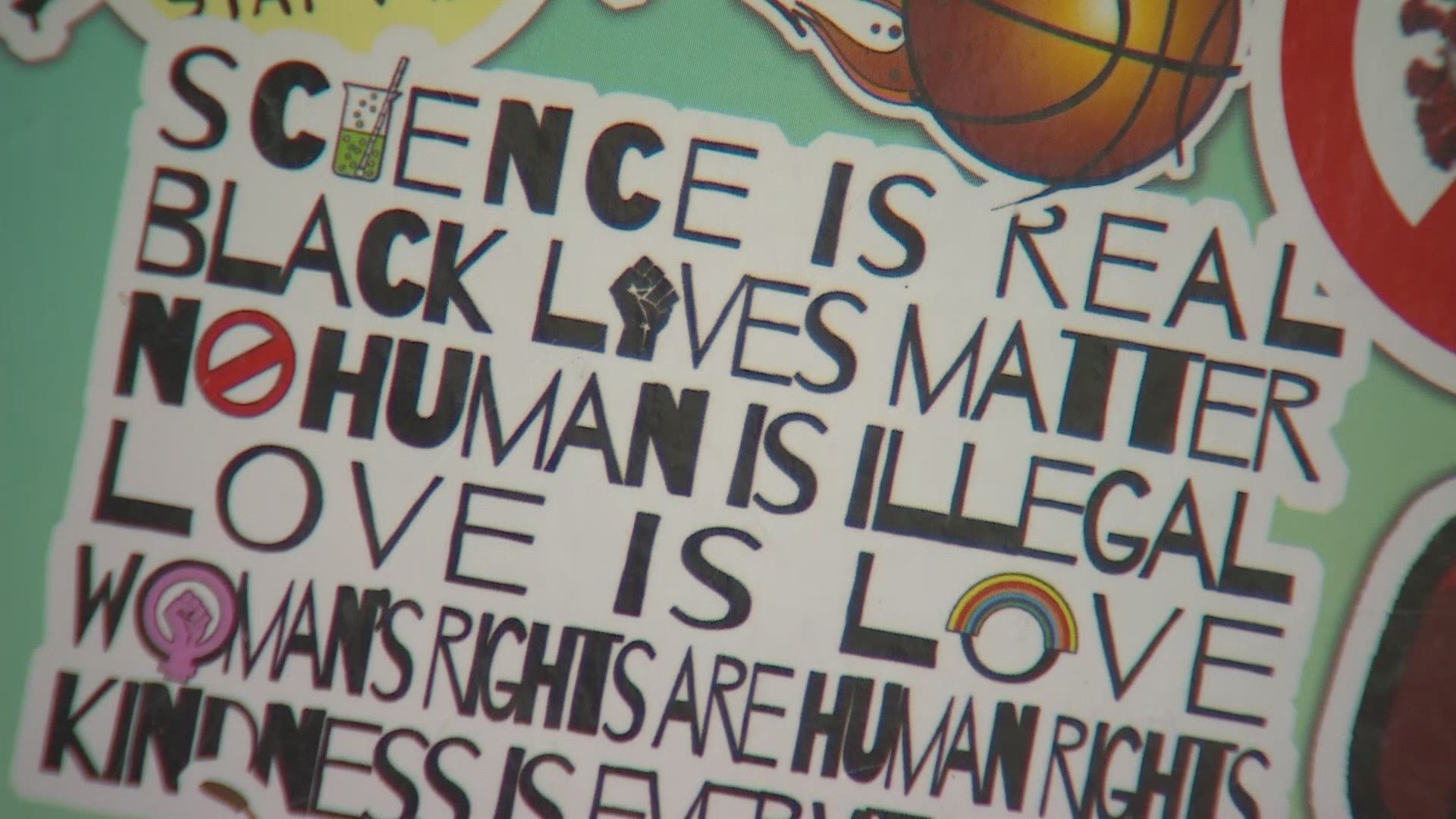 FLOWER MOUND, Texas — Many parents in Flower Mound were upset over the cover of this year's edition of the Downing Middle School yearbook, which caused some controversy because it featured "Black Lives Matter" and "I Can't Breathe" stickers.

Monday night, community members showed up at the Lewisville Independent School District board meeting, asking for transparency from the school district.

“As I said, I want to support Ms. Mick and the yearbook staff. I think the kids did an amazing job on the yearbook,” said one parent at the meeting.

Update: Flower Mound teacher is no longer on admin leave. Last night, more than a dozen community members showed up to the school board meeting asking for more transparency. The art teacher is happy to be back w/her students, but emotionally it's been a rollercoaster ride. @wfaa https://t.co/IaZOh13zN4

The theme of this year's student-designed yearbook for Downing Middle School, according to school officials, was "We Stick Together" and included several stickers featuring "life in 2020-21" on the back, including Minecraft, the Mandalorian, Starbucks, Call of Duty and others. It was the inclusion of two stickers that school officials said caused a stir. One sticker included the quote "science is real, Black lives matter, no human is illegal, love is love, women's rights are human rights, kindness is everything;" the second was of a closed fist with the words "I can't breathe."

“The artwork was chosen that represents major events in the community, around the world,” said Stephanie Bell from Flower Mound.

One former educator at the meeting wondered what precedent disciplining Mick would set for the students.

“My concern, and the reason I wanted to come here tonight, was to understand, what did the teacher, and the principal do wrong? What kind of a message are we sending our children?" said Jocelyn McMurray, a former Lewisville ISD substitute teacher.

“She worked through the system, she got the kids' input, reviewed it, she talked to the principal, the principal approved it,” McMurray later told WFAA.

At end of May, Downing Middle School Principal Curt Martin even offered families the opportunity to get an alternate cover for the yearbook if they wanted it.

WFAA spoke to parents who are in close contact with the teacher. They said the art teacher has missed her kids, and truly loves working at the school, but the last few weeks have been a lot to deal with emotionally.

“She allowed these children to determine what they thought about different topics,” Bell said.

In the end, community members say they want what is best for the kids.

Lewisville ISD sent WFAA the following statement about the controversy, claiming there is "a staggering amount of misinformation" surrounding the story and said Mick's administrative leave concluded on the final day of the school year. In the statement, the district also praised Martin's solution to offer parents an alternative cover for the yearbook. The district said questions still remain about "who was ultimately responsible for the collection of stickers displayed on the yearbook cover."

Read the district's statement in full below.

"There is a staggering amount of misinformation swirling around this story, primarily shared by people with no direct knowledge of the situation, many of whom do not even have a student enrolled at Downing Middle School. It is deeply concerning that rumors are being reported as reality, and it is a disservice to all involved.

"Art teacher Kayla Mick was placed on paid administrative leave, as is the typical district practice, as the district looked into questions surrounding the design of this year’s yearbook, specifically the extent to which students were actually involved in the selection of the stickers in question. It is untrue to claim she was placed on leave for any other reason, and questions remain as to who was ultimately responsible for the collection of stickers displayed on the yearbook cover. Ms. Mick’s administrative leave concluded on the final day of school.

"LISD is conducting an impartial review of this situation in an effort to find the truth, and will not be pressured by loud voices on either side of the issue to be anything less than thorough and fair to all involved. It would be inappropriate for the district to provide more in-depth information to students, families, or community members, just because they want to know. LISD has shared as much information as is appropriate regarding an internal situation with a staff member. The district has not yet concluded its inquiry but expects to do so soon.

"Downing Principal Curt Martin said in a letter to Downing Families, 'When I reviewed and approved the student-designed yearbook, none of the stickers evoked a political message for me, but were rather a documentation of the issues we face as a campus, a community and a nation. I absolutely realize some don’t share that view, including a number of Downing students, staff, and families. For those with concerns, please accept my sincere apology for not considering your perspective on these stickers.'

"LISD fully supports the way Mr. Martin has resolved the yearbook situation, which was to offer an alternate cover to the yearbook for those families who wanted one. This allows families to choose a yearbook cover that best represents their views, and provides an option for all students and families to feel heard. It is inaccurate and irresponsible to make any claims of censorship.

"It is our best hope that all of our teachers connect with students in a way that makes them feel safe and creates a sense of belonging in every classroom. Having said that, we expect staff to remain neutral while engaging students in these conversations, in accordance with district policy.

"LISD believes it has earned the trust of our families and the communities we serve through many positive experiences with our staff and schools. We further believe in being a model of how we would want our students to respond to anything they had a concern over, which is to have conversations with dignity and respect for each other. We will move forward with this situation in a positive manner and appreciate our students, families and communities being part of that forward movement."