Dallas’ top teacher misses his students, but says he is 'scared' to return to the classroom

Eric Hale posted lessons for his young students online all summer. Now that the fall semester is approaching, he’s worried about in-person learning. 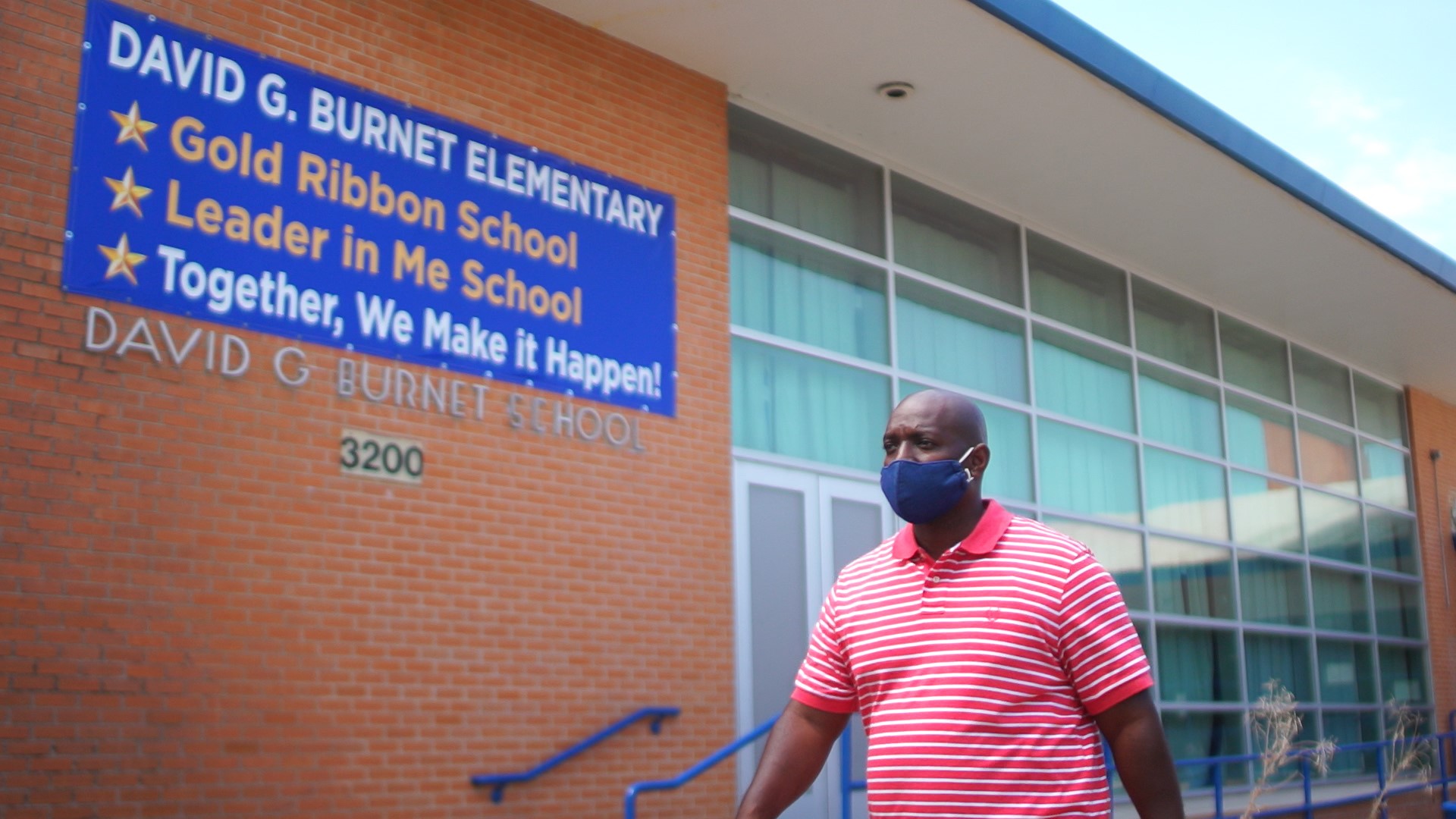 DALLAS — Burnet Elementary in northwest Dallas should be buzzing by early August.

“Usually around this time I’d be bothering my principal to let me sneak in my classroom,” said Eric Hale, who is entering his eleventh year of teaching and his tenth at Burnet.

Mr. Hale’s Classroom of Champions usually has the loudest buzz on campus.

The classroom where Hale is known to host dance parties and DJ while teaching is silent, as are all campuses across the Dallas Independent School District.

“He names all his beats after his kids, so before a reading session, you know, ‘I’m feeling a little Abraham!’ And he’ll put on Abraham’s beat while they’re reading,” explains Hale’s mentee Jordan Dontos.

Hale is known for his ability to engage his students. Through engagement he achieves growth, which is a reason he is the reigning Dallas Independent School District Elementary Teacher of the Year for 2019-2020.

In July he was named the Region 10 Elementary Teacher of the Year.

Credit: Eric Hale
Eric Hale as he was named a finalist for 2019-2020 DISD Elementary Teacher of the Year, an honor he went on to win.

He was also the recipient of the 2019 Queen Smith Award given by The Council of Great City Schools and McGraw Hill Education to the top educator in the country in an urban district.

Days before he was due to receive that award at an event in Kentucky in October, a tornado touched down in Dallas.

While Burnet sustained visible damage, it was able to quickly reopen.

But some of Hale’s students lost everything.

“We didn’t have much to begin with,” he said.

As time passed, scars from that storm began to heal.

“We were right back on the right track. We were pushing forward and the kids in my school were scoring high as usual,” Hale said.

He paused before adding, “and then the pandemic hit.”

COVID-19 shut down schools across the world.

But Hale never fails a test.

“I didn’t want to concede this year,” he said. “I refuse to concede it and say, 'Well this is the year of COVID so my kids aren’t going to do well.’

“My kids are champions. They deserve the best and so I’m going to work hard to give them the best.”

Hale convinced Texas A&M University in Commerce, where he earned his master’s degree, to donate laptops to his students.

Dontos helped raise money to get the students flash cards.

Hale began posting lessons to YouTube in March, and he never stopped.

He’s been teaching online all summer and he’s been texting with families to make sure they know when a new lesson is posted.

“They come from the same cloth that I’m cut from. So, it’s very personal to me that their children do better than them,” he said.

There’s nothing worse than when one of those families seems to disappear.

It’s happened more than once.

Hale recently lost touch with a father who’d been texting Hale pictures of his son’s work all summer long.

But now his phone’s disconnected, “and it’s heartbreaking to me because I can’t find them.”

That is a big reason Hale and other North Texas teachers feels so torn about the fall semester.

“There are some young teachers without pre-existing conditions who feel like it is their duty to be in that classroom,” said Kevin Malonson, executive director of Teach Plus Texas. “Then there are others who are a little bit older, or not even older but with underlying conditions, and - rightfully so - they might be trepidatious about going into the classroom.”

Hale misses faces and chaos and the "aha" moments he sees in his classroom, “and I miss my kids,” he said.

But he admits that he’s afraid to teach in a classroom right now.

“But this is my calling. This is my job,” he added.

“I serve a community where the children might be American citizens, but some of their family members are not. I’ve taught kids who have now dealt with ICE raids, a natural disaster, and a pandemic. And through all that, my school is still an A-ranked school,” he said.

Dallas ISD has pushed back the first day of school to September 8, and the district is hoping to provide both in-person and online education at that time.

Hale taught a combined kindergarten and first grade class last year. He’s now moving to a combined first and second grade class so he can remain with those same students.

He’s worked to sharpen his online teaching skills because, “it’s up to me to become the teacher that they need during this time,” he said.

Hale knows learning via the computer isn't quite as fun as learning in his classroom.

His friend Joe Carreon, who once attended Burnet Elementary and is currently running for Dallas ISD school board, said Hale's enthusiasm puts kids at ease.

“When he acts silly and dances or has students act silly and dance, then it’s OK to make a mistake or mispronounce a word because we’re all in this together to learn," Carreon said.

"That attitude is the most important thing that he brings to the classroom."

Hale hopes even families without kids in his class will visit his YouTube page for help.