'Dial down the rhetoric,' says President Bush as he welcomes newest citizens

The former president re-emphasizes his hopes for comprehensive immigration reform while welcoming newest citizens as a "blessing and a strength" to America. 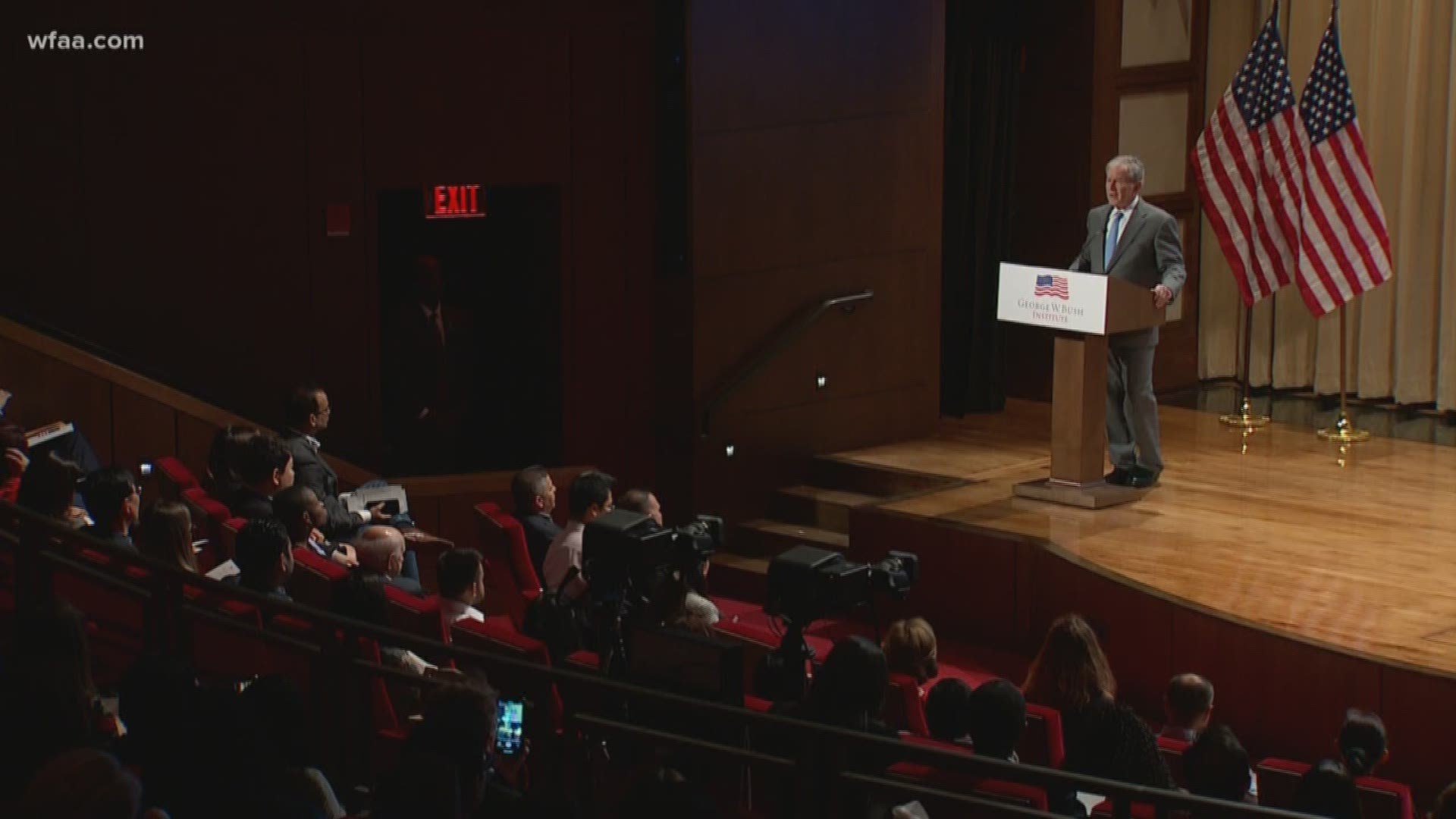 DALLAS — As he asked lawmakers in Washington, D.C. to "dial down the rhetoric" on immigration reform, former President George W. Bush also personally welcomed the 49 newest American citizens who represent the kind of immigration reform he has long sought but was not able to achieve during his presidency.

"I hope those responsible in Washington can dial down the rhetoric, put politics aside, and modernize our immigration laws soon," he said at a Monday morning event at the George W. Bush Presidential Center at Southern Methodist University's campus.

The remarks were part of the comments delivered by Bush and former first lady Laura Bush as they welcomed the newest American citizens from 22 countries at a naturalization ceremony hosted by the George W. Bush Institute.

"May we never forget that immigration is a blessing and a strength," Bush said while also welcoming the immigrants as freshly minted fellow Texans too.

"And if you walk out of here with a little extra attitude in your step, it shows the culture is taking hold," he said to laughter from the crowd.

But the naturalization ceremony, and these most recent immigrants to take the oath of citizenship, also highlighted many of the Bush Institute's very serious recommendations for comprehensive skills-based immigration reform. The institute's recommendations include shifting U.S. immigration policy from family reunification to employment-based migration and to maintain or expand future flows of legal immigration.

Other recommendations include expanding the H-1B high-skilled visa program, eliminating the per-country caps that limit individual countries to a max of 7 percent of total green cards issued in any given year, overhauling the existing H-2A and H-2B temporary visa worker programs, creating a pathway to earned citizenship for undocumented immigrants, and enhancing the enforcement of immigration laws.

"We think there is a role for immigrants of all skill levels. One of the reasons we advocate to a move for a more merit-based system is that it accelerates economic growth," said Laura Collins, the director of the Bush Institute-SMU Economic Growth Initiative. "And one of the things we think is important is more legal opportunities will actually create a safer border."

Felix Odeh is from Nigeria and works in the oil and gas industry. He was easy to find because he ended up arm-in-arm with the President on stage and was grinning ear-to-ear at his newfound citizenship and the luck of getting to recite the Pledge of Allegiance next to the former president.

"I was happy because I never expected that a president would hug me for who I am, irrespective of where I came from," Odeh said.

Shabiha Nymphi from Bangladesh stood next to Mrs. Bush on stage. She is in the U.S. pursuing her MBA and plans to work in the medical field.

"At first we have to look what is best for America," she said of the Bush Institute's immigration reform recommendations. "If those people are coming and contributing to the economy and helping the U.S. to grow, why not."

Juan Carlos Cerda was in the audience, too.  He is not yet an American citizen. He is a "Dreamer" — a DACA recipient in limbo waiting to find out what Congress and the White House will do with the Obama-era program that promised him a path to citizenship.

Monday morning, Cerda was asked to take part in a round-table discussion hosted by the Carnegie Corporation of New York where he was able to thank President Bush for the institute's recommendations for an eventual pathway to earned citizenship for undocumented immigrants.

"We need a solution for us and we also need to keep the country safe," Cerda said afterward. "So we need something that can satisfy both sides and I know deep in his heart that he can do that," he said of President Trump who also greeted the newest Americans via video message.

"The path from application to oath ends on a beautiful morning in the great state of Texas," President Bush told the 49 newest Americans. "Congratulations and may God bless you," he said.

You can read more about the Bush Center's immigration studies and immigrant stories here.