DALLAS - For years, the members of the Dallas police DWI squad were the guardians of the night, protecting the city against drunk and intoxicated drivers and helping prevent deadly accidents.

DALLAS - For years, the members of the Dallas police DWI squad were the guardians of the night, protecting the city against drunk and intoxicated drivers and helping prevent deadly accidents.

The squad once numbered nine or 10 officers strong.

These days, it's a squad of one officer.

“It's pretty shocking that a police department the size of Dallas would be down to one DWI officer,” says attorney Deandra Grant, who defends those accused of drunken driving for a living. 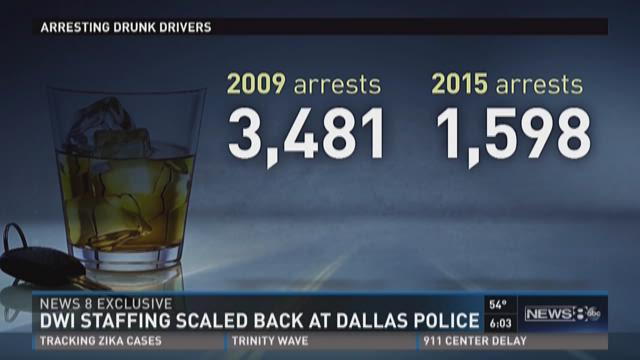 Dallas Police Association president Ron Pinkston met with representatives of Mothers Against Drunk Driving Thursday morning to talk about his concerns about the situation.

“Our concern is that the Dallas Police Department is not being proactive,” Pinkston told News 8. “They’re going to wait until they have another victim before they react and it’ll be too late. We haven’t heard any explanation as to why this has happened.

“We just sat and watched the erosion of the DWI squad from 10 down to one,” he continued. “(It’s) amazing that it’s not a priority for the Dallas Police Department to make sure citizens are safe on the roads.”

MADD officials say they’ve reached out to the department to request a meeting. Their statement noted that Texas led the nation in drunk-driving fatalities with more than 1,400 deaths in 2014.

“Law enforcement officers are our first line of defense against drunk driving and we support the need for strong DWI enforcement in Dallas-Fort Worth, as well as support the necessary funding needed for them to effectively fulfill their DWI enforcement,” said Jason Derscheid, executive director of the MADD North Texas affiliate.

Police Chief David Brown did not respond to a request from News 8 for comment. Deputy Chief Scott Walton, who oversees the traffic division, did not return a phone call.

Since Brown assumed command in 2010, the size of the squad and the corresponding number of DWI arrests has been on a steadily decline. In 2011, the squad made in excess of 800 arrests. The numbers dipped to below 300 in 2015.

“Sometimes you have to shift resources, but I would equate that with … having someone walking around with a loaded shotgun blindfolded. They trip and fall and the gun goes off and you have serious injury or death,” says Thomas Glover, president of the Black Police Association of Greater Dallas. “You can’t take drunk driving lightly. It’s something that has to have a significant amount of resources aimed at stopping it.”

Other communities are devoting significantly more manpower to the issue. For example, Austin currently has a total of about 15 officers and five supervisors. Fort Worth has six officers and two supervisors assigned to its DWI unit.

Grant said she began noticing the disappearance of the DWI squad when unfamiliar names started popping up on police reports.

She said she would rather face a regular patrol officer in court than a seasoned DWI squad officer, who “were really tough witnesses to crack in a DWI trial.”

A patrol officer is going to make a lot more mistakes in large measure because they don’t often testify in DWI cases, she said. They also are more likely to make mistakes when conducting standardized field sobriety testing.

The key word is “standardized.”

“There are very specific ways you have to administer those tests on the roadside and often if officers aren’t doing it open, they forget what all the steps are and what the instructions are and how to even grade them,” Grant said. “If you’re not doing it every day, it’s easy to forget.”

Grant said the numbers reveal that drunken driving doesn’t rank as a high priority for the chief or his department.

“I think that it might take a really tragic incident in Dallas before DWI enforcement becomes a priority for DPD again, and that's unfortunate,” she said. “Certainly no one that does what I do for a living thinks we need to have more drunk drivers on the road.”

Last year, 15 men and women died in Dallas in drunken driving accidents. Tell it to them and their families that drunk driving enforcement isn't a priority.