A former student said she and Tyson would have sex in his car and he would "flirt with her during class and talk about sex a lot." She was 14 at the time. 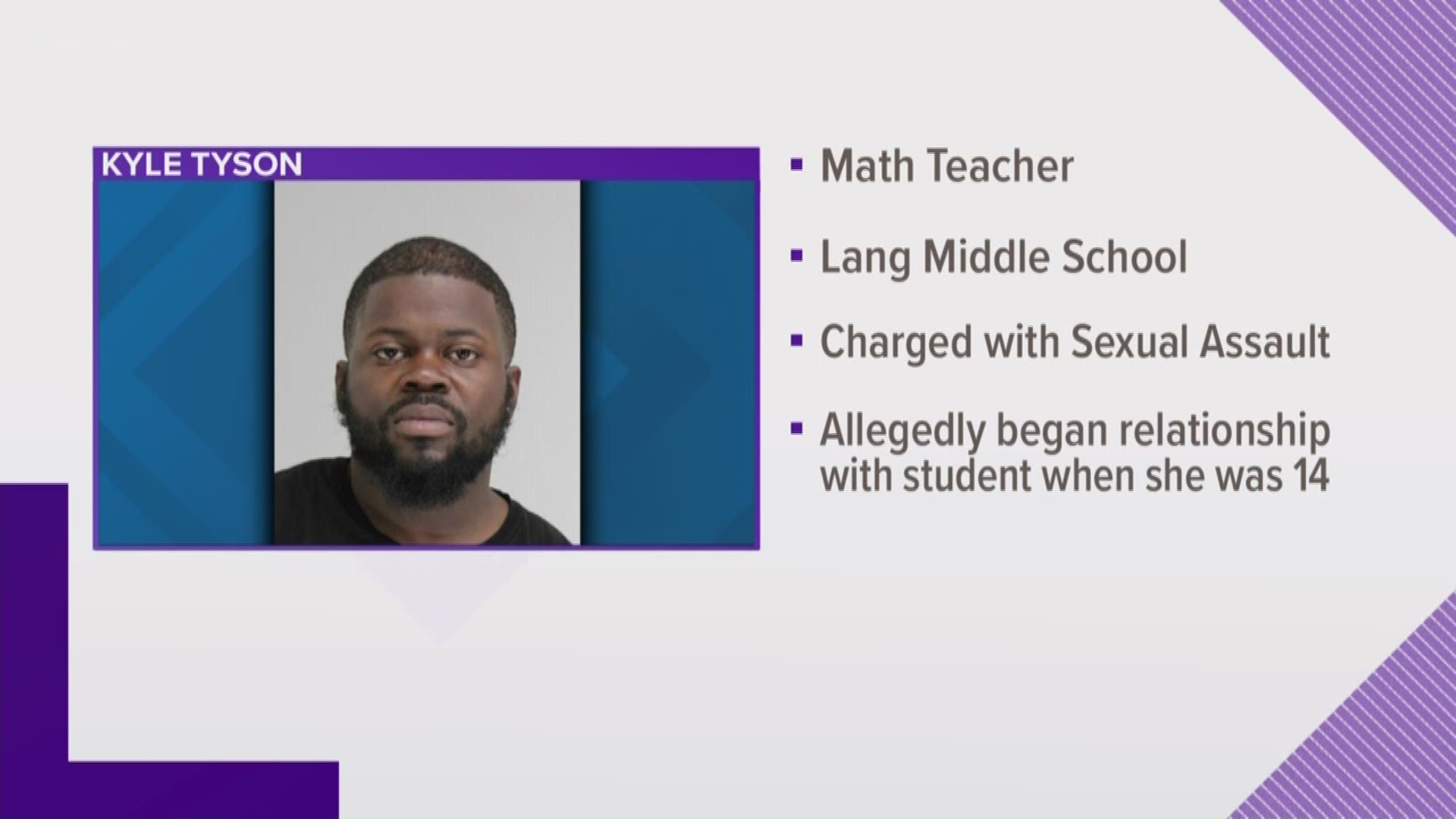 DALLAS -- A math teacher for a Dallas middle school has been placed on administrative leave after a student revealed she had an improper relationship with him starting at the age of 14.

Kyle Tyson, 31, a math teacher at Lang Middle School, has been charged with sexual assault and improper relationship between educator and student, an arrest warrant reveals. The alleged events took place between December 2016 and January 2017.

On May 7 of this year, the victim's mother learned of her daughter's relationship with Tyson. Her daughter admitted it was true and said she and Tyson would have sex in his car and he would "flirt with her during class and talk about sex a lot," the warrant states.

Child Protective Services and Dallas police were notified and began an investigation.

The victim told officials during an interview that she was 14 years old and in 8th grade when she was in Tyson's math class for first period. She said starting in November and December 2016, Tyson began "saying sexual things to her" while they were in class.

He also "put his hands underneath her clothing and touched her breasts" while she was in his classroom between periods, the victim said. He also showed her pictures of his privates and asked her to touch him over his clothes, the warrant reveals.

She said the suspect told her they needed to make this "a once a month thing," and told her not to say anything because he "wanted her and no one else needed to know," the warrant states.

On Dec. 23, Tyson allegedly suggested on Facebook that the two of them get food and the victim told him no, the warrant states.

Soon the victim left Lang Middle School and was in the 9th grade. She said the suspect sent her a text message and she told him she had a "new friend" who was male. The suspect told her "she only needed to be talking to him and that he was mad about her" and the new friend, the warrant states.

The victim told police that in January 2017, the suspect texted her again and learned she had moved near him in Oak Cliff. He asked her if she wanted to get food, and she told him she didn't want to do anything sexual with him.

The victim told police that Tyson brought her food on three different occasions, but they would just sit in his car and talk while eating, the warrant states.

Tyson was arrested and charged with sexual assault and improper relationship with a student. He paid his bond of $100,000 and was released.

Robyn Harris with Dallas ISD said Tyson has been placed on administrative leave. He was hired in November 2013.