North Memorial Health says one victim was discharged Tuesday afternoon, while three others are in critical, but stable, condition. 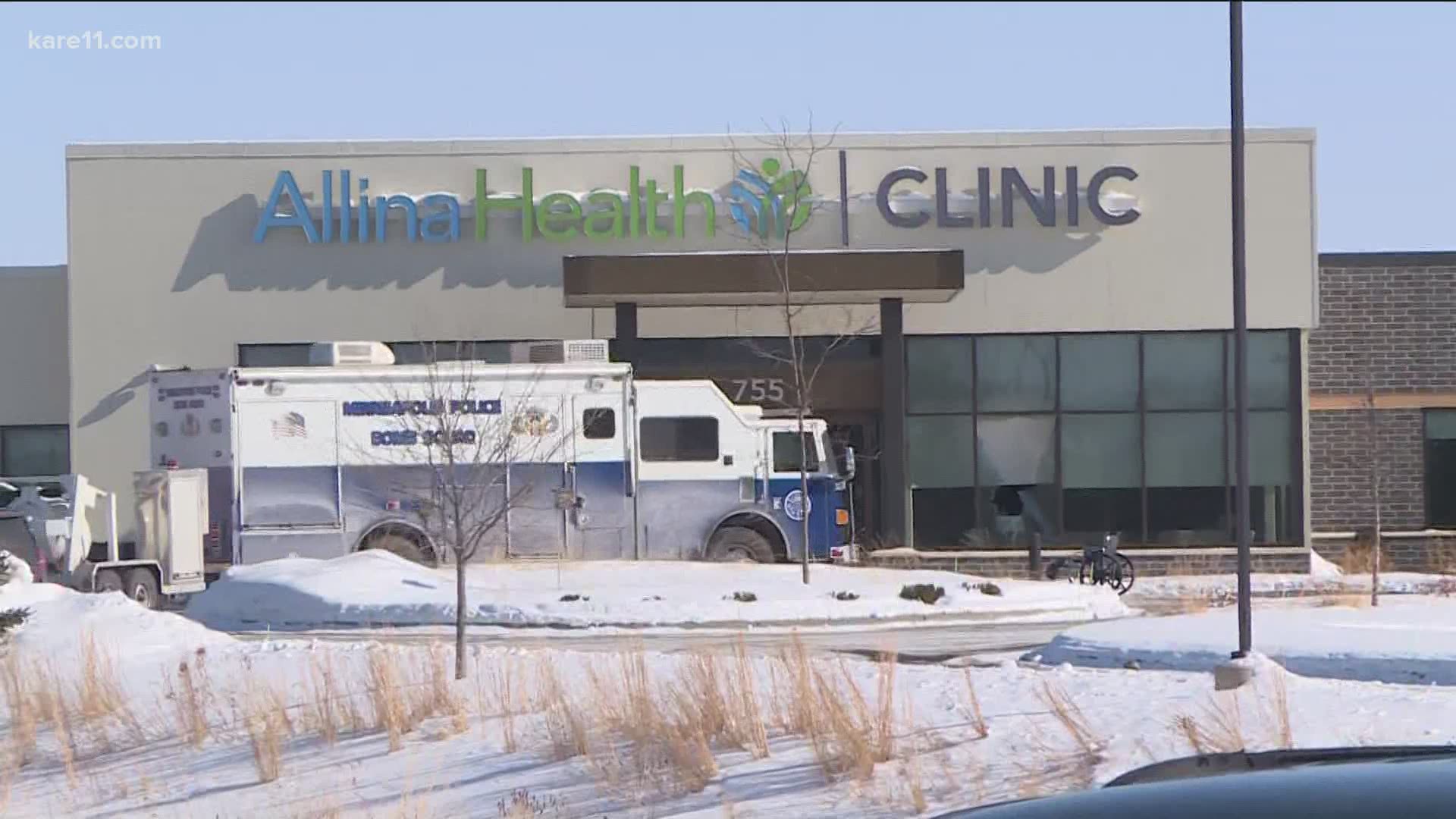 BUFFALO, Minn. — A spokesperson with Hennepin Healthcare confirmed that one of the people injured in Tuesday's shooting at a health clinic in Buffalo has died. The victim, who has not yet been identified, was transported to HCMC where they later died.

North Memorial Health said four of the Buffalo shooting victims were taken to North Memorial Hospital. A hospital spokesperson said one of the victims had been discharged by Tuesday afternoon, while three others are in critical, but stable, condition.

Buffalo Police Chief Pat Budke fought back tears as he gave more details about the shooting at a 2 p.m. news conference. He said initial information shows that the clinic may have been targeted specifically, and that the shooting was an "isolated" incident.

Officers who arrived on scene located multiple victims and the suspect, who was taken into custody. Wright County Sheriff Sean Deringer identified the suspect as Gregory Paul Ulrich, a 67-year-old man from Buffalo.

Buffalo Hospital president Kelly Spratt confirmed at the news conference that five people were hospitalized. Four went to North Memorial, and one went to HCMC. Spratt said two people were first brought to Buffalo Hospital, but the other three left for metro hospitals directly from the scene due to the level of injury.

Budke said Ulrich has had contact with the health care community in Buffalo and has lived there for a long time.

"It's a history that spans several years and there certainly is a history of him being unhappy with the health care that he received," Budke said.

Wright County Sheriff Sean Deringer said that Ulrich is "no stranger to law enforcement" and has been involved in multiple calls for service.

BCA special agents and crime scene personnel are en route to assist the Buffalo Police Dept. in the investigation of a shooting incident involving multiple victims.

"There is no information at this time that leads us to believe that there is any nexus with domestic terrorism," Budke added. "We are very familiar with the suspect."

Deringer said that when his deputies responded to the clinic, "It was a horrible-looking scene."

During a secondary search after evacuation, the sheriff said a suspicious package was found in the lobby and the Minneapolis Bomb Squad is currently investigating.

Deringer said after responding to the clinic, they received information that Ulrich was staying at the Super 8 Motel nearby and "out of an abundance of caution" they sent crews over there. He said explosive devices were found there as well, but everyone was safely evacuated.

Deringer said they believe Ulrich acted alone and so there is no search for other suspects and "time is on our side" with the investigation.

RELATED: What we know about the man arrested in the Buffalo clinic shooting

Buffalo Mayor Teri Lachermeier called on the community to come together and support one another.

"This doesn't happen in Buffalo, Minnesota, right?" she said. "Reach out, check on people, make sure they're OK."

A woman named Kathy who had just entered the clinic before the shooting started described what happened to KRWC Radio Sport Director Jamie Broman. She said she had just checked in and was walking to take a seat when she heard a man say "get down on the ground." Kathy said she turned, saw he had a gun, and then "there was screaming and there was shooting."

Kathy went to hide in the clinic's coffee nook, and said she then heard more shooting from the back of the clinic. "I didn't know what to do," she said tearfully, fighting for words.

She described Ulrich as an older man with gray hair. "I can see his face," she recalled. Kathy called 911 shortly before the man returned to the front of the building, and called authorities himself. "I heard him say 'I'm gonna call 911,'  and then he himself called 911. He said 'there was a shooting, you better send lots of ambulances.'"

"I've never, just never experienced anything like this in my life."

At a COVID-related news conference Tuesday, Gov. Tim Walz addressed what he called the “tragic situation” in Buffalo.

“At this time what we know is that it was an active shooter situation and some improvised explosive devices,” he said.

Walz said he’s spoken with the Department of Public Safety and was told they have a suspect in custody. “At this time it appears that it was a single individual,” he said. “Too early to tell motives or reasons why.”

Walz thanked Buffalo Police, the Wright County Sheriff’s Office and other responding authorities and said “our thoughts and prayers and of course our support” are with them. He said there was also “some early interaction” with FBI and ATF due to the presence of explosives.

Police dispatch audio initially reported 15 shots fired, and later shared an audio clip of an officer reporting as many as five critically wounded. Dispatchers were heard on Broadcastify stating that a male said he had four "homemade explosives" that all went off.

Images from Sky 11 appeared to show some of the windows at the clinic shattered or blown out.

Audio from Broadcastify also indicated that a Super 8 Motel a relatively short distance from the clinic was evacuated, and radio traffic mentioned that "room 110" may have been where the suspect was staying. Dispatchers say suitcases were still inside that room when the building was searched.

Credit: KARE
Law enforcement were present at the Super 8 Motel in Buffalo, which appears to be a secondary scene. Audio from Broadcastify suggests the suspect in custody may have been staying there.

Federal authorities confirmed via Twitter that agents from the Bureau of Alcohol, Tobacco and Firearms were en route to the scene, responding to reports of an "active shooter situation." The State Patrol reported that the department's pilots were flying six boxes of blood from the Red Cross to Buffalo Hospital to be ready for victims of the shooting.

The Buffalo-Hanover-Montrose public schools, with several buildings in the vicinity of the clinic, sent a message home to parents explaining what had unfolded.

"Today there was an emergency situation at Allina Crossroads Clinic that prompted schools in Buffalo to be in lock-down and, at the direction of the Buffalo Police Department, we evacuated students from the two closest schools (Tatanka Elementary STEM School and PRIDE Transitions) to Buffalo High School.

All other schools will dismiss today at their regularly scheduled time. All KidKare sites will be open until 6:30 p.m. Tatanka KidKare students will remain at Buffalo High School until picked up by parents.

The district acted quickly with the help of the Buffalo Police Department and Wright County Sheriff's Department to make sure that our students are safe and secure. Our thoughts go out to those directly involved with the situation."

Yesterday, Allina Health joined a tragically long list of organizations who have suffered a workplace shooting. We are devastated. With overwhelming sadness, we can confirm that Lindsay Overbay lost her life to this senseless act of violence. Lindsay was a medical assistant who worked for Allina Health since November of 2018. The loss of Lindsay is traumatic for all who knew and loved her. Our entire Allina Health family extends our deepest sympathies to her family, friends and co-workers. In total, five of our colleagues were victims in the attack. Sherry Curtis, a Licensed Practical Nurse at Allina Health since 2013 was also injured in the attack. We will not be identifying the other victims at this time out of respect for the families’ wishes.

Our primary focus is on supporting our employees, patients and the community of Buffalo. Our response teams have pulled together to provide support to our staff in Buffalo, including resources for the victims and their families, grief counseling and spiritual care for staff. We have also consulted with Allina mental health experts and taken their counsel into account as we continue to do everything we can for our colleagues. Even though this appears to be an isolated incident, we have taken the extra precaution of increasing security in our facilities. We are working closely with law enforcement who are providing additional support to ensure the safety of our teams and patients.

We recognize that law enforcement is working hard on this case. We’re grateful for their support. Out of respect for the on-going legal process, we will not be making any comments related to the investigation surrounding the incidents of Feb. 9, 2021 at this time.