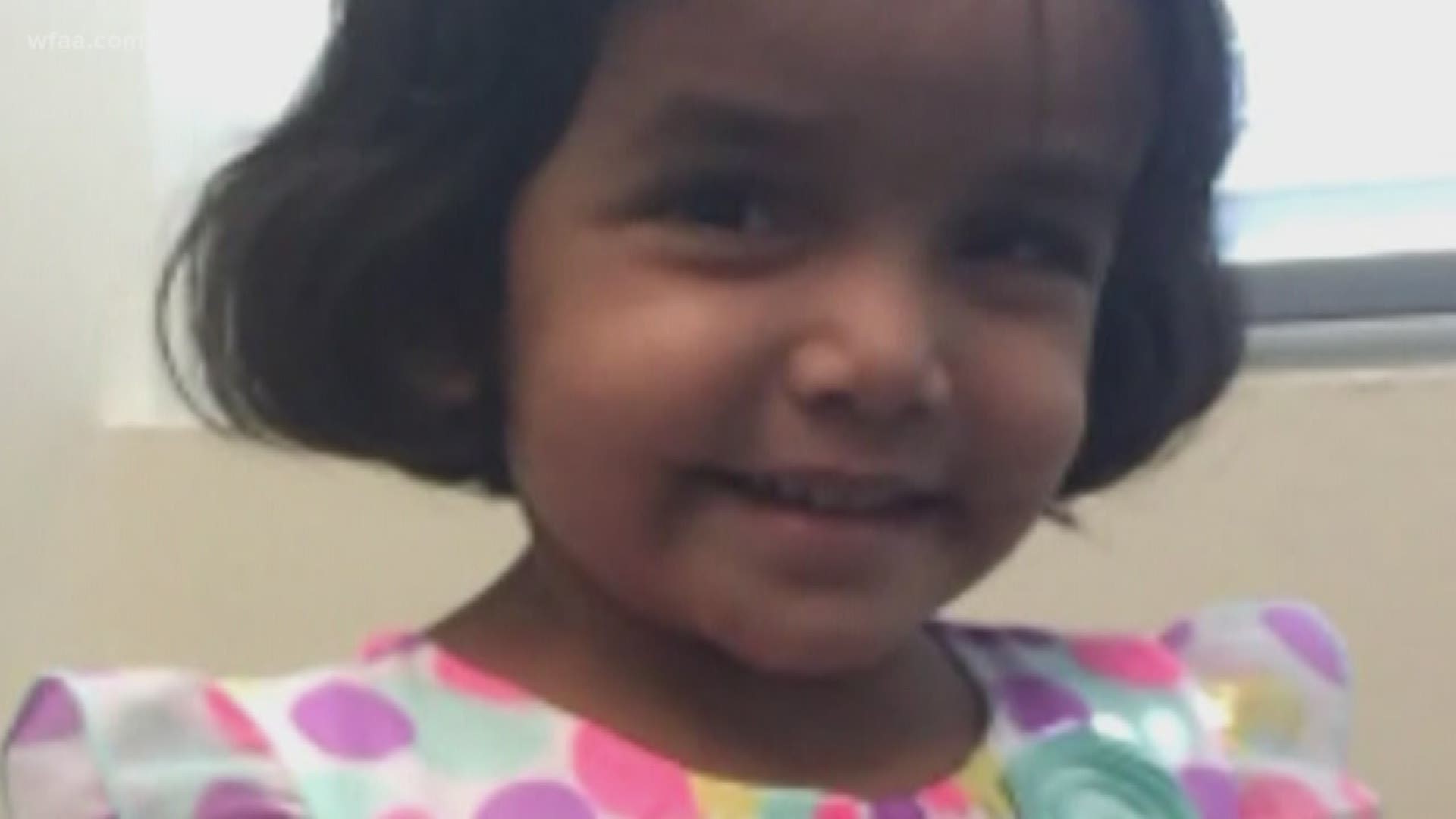 Wesley Mathews has pleaded guilty to a lesser charge of injury to a child by omission. A jury will decide his punishment. He is scheduled to testify in his own trial, which could happen Tuesday.

The capital murder trial for Mathews began Monday and may finally explain what actually happened the night Sherin Mathews died. He pleaded to the lesser charge before the trial even got started.

Now, the state and Mathews' defense attorneys will fight over sentencing the next few days.

Wesley Mathews initially told police his 3-year-old adopted daughter was missing after he put her outside Oct. 7, 2017, because she wouldn’t drink her milk.

His story changed after Sherin’s body was found weeks later in a culvert near the family’s Richardson home.

In court on Monday, the state played never-before-seen body camera footage of officers interacting with Mathews when they first arrived to investigate her disappearance.

In the video, you can see Mathews describing to officers what Sherin was wearing and also where he last saw her.

They also played Mathew's call to police to report that Sherin was missing.

However, prosecutors said the call was made to a non-emergency line.

In the call, Mathews explains that he's been looking for Sherin over the last few hours and sounds very calm.

A special agent with the FBI also testified and said that he examined Mathews' iPhone and found that he stopped sharing his location with his wife Sini after Mathews reportedly was left outside.

A K9 handler also testified and held back tears as she explained finding Sherin in the culvert 15 days after she went missing.

As far as what really happened that night, Mathews' defense attorney told jurors that the 39-year-old will take the stand and testify about how Sherin actually died.

"I would expect him to be contrite, remorseful, and apologetic," Becker said. "It has the potential to be a big moment, depending on what he says, how he says it, and how it comes out."

Sherin was adopted by Wesley and Sini Mathews in the summer of 2016. The child was believed to have special needs and was undernourished.

Prior to her adoption, Sherin was abandoned by her biological parents in Gaya, India, and taken to a local orphanage in Nalanda.

But after the Mathews couple brought the girl to Richardson, they "failed to provide adequate nutrition to Sherin Mathews from Sept. 1, 2016 until the time of her death," court records show.

Prosecutors are expected to present evidence that Sherin’s adopted parents did not take her to a doctor for multiple bone fractures.

The parents knew about Sherin’s injuries yet neglected to seek proper medical care.

A doctor is expected to testify during the sentencing that Wesley Mathews did not seek medical treatment for a week for Sherin’s broken bones in February 2017.

The parents told the doctor Sherin broke her arm during a fall from a couch, court records show.

Fractures to the girl’s shoulders were consistent with yanking or pulling and not with an accidental fall, prosecutors have said during pre-trial hearings.

Doctors also discovered other fractures on Sherin, including to her tibia and femur. Those injuries had not been reported to doctors by the parents.

Court records show the parents missed a scheduled appointment for Sherin in February 2017 at the Failure to Thrive Clinic at Children's Medical Center Dallas.

The night of Sherin's death, the family left her home alone to go out to dinner.

RELATED: Adoption agency on Sherin Mathews: 'The child had no problems'

A criminal child endangerment case against Sherin’s mother, Sini Mathews, was dismissed in March after the Dallas County District Attorney said there was not enough evidence to prosecute.

After the criminal case was dismissed, Sini Mathews said she was looking forward to being reunited with her biological daughter.

Sini may testify this week and was seen in court on Monday supporting her husband.

The couple gave up parental rights to their biological child in January 2018. The girl was removed from the family's home Oct. 9, 2017, after Sherin went missing.

She remained in foster care for weeks before she was sent to live with Sini Mathews' relatives in the Houston area.

Wesley Mathews has been placed on special watch in jail for suicide prevention, jail officials have said.