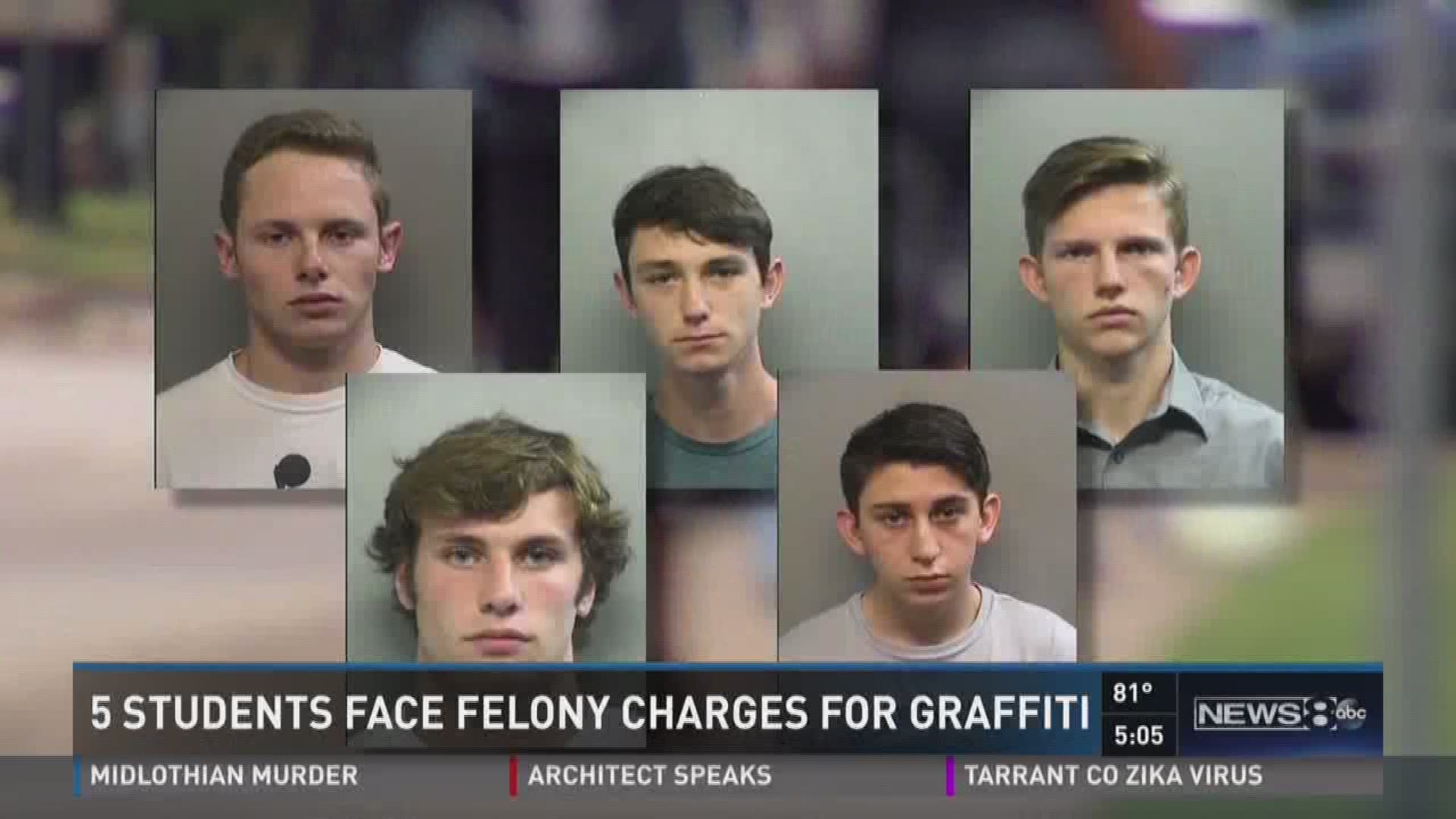 Christian Joeckel, Ryan Westbrook, Hayden Honolka, Cameron Bodenstab, and Ethan Sigmond were arrested after an investigation into racist, vulgar and anti-transgender graffiti was conducted on the school’s athletic facilities and restrooms. Joekel, Westbrook, and Honolka are all 17 years old; Bodenstab and Sigmond are 18.

All are students at Arlington High, a rival school.

According to arrest warrant affidavits, the graffiti included the phrase “whites only” spray painted above a water fountain and “trans only” defacing a men’s bathroom door.

In 2016, this is happening. We hope that @ArlingtonISD investigates & enforces policies soon. @NAACP @CornellWBrooks pic.twitter.com/FSxjvhU4ht

Vulgar language not appropriate for publication was painted on athletics banners and trash cans near the football stadium, according to an affidavit.

Thursday morning, police were called to Arlington High School after Bodenstab confessed to the graffiti. He said he had brought a can of green spray paint -- Arlington High's primary color -- and went to James Martin High with his friends with the intention of painting the jungle gym area.

Westbrook said the vandalism was part of a “senior prank,” according to an affidavit. He admitted to defacing a jungle gym with several markings, including the words “payback for the parking lot” and “muck f*** fartin martin.”

“Anytime you have hateful messages, [it's] very concerning," Cook said. "We're going to look at that to know who did this [and] what is the motivation?”

Joeckel admitted to police that he had spray painted a penis, wrote "whites only" and "trans only."

Bodenstab and Sigmond both admitted to painting the jungle gym at the school green, but said they did not paint any of the other graffiti at the school.

The teens are charged with state felonies for causing an estimated $20,000 in damage to school property. The graffiti may also bring them hate crime charges.

“The hate crime statute will be presented to a grand jury,” Lieutenant Cook said. “Since they’re felonies, there will have to be a hearing for indictment.”

The case will be turned over to the Tarrant County district attorney.

Outside Arlington High School Friday, students said there’s some talk in school, along with some surprise.

Senior Ahlthalia Crowder says she knows two of the suspects.

“They’re really good students,” she said. “One is always helpful with student council.”

“A prank? Yes. Nothing to hurt someone intentionally,” said student Rasnaye Mitchell.

But she said actions have consequences. She said the suspects she knows are smart, good kids who were probably paying Martin back for painting Arlington’s parking lot last year after seniors had decorated it.

But a representative for Fairness Fort Worth, an LGBTQ resource, says it should be prosecuted as a hate crime, which would increase punishment.

As charged, the students could face several months in county jail if convicted.

Alissa Simmons, president of Arlington’s NAACP chapter, said she too is very concerned. She wants the school district to treat it seriously.