Dr. Randall Wade, dressed in a striped jail jumpsuit, looked like an old and frail man as he sat in federal court Thursday in Sherman. 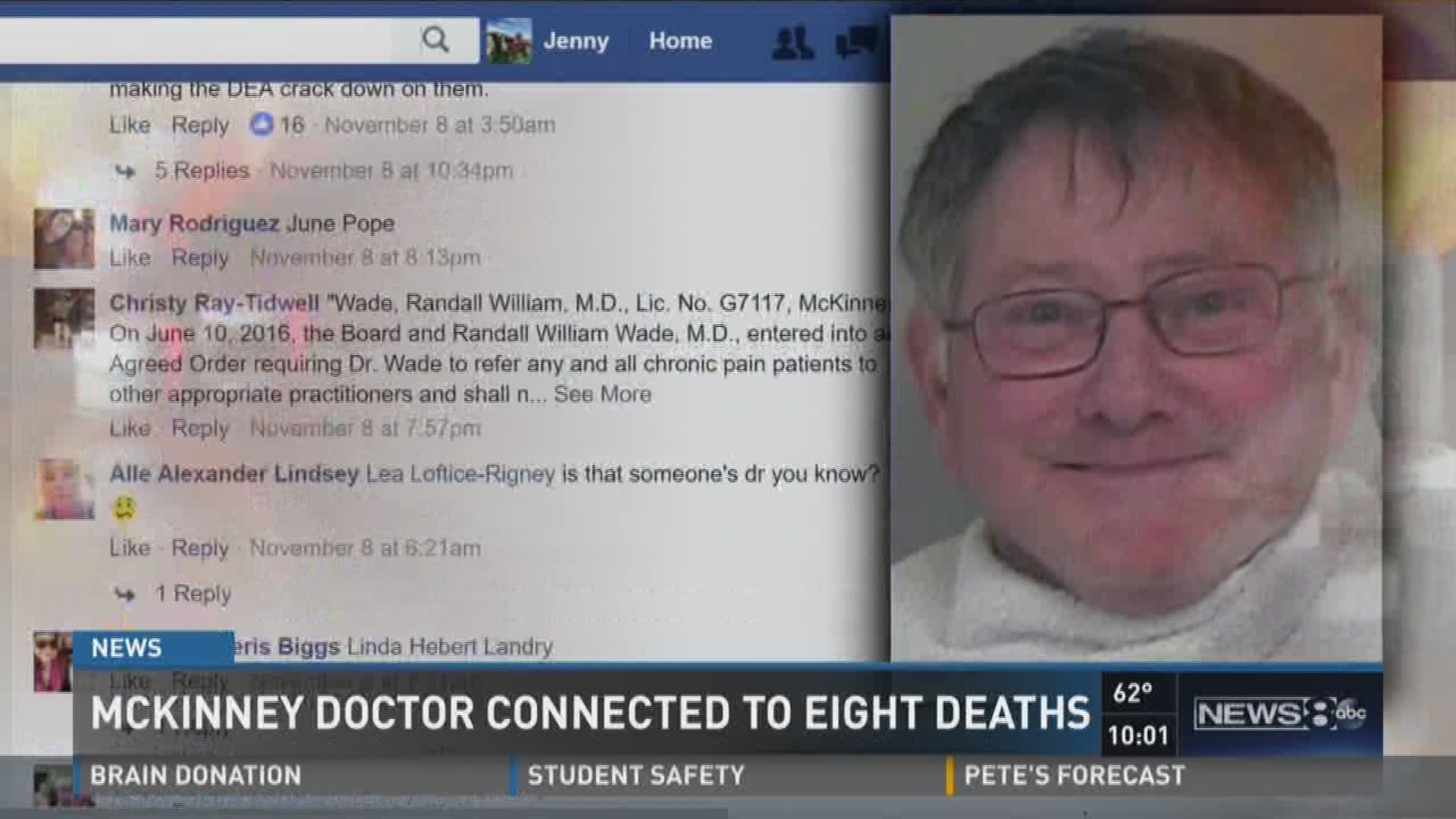 MCKINNEY -- Dressed in a striped jail jumpsuit, Dr. Randall Wade looked like an old and frail man as he sat in federal court Thursday in Sherman.

The doctor, accused of prescribing massive amounts of controlled substances to patients that didn't need them, was shackled by his hands and feet. He wore orange slippers.

At one point, he turned around and smiled at his wife and other family members. U.S. Marshals ordered him to face forward.

His attorney, Brady Wyatt, was there asking U.S. Magistrate Judge Christine Nowak to release Wade pending trial. He’d been in jail since his arrest in mid-October. Nowak had already denied a prior request.

In a surprise move, Wyatt told the judge that a letter had been sent that day to the Texas Medical Board surrendering his medical license. He also agreed to relinquish his federal license to prescribe controlled substances.

“He’s going to follow exactly what you tell him to do,” Wyatt said. “He’s not going to be practicing medicine at all.”

It comes too late for the family of Lowell Haynes.

Wade was Lowell’s family physician. The indictment specifically blames him for Lowell’s April 2015 death. He was 54.

Lowell's family filed a wrongful death lawsuit against Wade Thursday.
An autopsy found that Lowell died from an overdose of hydrocodone and alprazolam, better known as Xanax.

Lowell was in a car accident and was prescribed painkillers. Then he got addicted to the drugs. His family says he started going to Wade because word had gotten around about Wade’s willingness to prescribe narcotics.

Barbara felt helpless as son’s condition deteriorated. About a year before he died, Barbara says he overdosed and ended up in the hospital. Still, his family says Wade kept prescribing him narcotics.

“It’s like he just didn’t care,” said Barbara, his ailing mother who uses a tube for oxygen and walker to get around. “Just write that prescription and send them on.”

Lowell was a country boy. He loved country music. He’d been like a second father to his nieces, Rachel and her sister, Tiffany.

“Wayne was a fun, happy person,” Rachel said. “He never really was negative until he started taking these drugs. You could tell when he didn’t have it.”

On April 3, 2015, Lowell picked up a prescription at a pharmacy for a massive amount of hydrocodone and alprazolam, better known as Xanax. The drugs had been prescribed by Wade. He would die the next day.

Barbara and Rachel found Lowell just inside the front door of the family home in Princeton. He was on his knees. His feet were crossed and his hands were resting on his head. It looked as if he was praying.

“I touched his back and he was ice cold and I looked at him and he was blue,” Rachel said.
It was too late to get help.

While people were dying, Collin County pharmacies were well aware of Wade.

Amy Driscoll Raulston worked at chain pharmacies in that area for years as a pharmacy tech. Raulston posted on our Facebook page after the first story on aired Monday.

Raulston says Wade’s patients would routinely come in with prescriptions for large quantities of high-powered narcotics and often they wanted refills done sooner than prescribed. It raised eyebrows and prompted them to question Wade’s office.

“You'd always have to deal with his nurses and she'd say, ‘No, Dr. Wade says fill this,” Raulston said. “Every once in a while a pharmacist would get to talk to him and it was usually a pretty heated discussion. He knew what he was doing was wrong. He just did not care.”

After a while, chain pharmacies balked at filling his prescriptions.

“It was common knowledge you don't fill stuff for Dr. Wade,” Raulston said.

Raulston says pharmacies were sounding the alarm. The ones she worked would routinely send reports to the Texas Department of Public Safety about Wade. Nothing seemed to come of it.

Raulston says something should have been done much sooner to shut Wade down.

In court Thursday, DEA Agent Susannah Herkert testified that Wade was the No. 1 prescriber of hydrocodone in Collin County in 2015.

She also the agency is now looking at two patient deaths that came to light after News 8’s first story in addition to the original six.

One of them was a Gainesville woman who died of an opiate-related overdose in March 2016. Patient files showed the woman had been prescribed large amounts of hydrocodone and alprazolam in the four months preceding her death. The woman last saw Wade about one month before she died.

The family of another man who died told the DEA that the man had forged a prescription in Dr. Wade’s name. The family said that when Dr. Wade found out about it, Wade continued to write him prescriptions.

One of Wade’s patients took the stand in his defense.

Barbara Chapman testified that she and her husband had been a patient of his since the early 1990's. She was called as a character witness.

She testified that he had never prescribed her pain pills nor had she asked him for them. Chapman said she did not believe that he would do the things that he had been accused of doing.

“I would recommend him to my children,” Chapman said. “I have faith in him.”

None of it swayed the judge. She ordered that he remain in custody, prompting a tearful outburst from Wade’s wife. She declined to comment after the hearing, but his daughter defended him.

It’s been a year and half and Lowell still doesn’t have a headstone on his grave. The family never heard from Wade after Lowell died.

“He took a part of our lives that can’t be replaced, someone who meant more to us than it did him,” Barbara said. “He didn’t think it would ever fall back on him, but he’s gonna find out that it is going to fall back on him.”