A Dallas County grand jury has handed down a true bill of indictment against former Cleveland Browns quarterback Johnny Manziel, a source in the district attorney's office told News 8. 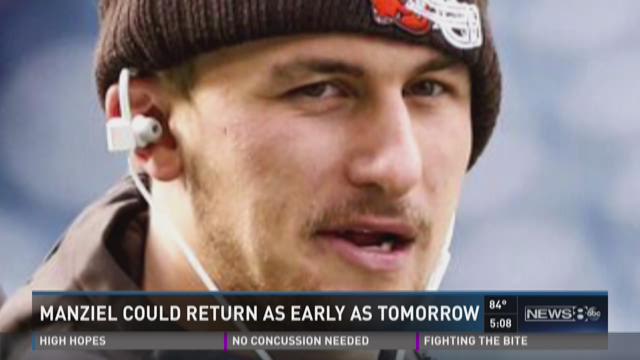 A Dallas County grand jury has handed down a true bill of indictment against former Cleveland Browns quarterback Johnny Manziel, a source in the district attorney's office told News 8.

The indictment, on a misdemeanor assault charge, was formally announced on Tuesday.

Manziel's bond was set at $1,500, typical for a Class A misdemeanor. He will now have to turn himself in to authorities.

Bond has been set for Johnny Manziel at $1,500. Bond conditions no contact with victim and no guns. He will have to now turn himself in.

“The Grand Jury’s review of Mr. Manziel’s case has resulted in a “true bill”, which means that there was probable cause found that Mr. Manziel committed a Family Violence Assault against the complainant," District Attorney Susan Hawk said in statement. "Therefore, this case will move forward in the criminal justice system and be prosecuted by the District Attorney’s Office. As always, we respect the criminal justice process and the decision that the Dallas County Grand Jury has made in regards to this case.”

Hinton says Manziel wants to "tackle this and get it over with." Hinton also says he plans to fight to get the case dismissed.

Manziel’s family violence case was heard by a grand jury last Thursday. He is accused of assaulting his ex-girlfriend, Colleen Crowley, in Dallas in late January.

She claimed Manziel hit her so hard he burst her eardrum. Part of the alleged assault happened at Hotel ZaZa in Uptown Dallas, where the two had been together the night of Jan. 29.

Typically, the grand jury hears only felony cases, but the Dallas Police Department wanted Manziel’s case to be heard by a grand jury to see if there was enough evidence to indict and arrest the embattled former Heisman Trophy winner.

The grand jury that reviewed the evidence in Manziel’s case had just been sworn in.

A protective order was signed at the beginning of February that prevents Manziel from seeing Crowley for two years. Court documents state he must stay at least 500 feet away from his ex-girlfriend’s home and place of work.

Manziel hasn’t avoided headlines since the assault allegations surface. He has been dropped by two agents in two months, and was accused of causing over $30,000 in damage at a Los Angeles home during a party earlier this month.