Violence on the Fourth: At least 23 people shot across Fort Worth and Dallas during holiday

At least five people have died, according to police. 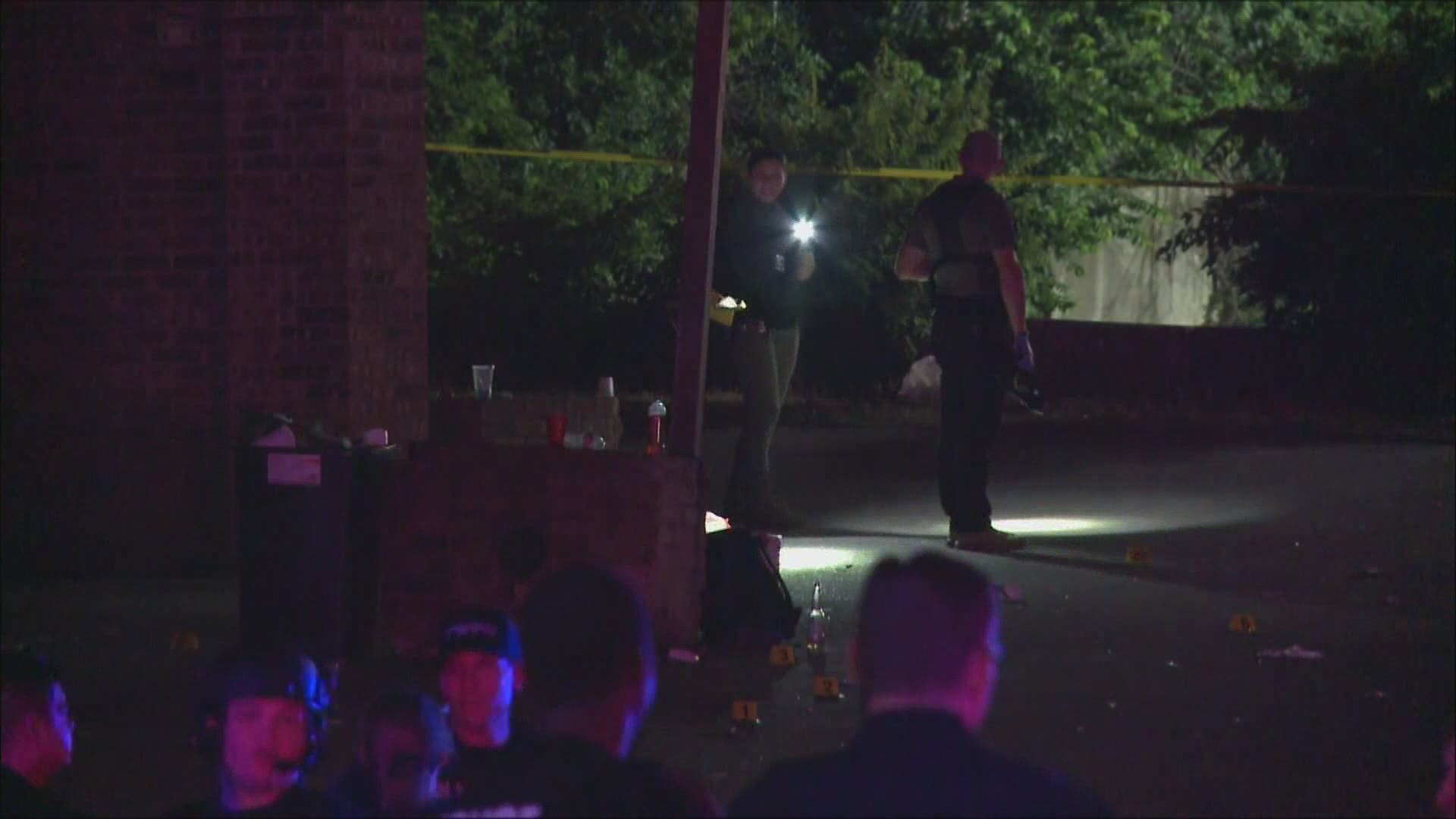 This story will be continuously updated Monday as police release additional information.

Violence erupted in Dallas and Fort Worth during the Fourth of July holiday, leaving at least 23 people shot. Five of those people have died from the gunfire so far.

The shootings started almost immediately after the clock hit midnight, according to police, with the first happening in Dallas at 12:30 a.m. The violence continued through the night into Monday.

Dallas officers responded to a shooting call on Sunday after two people got into an argument that escalated, officials said.

Officers said when they arrived, they found someone in the courtyard at the location "causing a disturbance." The alleged shooter approached this person and the two of them had an argument, police said.

The suspect had someone get them a handgun, which the suspect used to shoot the person they were arguing with multiple times, according to police. The suspect then ran from the scene.

The victim was taken to a local hospital in critical condition, police said.

Officials have not yet provided any details about the suspect.

'This is an extremely tragic event' | 8 in hospital after overnight shooting in Fort Worth, police say

An officer heard gunshots around 1:30 a.m. Sunday near the 3400 block of Horne Street. When police responded to the area west of Lake Como Park, they found eight people with gunshot wounds near a carwash, according to officials.

A juvenile girl was also injured when she was hit by a car that was trying to drive away from the scene as the shooting started, police said. Her injuries are considered minor.

RELATED: 'It's not us': Fort Worth's Como community pushes back against weekend violence

Officers who arrived on the scene provided life-saving measures to the victims, according to officials. All are currently in stable condition, police said later Sunday.

Police still don't know the reason people were gathered in the area at the time, according to Fort Worth Police Chief Neil Noakes.

"This is an extremely tragic event on what is supposed to be a festive occasion on Independence Day," Noakes said.

No suspects are currently in custody.

RELATED: 'This is an extremely tragic event' | 8 in hospital after overnight shooting in Fort Worth, police say

The shooting happened shortly before 8 p.m. on the 2900 block of Gould Street.

Officials said Ronnie Berry was in the street when he shot multiple times during a disturbance. First responders took him to a local hospital for treatment, but he died from his injuries.

RELATED: 61-year-old man killed over a poker game is one of 3 people killed in Dallas-area shootings over holiday weekend

Crime Stoppers is also offering up to $5,000 to tipsters who provide information that leads to an arrest and indictment in the case. To leave a tip, call 214-373-8477 at anytime.

One person was killed and two others wounded when a domestic argument escalated into a shooting Sunday night in Fort Worth, according to police.

The shooting happened around 8 p.m. on the 3300 block of Galemeadow Drive.

Officials said an argument between two family units, both current and former, led to the gunfire. First responders took the three victims to a local hospital, where one man was pronounced dead.

Homicide detectives are continuing to investigate.

Two boys were shot Sunday night as they were out walking, according to Dallas police.

The shooting happened shortly before 10 p.m. on the 2800 block of Casey Street.

Police say as the boys, one 12 years old, the other a 14-year-old, were shot at while they were walking through a vacant lot. A man had fired the shots at them, the boys told police, but fled before officers arrived.

Both boys are expected to survive their injuries and are being treated at a local hospital.

Five men were shot, three fatally, during an annual block party near Hamilton Park in North Dallas on Sunday.

The party had gone into the night, and there was gunfire just as it was wrapping up around 11:15 p.m. The victims - identified by police as 22-year-old Alvin Ray Murray II, 19-year-old Hassan Blazer, and 17-year-old Mi’quarius Alexander - were hit near the intersection of Towns Street and Bellafonte Drive, police at the scene told WFAA.

Three of those shot died, while another person was left in critical condition. The condition of the fifth person was unclear as of Monday morning.

Police say they have not identified any suspects in the shooting and say it remains under investigation.

Anyone with any information about the incident is asked to contact Det. Theodore Gross at 214-671-3143 or theodore.gross@dallascityhall.com and to refer to case No. 118641-2021.

Police: 2 shot while driving through Fort Worth

Two people were hurt when someone shot at their car Sunday night while they were driving in Fort Worth, police said.

Officers responded around 11:15 p.m. to the 5900 block of Village Course Circle after they got the shooting call.

A group of five people were in a vehicle driving near Ramey Avenue on the east side of Fort Worth when someone started shooting at them, according to police.

Two of the five people were hit by the gunfire, though police said they are expected to survive their injuries. Both were taken by first responders to a local hospital for treatment.

Police say the shooter is not yet in custody.

A man was shot in the leg overnight Monday while at a party in Fort Worth, police said.

Several people at a party had gotten into a fight when it turned violent as one person pulled out a gun and started shooting, according to police. The victim was shot in the leg and was stable as first responders took him to a local hospital for treatment.

Police say the four suspects in the incident had fled before officers arrived, but two of them later returned while officials were still at the scene. One of them was taken to a local hospital for minor injuries from a prior altercation while the other was questioned by detectives.

Police say the other two suspects in the case remain outstanding.