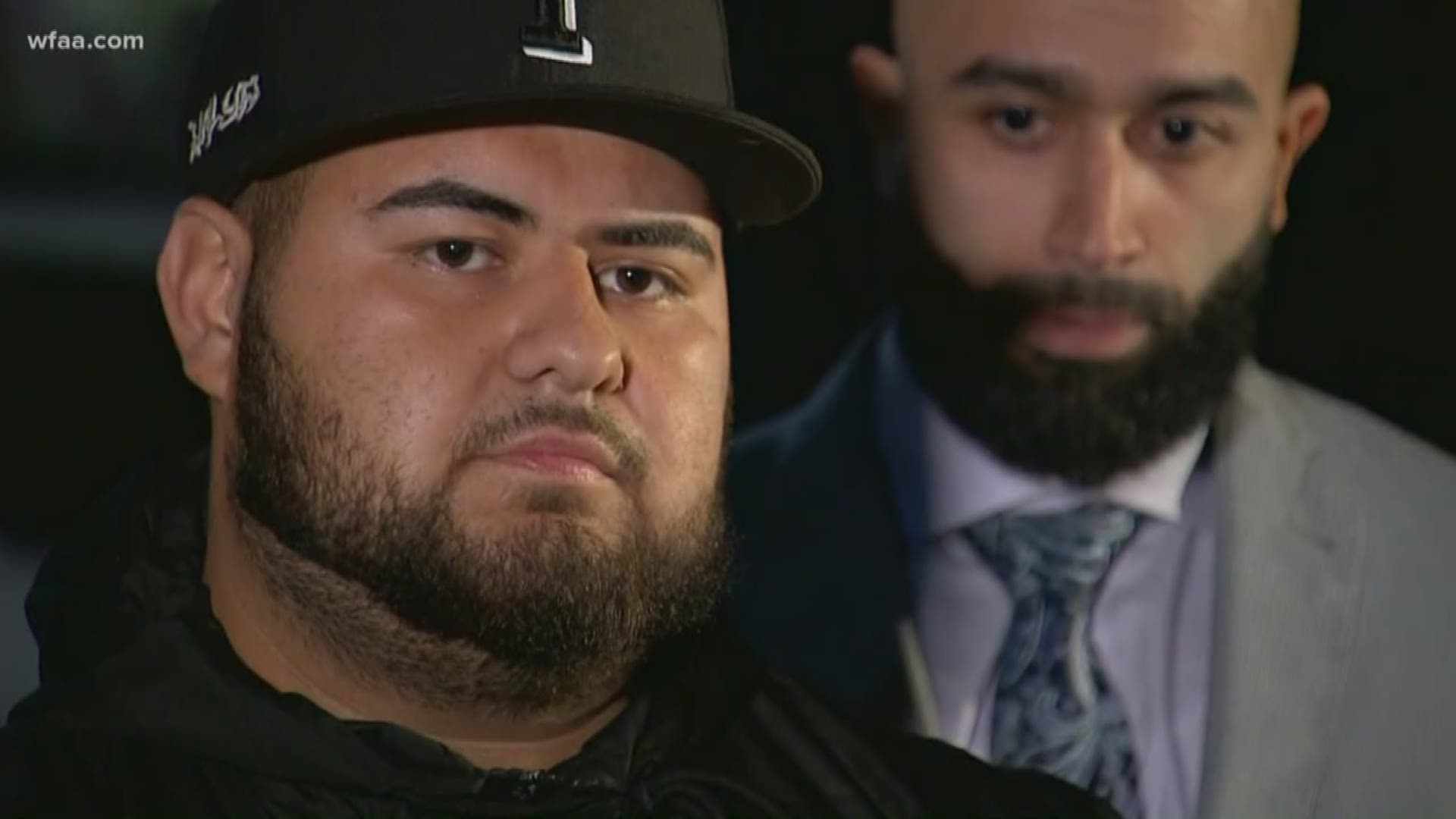 A man accused of killing two people and injuring 12 others at a party in Greenville was released from jail after the Hunt County Sheriff's Office recommended the capital murder case against him be dropped.

Brandon Gonzales was arrested on a capital murder charge Oct. 28, less than 48 hours after the shooting that left two dead and 12 injured at The Party Venue.

Kevin Berry Jr., 23, and 23-year-old Byron Craven Jr. were killed at the Halloween party in Greenville.

The sheriff's office said in a news release Tuesday that "due to the lack of cooperation from witnesses and discovery of exculpatory evidence during the course of the investigation, we have requested the Hunt County District Attorney’s Office take no action on Mr. Gonzales’ case at this time."

Brandon Gonzales’s brother, Gabriel Gonzales, was unaware his brother was being released from custody until WFAA reached him by phone.

“That’s what we’ve been saying!” Gabriel said to loud cheers from the people he was with.

Gonzales stayed at the Hunt County jail after he was released Tuesday evening to discuss what he would do next.

The father of three young children stood next to two lawyers who told members of the media that they plan to file a civil suit against the sheriff's office.

"We do plan on holding the sheriff's office accountable for this civilly," attorney Andrew Wilkerson said.

"This is a shoddy investigation and they rushed to judgment when naming Brandon, an innocent man, a suspect in this case," attorney Michael Campbell said.

Gonzales shared hugs with family members and told WFAA that he didn't learn of his release from the sheriff personally, only from a county deputy inside the jail who told him to gather his things.

"I was about to go to sleep, and then a guard came in and told me to get all my things," Gonzales said. "I was like, 'I'm going home?'"

Gonzales said he is owed more than an apology from the sheriff's office, adding that his mugshot went all over the nation in connection to the case.

He also said his livelihood and ability to provide for his family was placed in jeopardy.

“Ultimately this case illustrates the incompetence of law enforcement in Hunt County,” Hood said Tuesday night. “The spirit of justice has arrived and Brandon Gonzales is now free.”

Gonzales said he was at the party and was dressed as a security guard, but that he wasn't the shooter. He said he was innocent during an exclusive jailhouse interview with WFAA on Oct. 28.

Gonzales said he was not inside The Party Venue when a shooter opened fire, killing two people and injuring 12 others.

He said when the shooting began, he was in a car outside the venue and claims he has witnesses who can corroborate his story. Gonzales wouldn't reveal the names of those alleged witnesses to WFAA.

Gonzales was arrested at his job at an auto dealership the day after the shooting.

At Gonzales' first court appearance on Oct. 30, Sgt. Jeff Haines of the Hunt County Sheriff’s Office said officials were “100 percent, without a doubt" certain that Gonzales was the shooter.

“We’re confident in the investigation that was conducted by our investigators, Texas Rangers, and the Department of Public Safety criminal investigation division. And we believe that we have the right person,” he said.

An arrest affidavit said that the sheriff's office relied on a single witness to pin Gonzales to the crime.

On Wednesday, Gonzales said he was focusing on getting things back in order. He said he has been given his job back, and is planning to return to work next week.

Read the full statement from the Hunt County Sherriff's Office below:

The Hunt County Sheriff’s Office is currently investigating the shooting that occurred on October 27, 2019 at the Party Venue on U.S. Highway 380. On October 28. 2019, Brandon Gonzales was arrested in connection to the shooting. The probable cause arrest was based on credible information and statements given to law enforcement. Law enforcement has diligently investigated this case and in the days since the arrest, additional information has come to light. Due to the lack of cooperation from witnesses and discovery of exculpatory evidence during the course of the investigation, we have requested the Hunt County District Attorney’s Office take no action on Mr. Gonzales’ case at this time, and that he be released from custody.

We will continue our investigative efforts into the shooting. We know there are many people who were present at the Party Venue on Sunday, October 27, 2019 who have not spoken with law enforcement.  Though individuals may have reasons for not wishing to come forward, we ask that they do so and tell law enforcement what you saw and heard that night no matter how small the information may be. They may not know the importance of any information they have.

If you were present at the Party Venue or have any information regarding this case, please contact the Hunt County Sherriff’s Office at 903-408-6800, or to remain anonymous you may contact Hunt County Crime Stoppers at 903-457-2929.