FORT WORTH -- City officials in Fort Worth spoke publicly Friday for the first time about a viral video causing waves throughout the community. 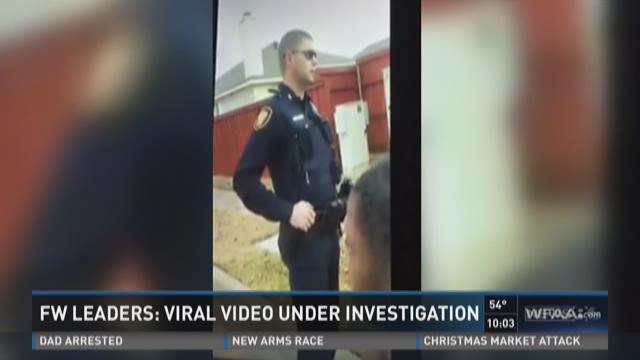 FORT WORTH -- City officials in Fort Worth spoke publicly Friday for the first time about a viral video causing waves throughout the community.

Cell phone video was captured by 19-year-old Brea Hymond after her mother, 46-year-old Jacqueline Craig, called an officer on Dec. 21 to report her 7-year-old son being allegedly choked by a neighbor for what he believed was littering.

The first question from the unidentified officer is, "Why don't you teach your son not to litter?"

Craig tells the officer, "It doesn't matter if he did or didn't. It doesn't give him the right to put his hands on him." The officer answers, "Why not?"

The video shows the argument escalating, eventually leading to Craig and Hymond being arrested. A third person was also taken into custody, but police have not identified them.

During the press conference on Friday, Mayor Betsy Price said the video shows an isolated incident, and Chief Fitzgerald said 99 percent of his officers wouldn't have acted as this officer did.

He also said the alleged assault on a 7-year-old should have been the officer's priority, and that case is still under investigation. Chief Fitzgerald said the officer acted "rude" in the video, but said he can't call it racism yet.

Congressman Marc Veasey said he was disturbed by the video, and that the officer acted "rude and condescending."

“I was outraged by what I saw on the video,” said State Representative Nicole Collier during a news conference on Friday. Elected officials also spoke out on the video and the unidentified officer’s actions.

The group asked the community for calm and promised a thorough investigation.

Chief Fitzgerald said, “For the 99.9% of the police officers that would have handled that case differently, I thank them.”

It has been a rough two-days for Craig and her children. Their lawyers said the family temporarily moved out of their Fort Worth home.

“What they have expressed is exhaustion,” said attorney Lee Merritt. “They say they stayed up all night, with random people knocking on their door.”

Merritt and his law partner Jasmine Crockett say Craig and her children spent Friday speaking with a different Fort Worth detective who has been assigned to investigate the initial assault complaint that had the mom calling police. Lawyers say the meeting was a bit of a struggle for the women, who still have several criminal charges hanging over their heads.

”There was a weird dynamic as we were with the officer,” Crockett explained, “because on one hand, this is the same police department that is currently trying to prosecute her, as well as her daughters. On the other hand, this officer is supposedly going to help her.”

Lawyers say the Craig family is remaining optimistic about each of the ongoing investigations.

Fort Worth’s Mayor, Betsy Price, says City Hall has been receiving a lot of calls about the viral video. Congressman Marc Veasey says he plans to meet with city leaders, in the coming days, to discuss how they are handling community policing funds Fort Worth received from the Department of Justice.

State Rep. Nicole Collier said she was outraged over the video, but urged the public to wait for the full investigation to be completed.

"None of us standing here that saw that video believe that that represents acceptable behavior," Commissioner Roy Brooks said.