James Moore has been an employee with the Lewisville Independent School District since May 2008, officials say. 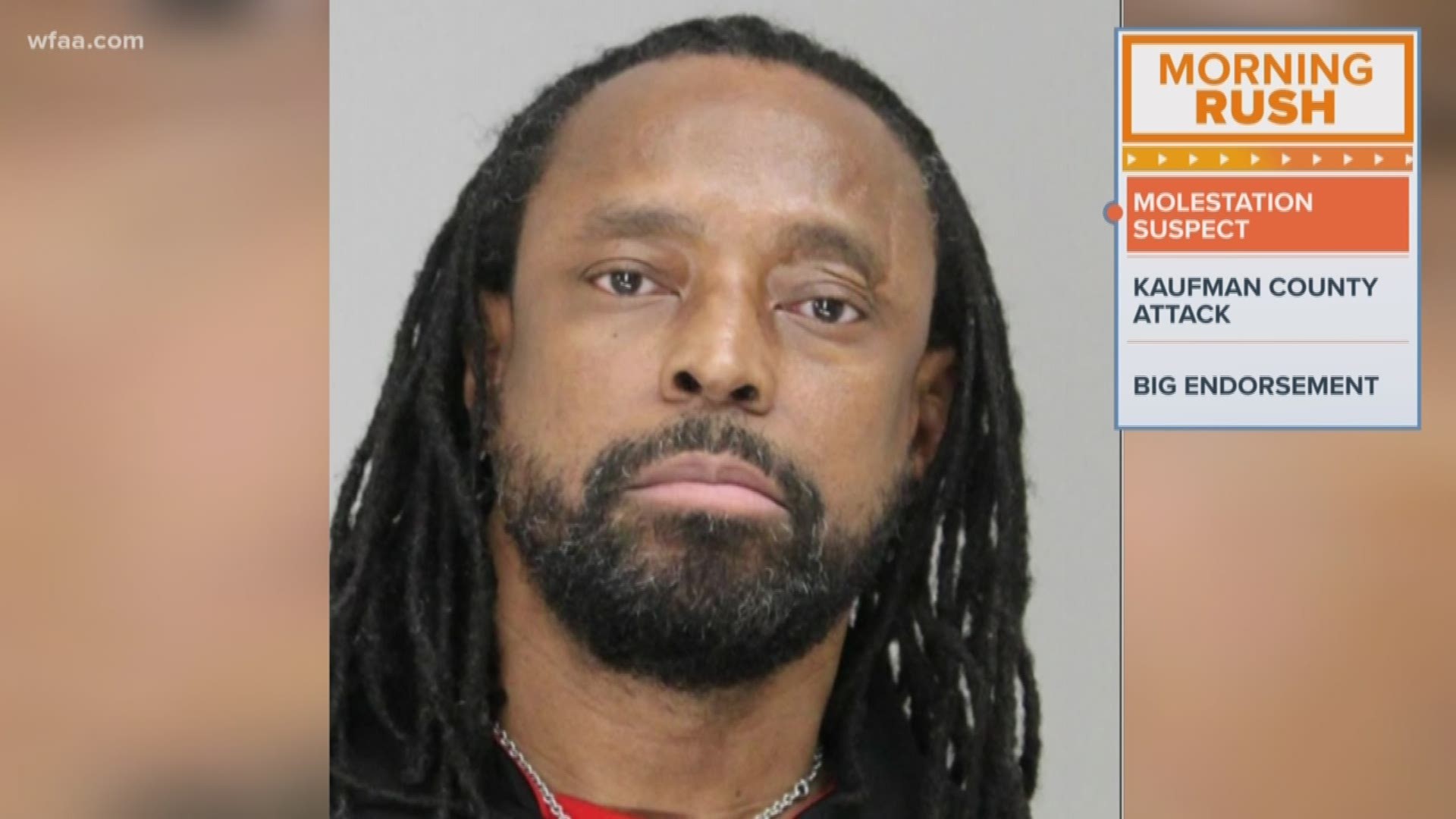 DALLAS — A Spanish teacher at Flower Mound High School was arrested Monday and faces a charge of indecency to a child, police say.

James Moore, 58, is accused in connection with an incident four years ago that occurred at a private residence, according to an arrest warrant affidavit.

School officials said the situation did not involve a current student.

According to the affidavit, the incident occurred when the victim was 13 years old.

Dallas police say they are concerned there may be additional victims because Moore has been an employee with the Lewisville Independent School District since May 2008.

On Tuesday, school officials confirmed Moore was placed on administrative leave in connection with the criminal investigation.

The alleged victim told detectives that Moore helped his family adjust to life after relocating to the area in 2014, according to the arrest warrant affidavit.

The victim’s parents have also worked as teachers, and the teen told investigators he trusted Moore because he was a Spanish teacher, the arrest documents show.

The alleged assaults did not occur on school property, according to police records.

The teen told investigators that Moore used to take him and his siblings to Six Flags often. He told authorities that Moore brought him Oakley sunglasses and a PlayStation but only for him, not his siblings, according to the arrest records.

The victim and his siblings often spent the night at Moore's apartment and would sleep on a couch in the living room, documents state.

According to the affidavit, the teen said Moore bought him a computer tablet and then told the victim to lie to his parents and say it was loaned.

The teen said around June 2015, he was the only one of his siblings who went to Moore’s apartment to spend the night.

The victim said he went to sleep on the couch but then Moore sent him a Facebook message telling the boy to sleep with him in the bed, the affidavit states.

The victim said no but then Moore guilted the teen and said he felt sad and used by him after giving him a computer tablet, police documents state.

According to authorities, the teen said the next morning Moore acted like nothing had happened and invited him to church.

The victim told Moore no. He said Moore then returned later with a new pair of sunglasses for him.

The teen told police he saw Moore again later, believing he could give the teacher another chance because the teen considered him to be family. The victim said Moore forced him to sleep in the same bed and molested him every night over the course of a week.

The teen said his mother asked what was wrong after noticing the victim “acting rude” to Moore.

According to the affidavit, Moore “acted like the victim" and told the teen’s mother that he had been rude and disrespectful all week.

The victim said he became angry when Moore acted like he hadn’t done anything wrong and told his mother that nothing was wrong, police records show.

Moore molested the victim one more time while spending the night in the family’s apartment.

According to documents, the teen told his sister about what happened and she suggested the victim messaged Moore on Facebook messenger to get proof of what he had done.

The teen told Moore he was angry about the incident and Moore admitted to molesting the victim and apologized, the arrest affidavit says.

Investigators say the teen also told his mother what happened. According to the affidavit, the victim’s mother called Moore and told him to never come near the teen or the family again.

Moore called back and left a voicemail and apologized. The teen said he didn’t want to report anything to police at the time because he “felt embarrassed and nasty.”

The victim agreed to call Moore in a recorded phone call at police headquarters. According to the affidavit, Moore admitted to molesting the victim.

Earlier this month, the victim reported the incident to a teacher at a Dallas high school.

That teacher had told his students he was leaving the school to take a position at Flower Mound High School.

That statement "brought back a flood of memories that [the teen] had tried not to think about for four years,” the documents state.

The victim said he realized he needed to talk to someone about the incident and trusted the teacher who was relocating to FMHS.

The teacher told his supervisors and police about the incident.

FMHS officials sent the following statement to parents and guardians:

We think it is important to keep you informed of situations happening on our campus, even if your student isn’t directly impacted. FMHS Spanish teacher James Moore was arrested yesterday by the Dallas Police Department (DPD) and charged with indecency with a child. Mr. Moore was immediately placed on administrative leave by the district.

We know you may have questions, but we are not privy to any additional information, as this is an ongoing DPD investigation. At this time we do not believe this situation involved an FMHS or Lewisville ISD student, but if you or your student has any information you believe may be important, we want to encourage you to reach out to DPD or a trusted adult at school. You can read what the DPD released regarding the situation on the DPD Beat website.

Please don’t hesitate to reach out to us if you believe your student needs additional support in response to this situation.”

According to jail records, Moore remains in custody in lieu of a $25,000 bail.

Dallas police ask anyone with information regarding Moore to contact Det. Rodriguez or a supervisor within the Dallas Police Department’s Child Exploitation Squad at 214-671-4200.