Five other officers are on administrative leave, the department said. 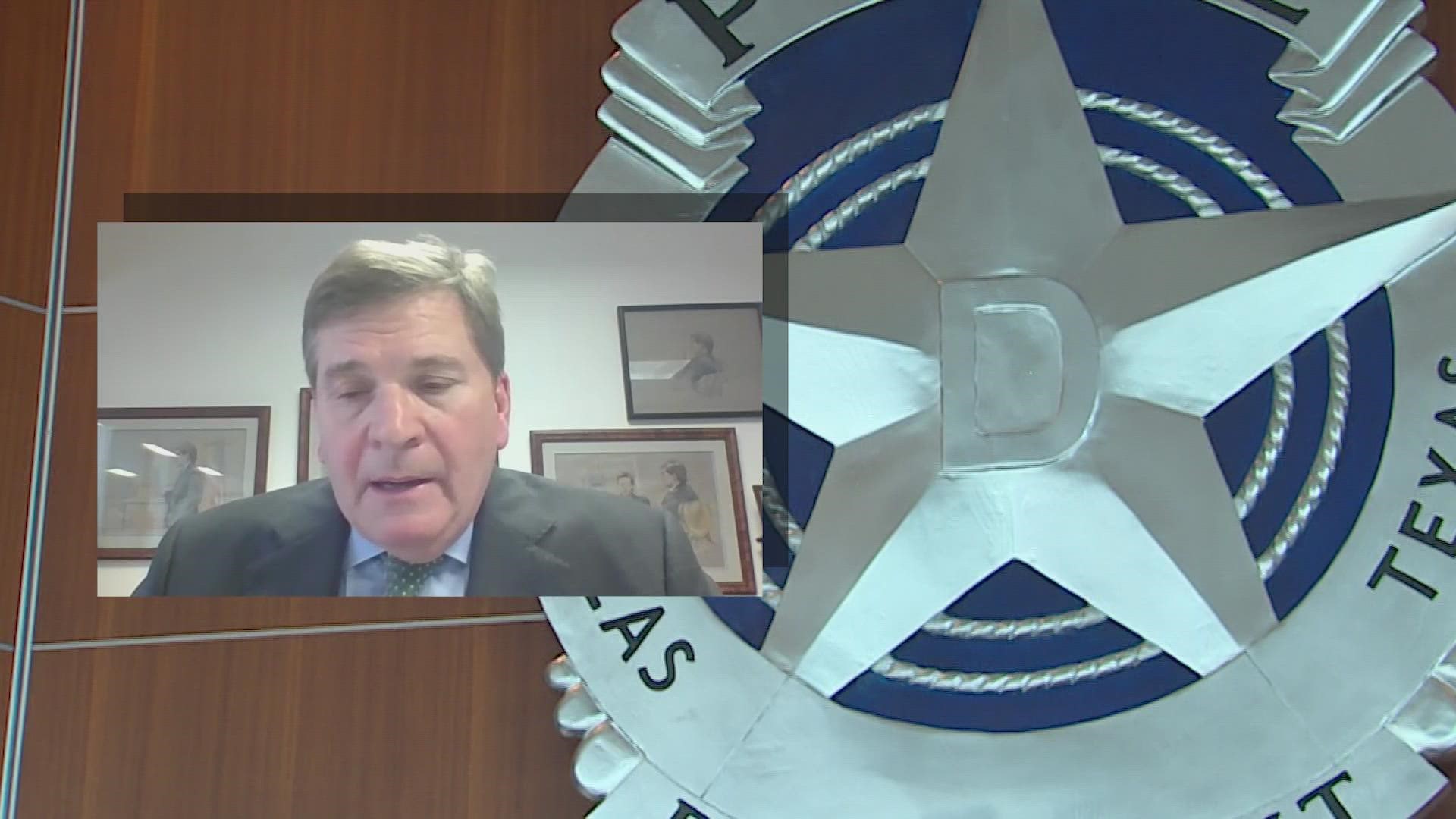 DALLAS — This story will be updated throughout the day Tuesday as new information comes in.

Dallas police have issued a warrant for one of their own officers and placed five others on administrative leave after the department uncovered video of an illegal search.

Tuesday morning, a warrant was issued for officer Jacob Hughes, badge no. 11160, for fabricating physical evidence.

Around noon Tuesday, DeSoto police said in a news release Hughes turned himself into the DeSoto Police Department for an active felony warrant issued for fabricating physical evidence.

Hughes has been with the Dallas Police Department since March 2016, according to a Tuesday afternoon news release from the department. He is now on administrative leave pending the outcome of an Internal Affairs investigation.

On Dec. 9, 2020 Dallas police responded to a call about a man shooting a gun near a Motel 6 on R.L Thornton Freeway.

"They were moving fast because there was a man shooting at cars on the highway and they wanted to stop the threat,” said defense attorney Toby Shook, who is representing Hughes.

According to court documents, officers claimed once they arrived they went up to the third floor of the building where they confronted Terry Yearling.

Officers discovered three shell casings on the floor in front of room 304, according to an arrest affidavit.

They claimed when they knocked on Yearling’s hotel room, he opened the door, saw the officers, then quickly shut it. Officers said they then heard Yearling chambering a round in a handgun and ordered him to open the door again.

In court documents, officers claimed Yearling opened the door, but the officers had to take him down when he was uncooperative. Yearling was arrested.

Officers claimed they questioned Yearling about where the gun was and they said he told them it was under a mattress. Officers confiscated the weapon.

But Dallas police say they began reviewing body camera footage of the incident and determined that officers had lied on the report and that they illegally searched the room without a warrant.

Dallas police sources say Yearling did not open the door. Instead, officers got a key card to let themselves into the motel room. Sources say that can be seen on body camera footage. Officers never got a warrant to search the room.

Yearling did plead guilty to the charge because he was a felon in possession of a firearm and was facing federal charges.

His attorneys are now trying to get his conviction overturned.

"He winds up having to write the police report, he doesn’t get a chance to look at the body camera," Shook said. "He’s down at the jail writing the police report from memory and he didn’t put in the fact that someone went and got a card to open this guy’s hotel room once the door is shut.”

Shook says it was a mistake. Dallas police say it was an illegal search.

Shook wonders why no one in the public defender's office or the District Attorney's office reviewed the bodycam footage before that happened.

Dallas County District Attorney John Creuzot says the suspect pleaded guilty very quickly and they never got a chance to review the footage.

Dallas Police Chief Eddie Garcia says this is another case in which he plans to hold officers accountable.

"We are a large police department that hires from the human race," Garcia said. "I don’t shy away from it, and no police chief in America should and it’s something that needs to happen to build the confidence not only in our community but to build the confidence of the men and women of this department to have in their administration. As long as things are done fairly and there is procedural justice in the organization then we’ll get better and the whole point is to get better."

Currently, there are 18 Dallas police officers in different cases who will be taken before a grand jury for allegations they might have broken the law.

Yearling has been in prison for months but has been transferred to the Dallas County jail while his attorneys work to have him released. His case is now before the Court of Criminal Appeals.

In addition to the warrant for Hughes' arrest, the investigation also resulted in grand jury referrals for official oppression for Dallas police officers Nathan Newman, Bradley Williams, Thomas Foster, Moses Munoz and Dylan Nelson, according to the Tuesday news release.

Garcia told WFAA in a previous interview that he would support officers when they do good work but would hold officers accountable who violate the law or Dallas police policy.

“Although I am extremely disheartened by what this investigation revealed, I am proud of the internal control measures performed by the supervisors that exposed the actions of those involved," Garcia wrote in the Tuesday news release. "When we work together and hold all officers accountable for their actions, we build trust among ourselves and the community we serve.”