Dallas Police Chief U. Reneé Hall defended her plans and leadership as a council questioned her about the increase in crime. 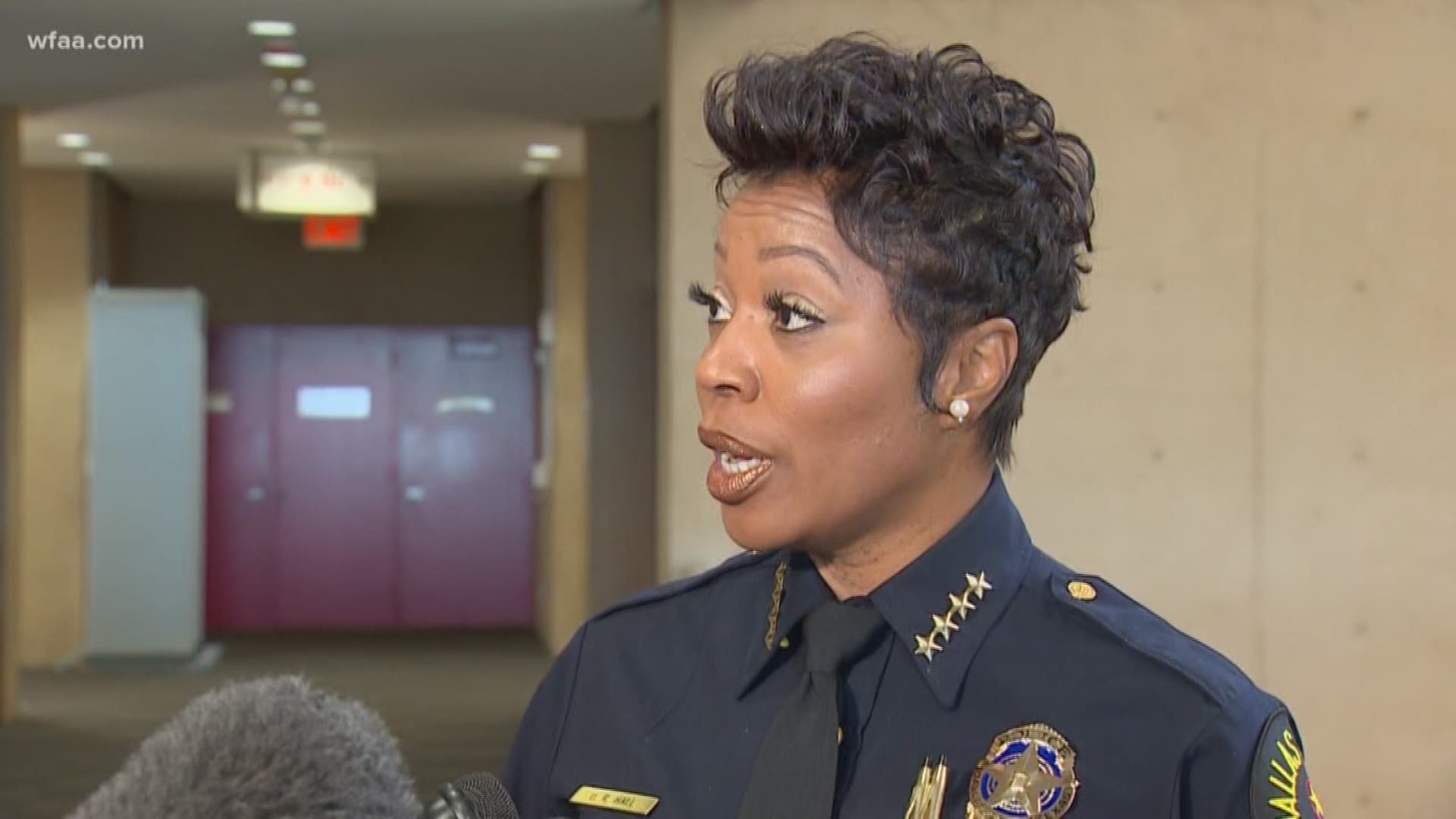 The city's violent crime and murder rate are one of the worst in more than a decade.

"Where we are right now with 97 murders, we did an analysis to say that if each month is consistent with previous months and previous years, then we could be on pace with 228 murders this year,” Hall said.

City council members asked Hall for specifics on what she’s doing to decrease the number of crimes and to change the perception that Dallas is becoming a violent city.

"There is a feeling that if somebody wants to commit a crime they can get away with it,” said Adam McGough, a public safety chairperson.

Saying she's doing what she can, Hall defended her leadership and her plans to fight violence. But she added at the end of the day, it's not just a police problem but a societal problem as well.

Hall said crime is also an issue of socioeconomics.

Past chiefs, including David Brown and David Kunkle, also addressed this issue and created outreach programs for teenagers and the community.

“You can’t arrest your way out of crime," Kunkle was often quoted as saying.

Both Kunkle and Brown believed that economic development would help build up communities where there was high crime.

Hall told the council Dallas isn’t the only area city seeing an increase in crime. The chief pointed to Lewisville and Frisco, where she said they had an increase in murders and rapes.

But a closer look at those numbers shows Frisco had zero murders at this time last year, and this year the city has only had one murder. Hall told the council that was a 100 percent increase.

Frisco had 15 rapes this time last year, and increased to 16.

Lewisville also had zero murders and now they have one.

Rapes in Lewisville went from four to eight.

Plano actually had a decrease in crime, as did other Texas cities like Houston and San Antonio.

McGough said the chief isn't doing enough to change the perception of Dallas being violent or improving the crime numbers.

"Since the day I walked in the door there has been a focus on reducing violent crime," Hall said. "It’s the number one strategy for our city."

Hall said she's counting on the governor to send in troopers to help fight crime and plans on targeting businesses and areas where crime tends to increase in the summer months.

RELATED: After 41 homicide investigations in May, Dallas Police continue work while down nearly 700 officers

In 2016, Gov. Greg Abbott also promised support to help fight violent crime. It was not permanent and no one can recall the specifics.

Hall said she does not know what resources the governor will send and says there will be meetings in the coming days to determine that.

Hall said she will come back to the council with more results of a crime-fighting initiative, which has yielded the arrest of 53 violent crime suspects.

She said officers will target several areas, including Jim’s Car Wash and Bachman Lake, which are traditional hot spots for crime.

Hall said she needs more time and resources to slow down the increase in crime but it’s clear the patience of some council members are wearing thin.

“It is the first job of our City to ensure the safety of our residents. Right now, our neighbors do not feel safe, and the recent increase in violent crimes furthers that narrative. I am thankful for the efforts of the Dallas Police Department, and I believe our officers are working tirelessly to protect and serve our communities.

“Chief Hall has made efforts to pull together a strategy to decrease violent crime, and I support the steps discussed in the briefing today. However, the underlying causes still must be addressed. A perception problem exists in our City where some believe offenders will not get caught, they will not be prosecuted, or there are certain conditions that excuse criminal behavior. We must course correct now. We need our entire community, including our City leadership, law enforcement, advocates, churches, and neighbors, to come together to declare crime will not be tolerated.

As a City, we must address the systemic racist policies that have segregated our communities and denied opportunities based on ignorance and geography. We must focus resources on youth activities, education, housing, jobs, transportation and real policy reform without undercutting the fact that every crime deserves justice. Accountability and reform are not mutually exclusive; in fact, they are dependent. Once we all speak with unwavering resolve, we will see crime reduction in our city.

We have very real issues facing our police department – recruiting, retention, and morale. All demand transparent strategies and measured goals. Let’s learn from other cities across the country who have done this successfully. How many local and state officers do we need? Where and how should we deploy them?  What changes are needed with field training and investigations?  What additional technology and equipment is needed?  We must address short term goals of remediating crime while designing strategies to address prevention and long-term impact.

The City of Dallas is poised to lead the way on positive reforms and community engagement, but we will only be successful with intentional strategies and with an unwavering resolve to put the safety of our citizens above all else.”