Derion Vence, who had been engaged to 4-year-old Maleah's mother, is the last known person to see the girl. Vence was arrested Saturday. 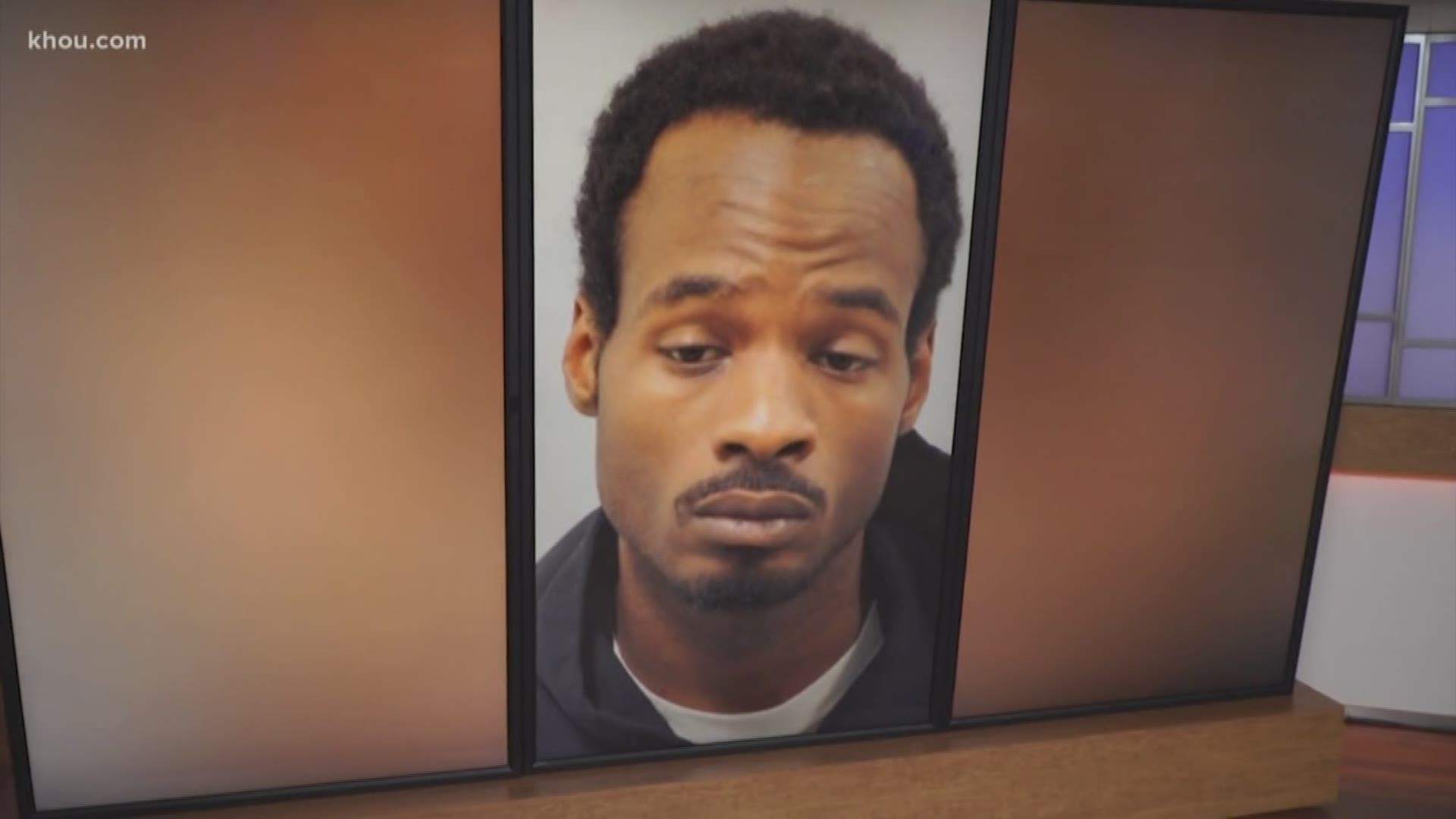 Derion Vence, 26, is charged with tampering with evidence in connection with her disappearance. The Gulf Coast Violent Offenders and Fugitives Task Force arrested Vence around 2:40 p.m. in Sugar Land.

According to court documents released Sunday, a chemical was sprayed in Vence's apartment to detect blood that isn't visible to the naked eye. The chemical reacts when a person tries to clean up blood.

Blood was detected in the hallway and the bathroom of the apartment.

Samples were taken and investigators found the samples were consistent with DNA taken from Maleah's toothbrush.

HPD detectives say in addition to blood evidence linked to Maleah being found at the apartment, Vence was also seen carrying a laundry basket from the apartment.

The laundry basket was found in the trunk of the Nissan along with a gas can, according to HPD.

Credit: KHOU 11 News
A gas can was found in the trunk of Derion Vence's Nissan Altima, which police say he lied about being stolen.

Although Vence reported his Altima was taken in an abduction, surveillance video showed someone in that Nissan Altima dropped Vence off at the Methodist Sugar Land Hospital on May 5, according to police.

Vence, who had been engaged to Maleah's mother, is the last known person to see Maleah and recent video shared by a neighbor with police shows him with bottles of Clorox and a garbage bag before Maleah was reported missing.

Maleah's mother previously threatened to break up with Vence because of infidelity allegations, according to local activist Quanell X, who appeared with the mother in front of reporters Friday.

Monday, May 13, 10:22 a.m.: KHOU 11 has obtained what is believed to be the last image of Maleah Davis from a law enforcement source. It appears to show the missing 4-year-old following Derion Vence. It was taken on April 30, according to police.

Monday, May 13, 9 a.m.: Derion Vence was expected in a Houston courtroom but the hearing was reset. Maleah's mother and Quanell X were in the courtroom.

A crowd of bystanders yelled at Brittany Bowens as she left the courtroom, asking "where's Maleah?"

Sunday, May 12: According to court documents released Sunday, a chemical was sprayed in Vence's apartment to detect for blood that isn't visible to the naked eye. Blood was detected in the hallway and bathroom of the apartment.

Samples were taken and investigators found the samples were consistent with DNA taken from Maleah's toothbrush.

Saturday p.m.,  May 11: Maleah's great grandmother says she jumped for joy when she heard Derion Vence had been arrested and charged with tampering with evidence. Her grandfather says it's hard to be happy because he knows Maleah is still out there.

Saturday, May 11, 4:35 p.m: The Gulf Coast Violent Offenders and Fugitives Task Force arrested Derion Vence at a relative's house in Sugar Land on charges of evidence tampering. HPD detectives say in addition to blood evidence linked to Maleah being found at the apartment, Vence was also seen carrying a laundry basket from the apartment.

Friday, May 10, 2:15 p.m. Local activist Quanell X made explosive new claims on behalf of Maleah's mother, Brittany Bowens, about Maleah's stepfather, Derion Vence. Quanell said Vence was seen on a neighbor's security camera with bottles of Clorox and a garbage bag before Maleah was reported missing.

Quanell said Bowens previously threatened to break up with Vence because she found explicit pictures he sent to another man.

Thursday, May 9, 10:40 a.m. Maleah's mother is consoled by detectives after she shows up at scene where her husband's missing cars was found. "Where is my baby?," she cried.

Thursday, May 9, 10:30 a.m.: Police searched the trunk for evidence in the case, and later said they found a laundry basket and gas can.

"The car looks fine, everything on the car looks normal, the tires look OK," a law enforcement officer said. "Doesn't mean they weren't changed at some point. I don't know anything on that, really."

Thursday, May 9, 10:20 a.m.: Missouri City police confirm the missing car belonging to Maleah stepfather has been found. Eqqusearch volunteers say they found it in a strip center parking lot near Highway 6 and Riverstone Blvd.

Thursday, May 9: The owner of Maleah's daycare told KHOU that they haven't seen her since April 26. The owner said Vence picked up his son Friday but Maleah wasn't with him.

She said Maleah's classmates are asking about her.

The search group is telling its volunteers to be prepared for wet and muddy conditions, advising them to dress appropriately for the rainy forecast.

This morning's staging area is the 9700 block of S. Kirkwood in southwest Houston. Equusearch says its teams will be on foot and on ATV searching "in some very specific areas" for any signs of the child and the vehicle she was last known to be in - her stepdad's stolen Nissan.

Wednesday, May 8, 1:30 p.m.:  Houston police released new photos of the car tied to the disappearance of a Houston child and police want you to be on the lookout for it.

The car is a Nissan Altima with paper tag 330-92G9.  It’s the car that Derion Vence was reportedly driving when he was allegedly assaulted and abducted along with his stepdaughter, 4-year-old Maleah Davis, and his one-year-old son.

The photos of the car were taken before Maleah disappeared.

Wednesday, May 8, a.m.: Texas Equusearch says its volunteers have halted all search efforts for Maleah Davis, the little girl who was reportedly kidnapped on Friday evening.

Poor weather conditions and saturated grounds have made search efforts difficult for the time being.

Tuesday, May 7, 4 p.m.: Search efforts were suspended due to severe weather in the Houston area.

Tuesday, May 7, 2 p.m.: A spokesman for Sugar Land police said Vence’s story on how he got to the hospital has changed since he first spoke with investigators and it didn’t add up.

Tuesday, May 7, 12:30 p.m.: Search efforts are moved to southwest Houston near the family's apartment complex on Bissonnet at Kirkwood.

Tuesday, May 7, 12:00 p.m.: “It's a process of elimination. I think we've done about everything we can do up here," said Texas Equusearch founder Tim Miller. He said he feels they have pretty much covered the area where Maleah’s stepfather claims she was kidnapped.

Tuesday, May 7, morning: Texas Equusearch volunteers were back out in a wooded area near the Eastex Freeway and Greens Road.

Monday, May 6, 6.p.m.: Volunteers will meet in Sugar Land to hand out fliers with Maleah's photo.

Monday afternoon: Dozens of Eqqusearch volunteers braved the heat and spent hours searching for Maleah in a wooded area near Bush Airport.

Monday, May 6, 11:28 a.m.: "We're hoping for the best, but expecting the worst," Eqqusearch founder Tim Miller told KHOU. He got choked up when he talked about how tough missing kid cases are.

Monday, May 6, 10:30 a.m.: A Texas Equusearch team of volunteers joined the search for Maleah. They began searching on foot and ATVs around 10:30 a.m. near Hwy. 59/Eastex and Greens Road, not far from Bush Intercontinental Airport.

That's where Maleah's stepfather, Derion Vence, told investigators he had car trouble as he was driving to the airport to pick up the girl's mother.

"It's a child," Dominique Bryant said. "There are families out here with children. We're just asking them to share the flyer on social media."

Bryant reminds everyone that time is of the essence.

"It's the most important thing right now," Bryant said. "I know a lot of people are tied up with the story and what's true or not true, or what makes sense, but that's not important right now. The focus is getting her home safely and as soon as possible."

Sunday, May 5, afternoon.: Houston police released video from traffic cameras that captured the 2011 Nissan Altima Vence was driving. The vehicle was in Sugar Land around 3 p.m. Saturday. It had recently been purchased and has temporary tags with the license plate 3092G9.

Saturday, May 4, around midnight: HPD was notified that Maleah was missing.

Saturday, May 4, 9 to 10 p.m.: Vence arrived at Sugar Land Methodist Hospital with his son, Courtland. He was treated for a head injury. Courtland wasn't injured.

Saturday May 4, night: Vence said he walked around, asking for help but everyone ignored his pleas.

Saturday, May 4, 6 p.m. Vence said he was in and out of consciousness and didn't really know where he was until 6 p.m. Saturday.

He told police he woke up somewhere off Highway 6 in the Sugar Land area with Courtland in his arms. There was no sign of Maleah.

Friday, May 3 or Saturday, May 4: Vence said he woke up at one point and was in the back of the pickup truck with both children.

Friday, May 3, night: Maleah's mother, Brittany, who had been flying in from Massachusetts, called someone else to pick her up from the airport when Vence didn't show up.

According to Maleah's grandmother, Brittany was traveling back to Houston after attending her own father's funeral.

Friday, May 3, after 9 p.m.: While he was near Highway 59 and Greens Road, Vence said he heard a noise and pulled over to check one of his tires. While he was out of his car, he says he was approached by two men who were in a blue Chevrolet pickup truck.

"Two Hispanic males get out. One of the men makes a comment, that Malia looks very sweet, looks very nice," said Mark Hollbrook with Houston police homicide. "One of the males hits Derion in the head. Derion loses consciousness.”

Vence said the men put him, Maleah and Courtland in their blue pickup and drove off.

Friday, May 3, night: Vence, told investigators he was driving to Bush Intercontinental Airport Friday with the children. He said they were headed to pick up Maleah's mother. Police were not only looking for Maleah. They were also looking for the blue Chevrolet crew cab pickup that the alleged suspects were driving as well as a stolen Nissan Altima, which has now been located.

Anyone with information on Maleah Davis' whereabouts is urged to contact Houston police at 713-308-3600 or Crime Stoppers at 713-222-TIPS. Police also want to hear from anyone who may have seen Darion and his son on walking on Highway 6 or Highway 59 on Saturday.