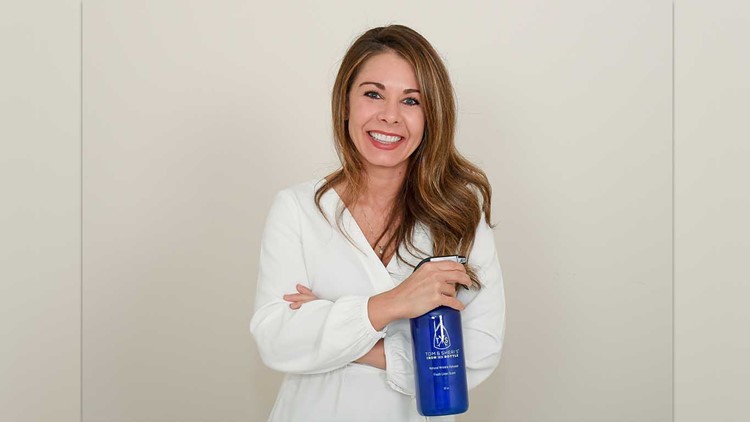 Heather Wilson was working with Austin Eudaly – helping with the North Texas entrepreneur’s oil and gas, dating app, and documentary ventures – when she walked into the office to find him surrounded by bottles of wrinkle-release spray.

Eudaly explained that he was trying out the sprays and was interested in creating a brand that was more accessible, natural and safe.

After finding and working with a chemist to develop formulas for the wrinkle releaser in 2017, Eudaly began thinking about hiring someone to run sales and distribution for the product.

And Wilson realized that, given the opportunity to focus solely on this project, she could manage the operations-side of the consumer packaged goods startup.

While neither Wilson nor Eudaly had experience in the CPG space, Wilson’s affinity for numbers and consumer behavior balanced out Eudaly’s entrepreneurial drive.

Bottles and sprayers to test out began to flow into the office at the beginning of 2018, and Eudaly dubbed the product “Tom & Sheri’s Iron in a Bottle” – a nod to his parents.

Between more than 100 pre-order purchases and the online marketplace’s official opening, Tom & Sheri’s sold out of its first 6,000 bottles and brought in about $60,000 in sales between June and September.

INFLUENCER MARKETING AND IDENTIFYING THE DEMOGRAPHIC

Tom & Sheri’s has found its initial success through a brand ambassador approach.

“The big hits have really been from influencer marketing,” said Wilson.

For instance, Shay Shull, who is behind the blog “Mix & Match Mama,” posted the product among her “Friday Favorites” over the summer.

“We thought this would be a great opportunity (for brand recognition),” said Wilson. “Maybe we’d get 50 orders that day? And 900 orders later …”

Beyond brand recognition and sales, Wilson said that the posts from bloggers also helped Tom & Sheri’s broaden its initial idea of the product’s target audience. Eudaly and Wilson originally thought the product might resound most with young professional men – someone who might not own an iron, have the time to iron or that travels a great deal.

“I would say 90 percent of our (online) customers have been female. So, who actually ends up using the product is a different story,” said Wilson. “That young professional male is still a target demographic but … the decision maker in the laundry space tends to be a female.”

Beyond influencer and social media marketing, Eudaly took a hands-on approach in getting the product onto the shelves of brick-and-mortar retailers over the past summer.

For instance, he walked in cold to Stanley Korshak one day, and eventually landed a sit-down with Owner Crawford Brock. Now, Tom & Sheri’s can be found on the upscale retailer’s shelves.

Tom & Sheri’s can also be found at Dallas’ Culwell & Son and All Good Things Paper, in addition to Tin Lizzie’s in Oklahoma City.

Since receiving 60,000 more bottles of Tom & Sheri’s in September, the brand has surpassed $100,000 in sales with buyers in all 50 states and in four countries.

The new bottles of Tom & Sheri’s featured tweaks to the formula based on customer feedback.

Though the majority of sales have been online so far, Wilson and Eudaly are working on other ways to get Tom & Sheri’s in front of more consumers. That includes adding Mark Steinbrueck as a business development and sales consultant.

“In 2019, with new development strategies and selling in new markets – including QVC (in January) – we hope to hit the $1 million mark,” said Wilson. “We’d also love to be in Central Market, luxury hotels, cruise lines, airports, country clubs, and high-end gyms by the end of the year.”

Related: These are the 30 women business leaders to know in North Texas

When it comes to the CPG space, Wilson said understanding the purchase lead times has been the toughest part of the industry’s learning curve. But Tom & Sheri’s feels confident in the manufacturing and distribution partners that they have now.

“It allows us to focus on the other things, and scaling is easier to do at that point,” said Wilson.

In five years, Wilson anticipates that the Tom & Sheri’s line will expand beyond the Iron in the Bottle spray.

“We’d branch out from just the wrinkle releaser to maybe a laundry detergent and a stain pen with the focus being on family-friendly, values-driven natural products that are premium quality,” explained Wilson.

Tom & Sheri’s also plans to grow in the philanthropic space as well. Giving back to the community is among one of the company’s core values, and Wilson said they’ve already developed a partnership with “Attitudes and Attire.” The Dallas nonprofit provides clothing, training and confidence workshops for women who need help getting back on their feet.