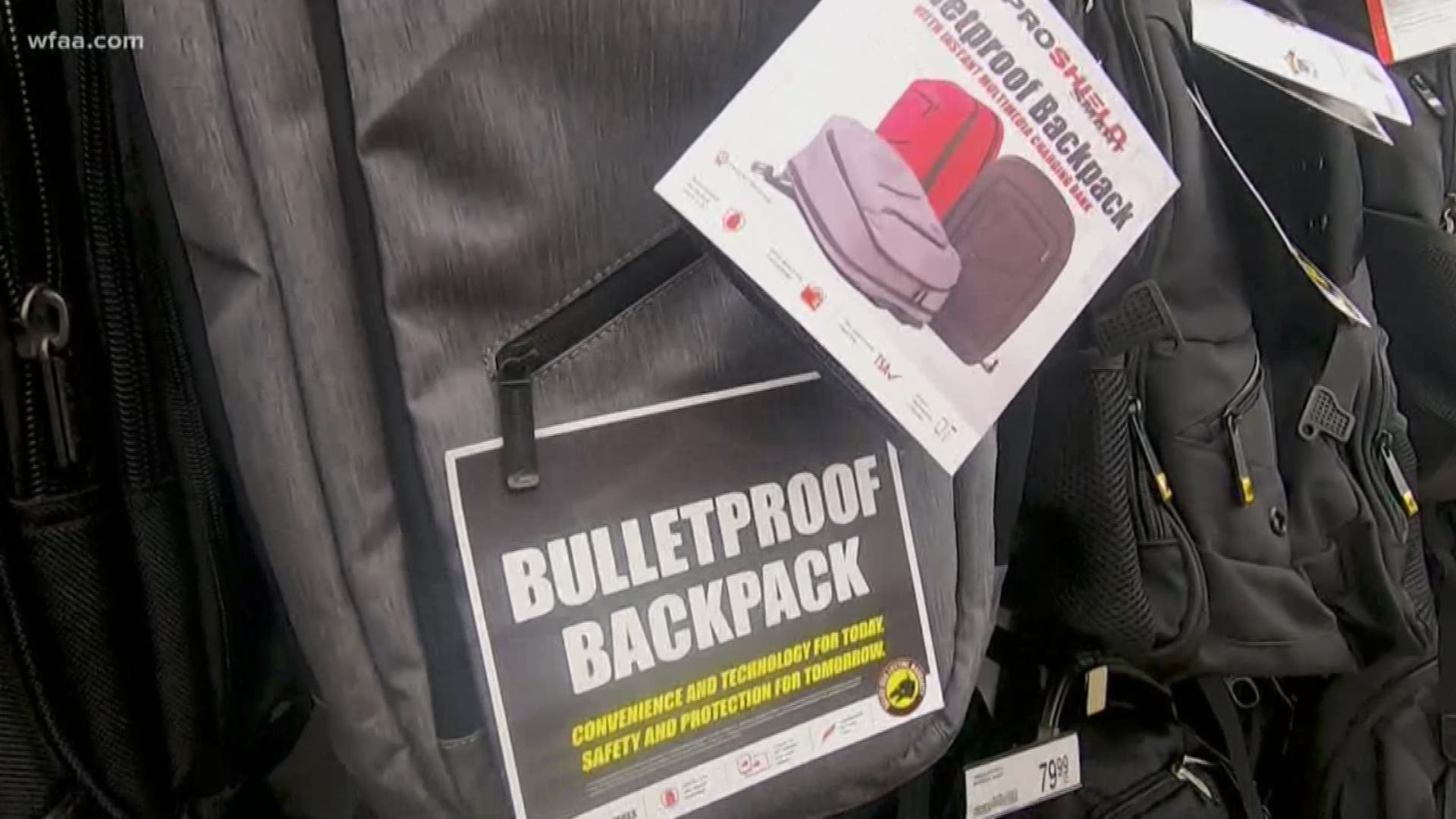 The options for back-to-school shoppers are endless just weeks before school actually starts. OfficeMax in Dallas is giving parents another option to consider: bulletproof backpacks.

Two different bulletproof backpacks by Guard Dog were on the shelves at the Haskell location in Dallas. The Pro-Shield Smart backpack boasts a Level III-A protection. The manual shows it's been tested against a .44 Magnum and a 9mm and passed a test with no bullet penetrations through the backpack.

WFAA also put the backpack to the firing test at the Garland Public Shooting Range with John Coulton, who has been an NRA Certified Instructor for 25 years. He said he's shot at many targets, but never a backpack.

First, Coulton shot a .45 caliber firearm from 21 feet away. It pierced a hole through much of the items inside the backpack. All the files, folders, and notebooks all had holes in them. It did not, however, pierce through to the back of the pack.

Next, Coulton fired the .44 Magnum.

While it pierced through most of the internal contents, it did not pierce through the back of the backpack. It did, however, do some serious damage to the back lining.

"As you can see it put a lot of energy through the target. It bowed the back of the backpack," Coulton said.

The manufacturer said it tested the bag with a .44 Magnum caliber five times and passed it with no penetrations.

Next up, Coulton shot an AR-15 with .223 caliber rounds, and it easily pierced its way through the back. The product description makes no mention of tests against this kind of rifle.

"Unfortunately, that is the weapon a lot of these school shootings are using. [The backpack] has potential for everything else, not for the rifles," Coulton said.

Campus Safety Magazine chief Robin Hattersley worries these products take advantage of people's fears. She cannot speak to the effectiveness of the product. But she does say it's very unlikely a student will have access to their backpack at all times during the school day and it's far far more unlikely a shooting event happens at their school.

"The student a lot of times doesn't even wear their backpack. Maybe they're in class or the library," Hattersley said.

Hattersley said parents should rather spend their time focusing on Internet safety and monitoring their child's social media. She said the online threats are very real threats that happen to schoolchildren every day. Hattersley also encouraged parents to be more active in their communities by attending safety and security meetings.

"Spending $200 on a bulletproof backpack doesn't seem to make a whole lot of sense," Hattersley said.

WFAA reached out to the Guard Dog manufacturer, and has not heard back.

The backpack is just another option for parents, and a pricey option at that. But it may be an option parents are willing to choose in these times.