George Tirado is getting the ashes of his best friend back from the TSA one day after he told his story to 6 News. 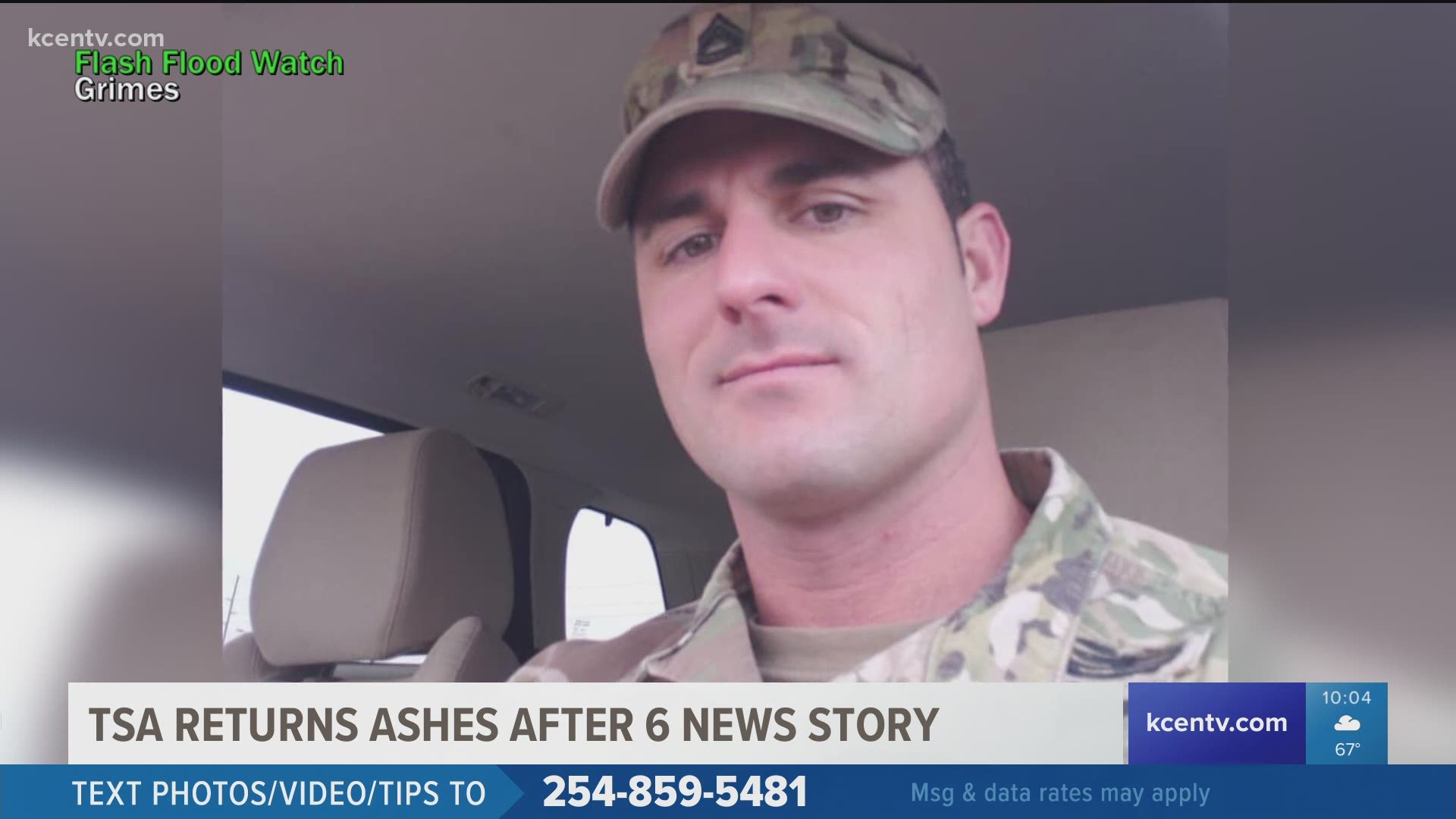 Retired soldier George Tirado told 6 News Wednesday he lost his best friend, again, after the TSA confiscated his platoon leader’s ashes because they were in a bullet necklace. The ashes are those of Sgt. First Class Richard Martin. Tirado said the platoon sergeant had been a mentor, a best friend, and even his best man.

On Thursday, less than 24 hours after 6 News aired the story, Tirado learned he was getting the ashes back.

Tirado said TSA spokeswoman Lisa Farbstein told him the ashes had been found and she wanted his information so she could send a picture of it to him and coordinate its return.

Tirado said he later got an email from a TSA supervisory program analyst that it was going to be sent via UPS for next day shipping.

"Sir, your replica bullet with ashes is enroute via UPS tracking along with a patch with the TSA lga," the email said. "Thank you for your service to our country."

RELATED: TSA confiscates soldier's ashes because they were in fake bullet

The ashes are those of Sgt. First Class Richard Martin. Tirado said he was his platoon sergeant in Afghanistan.

The men became friends after leaving the military, with Martin even serving as the best man in Tirado's wedding.

Tirado said Martin had served for 18 years and had seen six combat tours. He struggled with PTSD and Tirado said he committed suicide in 2019.

Tirado said he was going through airport security at LaGuardia Airport in New York on April 23 when the replica bullet was flagged and ultimately confiscated.

Tirado said he told told the officer what the fake bullet contained, showed him a bracelet that also had Martin's name on it, and explained he had been on multiple flights with the necklace and had made sure it would be allowed beforehand. Tirado said the officer called a supervisor but the only option available to him was to put the item in a checked bag.

Tirado's flight was about to board in the next twenty minutes and his wife and daughter were already at the gate. Tirado told 6 News, if he had been alone he would have missed the flight rather than lose the ashes.

"I felt like this was so wrong," Tirado said. "I would have missed the flight and rescheduled for another one if I had been able to."

Tirado told 6 News Thursday he was already reaching out to the TSA and the airline on the same day it happened. Tuesday, he filed a complaint with the TSA. He said he never heard back.

On Wednesday, 6 News reached out to TSA customer service, the TSA Office of Public Affairs, and The Port Authority of New York and New Jersey Media Relations Department.

6 News was contacted back by TSA spokeswoman Lisa Farbstein Thursday. She gave 6 News the following explanation of the event:

"When TSA officers detect a prohibited item at a checkpoint, the travelers are given a choice as to how they want to handle it. They can hand it off to a non-traveling companion, return it to their vehicle, place it in a checked bag, mail it home or to their destination if the airport has a mailing center, and the last resort is to surrender the item to TSA. In this case, unfortunately there was no non-traveling companion, no personal vehicle and no time to place the item in a checked bag. So Mr. Tirado surrendered the item to TSA. As a general rule, items that are surrendered to TSA become the property of TSA and are not returned. In this case, due to the unusual circumstances surrounding the item, it was located quickly and sent to Mr. Tirado via overnight shipping," Farbstein said via email.

Tirado took exception with the statement saying the item was surrendered and said he specifically asked if the item could be mailed and was told "no."

"I didn't surrender it. I was given no other choice. I would have missed my flight if I wasn't with my wife and daughter. We had five to ten minutes, at that point, to get to our flight for boarding," Tirado said.

Tirado was also not happy to hear this was an exception, as it meant in any other case the property would not have been returned. He said he worries he would never have seen the ashes again if he had not reached out to several media outlets, or had 6 News not aired the story.

"If this wasn't on TV, if this word was not spread, by the time that somebody looked at any of my emails it probably would have been lost at that point," Tirado said.

Tirado is now contacting local members of congress in an effort to change TSA policies.