A nomad runner: Why the Dallas Marathon winner is living in a van in the Rockies

Colby Mehmen runs about 20 miles per day in freezing temperatures and sleeps in a '76 Chevy. 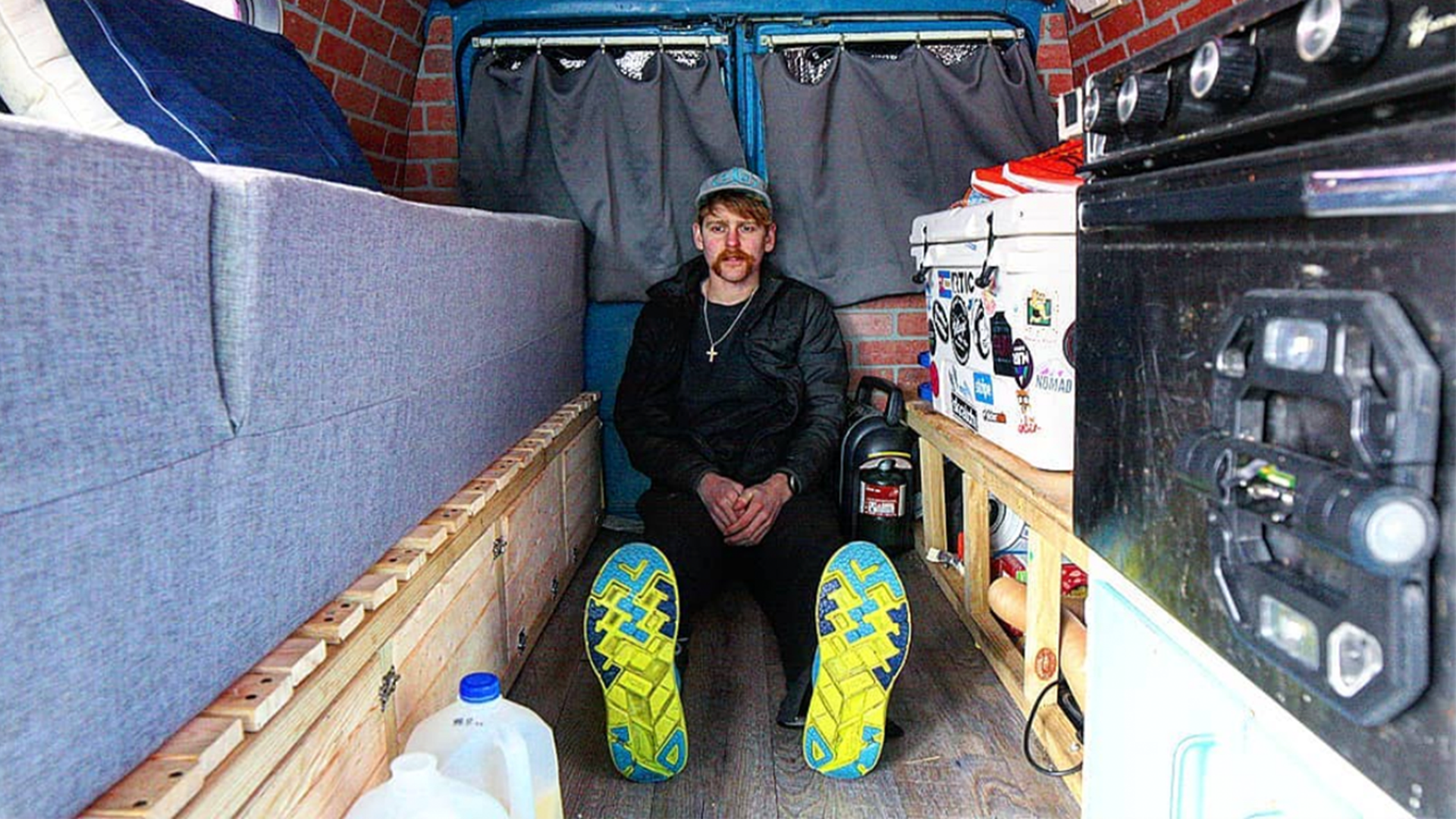 The Dallas Marathon winner lives in a blue camper van, at the foot of the Rockies, and showers at a public park. He scarfs down Cream of Wheat and oatmeal for breakfast and tacos for dinner. And at night, when the freezing Colorado air cuts through the walls of his ‘76 Chevy, he huddles by a propane heater, buried in blankets and wrapped in a sleeping bag.

This is the life Colby Mehmen and his buddies dreamed about in college, running free in the woods, not a thing in the world tying them down.

Then one day last summer, Mehmen, 24, decided to live it.

He packed up his belongings at his home in Collin County and made the long haul to Boulder, Colo., where he parks behind bars, runs 20 miles per day and works full-time at a running store.

“‘Living the dream’ – I know that’s what people say,” Mehmen said. “But sometimes I’m in the van and I’m like, ‘Alright, you’re doing it. This is your story that you’re going to make, and one day you’re going to tell it when you’re older.'”

His life in Boulder isn’t just a wandering freedom journey; it was a practical step for a post-collegiate runner trying his hand at professional distance running. Northwest of Denver, the city sits at 5,300 feet, with access to the Rockies for even higher altitude training.

It’s also stock full of pros. They pop into the Boulder Running Company, where Mehmen works, and he passes them on the trails around town.

“You see a guy come in the store, and think, ‘Man, he’s looking fit,’” Mehmen said. “It kind of subliminally makes you work hard. It’s like a mind game that helps you get better.”

Better, for Mehmen, is improving his marathon time by a matter of minutes, which means improving his mile pace by a matter of seconds. His winning time in Dallas in December – 2 hours, 22 minutes and 40 seconds, a clip of about 5:15 per mile in his marathon debut – landed him on the cusp of the Olympic marathon trials standard of 2:19:00. He also won the Dallas Half Marathon in 2016 and 2017 and qualified for the U.S. Half Marathon Championships in April.

In Dallas, Mehmen battled hamstring cramps in the final miles and ran solo for most of the route, which takes runners around White Rock Lake and up the infamous Winsted Drive hill on Mile 20.

More conditioning and a faster field should push him within the Olympic trials standard in time to qualify for the February 2020 race in Atlanta.

He’ll get the faster field at his next marathon, the Grandma’s Marathon in Duluth, Minn., in June, and he’ll get the training in Colorado.

Then again, Mehmen’s life in Colorado – his life in the van – is tied into something deeper than just a regimented routine.

It’s about why he bought the old Chevy van in the first place.

Mehmen, who grew up in Princeton in Collin County, faced only one minor roadblock: He wasn’t fast.

He found a spot at Stephen F. Austin, a Division One school in Nacogdoches, a small town in East Texas. He started out with a $150-per-semester scholarship and redshirted his freshman season.

“I thought, ‘Maybe I’ll just go to college, have a good career and it’ll be over,’” Mehmen said.

"Freshman year, I kind of had a re-ignition of that spark," Mehmen said, "and it hasn't really let out since."

In 2016, he qualified for the NCAA West prelims in the 10K and finished 27th. But he beat two Oregon Ducks and a handful of others from schools like Stanford and UCLA. He was competing at his peak, against athletes from colleges that hadn't known his name.

Then he walked away from the team.

"It was something I had to think about for over a year," Mehmen said. "But the 10K, I just felt like it was a really short race for me. I needed to try to get a step up on everybody. I knew that once I left college, I probably wasn't going to join a group. I was going to be on my own anyway. I just had to take a step back and try to make a smart decision."

With his scholarship gone, too, Mehmen needed a cheap place to live.

The dreams about living in a van became a reality: He bought the ‘76 Chevy in Oklahoma for $3,000, drove it back to Texas and parked it in a friend’s front yard, where he spent his final year at Stephen F. Austin.

Around the same time, Mehmen, training on his own, created a running brand in that same spirit: The Nomad Running Society.

"Nomad was kind of like that loner mentality," Mehmen said. "You don't need to be with a big group of people. You don't have to go to a huge college, to be successful. You can just do it on your own."

He formed the company with friends Luke Scribner, who ran collegiately at Tarleton State in Stephenville, and Tyler Hemenway, who competed at Texas A&M-Commerce.

All three runners grew up in Collin County. All three wanted to create a fun, but competitive, running club based in North Texas.

"It started off as an idea just trying to get a group in the Dallas area to get excited about running," said Scribner, who's now a cross country coach at A&M-Commerce.

The company started with a little of everything: Custom singlets, the first of which were sewed by Mehmen and his grandmother; YouTube videos and Instagram posts; social runs at White Rock Lake on Sunday mornings; coaching sessions.

In the last year, Nomad has scaled back, focusing on its line of custom singlets and coaching gigs – and cultivating a speedy collection of runners.

Ricky Romero, another Nomad runner, qualified for the U.S. Indoor Championships last year, in the 800 meters, entering the same field as runners sponsored by Nike, Brooks, and Hoka One One. Romero, a Division II national champion at A&M-Commerce, missed the finals by two spots.

"We love hobby jogging as much as anybody else," said Hemenway, who works as a commercial real estate agent. "But we love that next level...If soccer compared to running, we're that group below the Premier League that's fighting to get into it."

When Mehmen went out with the lead pack at the marathon in December, a crew of Nomads followed close behind, decked out in bright blue and orange singlets that featured a mix of the Dallas skyline and mountains.

"You can't look bad wearing a Nomad singlet now, especially if Colby is winning the Dallas Marathon," Scribner said. "When you step to the line, you better saddle up."

'The dream I'm going to tell about'

In Boulder, Mehmen's biggest battle is the cold.

The van is equipped with a pullout bed, a stove, a small fridge and a heater. A propane tank beneath the van powers the appliances.

There are, of course, limitations to such a setup: The heater emits about as much warmth as a single car vent, so the temperature inside the van hovers around 40 degrees.

On the real cold nights, nearly everything in the van but Mehmen will freeze. His clothes. His towels. His gallon jugs of water.

If he qualifies for the Olympic marathon trials, he'll have to decide whether he wants to spend another winter in the Colorado cold, leading up to the race.

The freezing weather, he said, is easier to endure than the opposite. When he first bought the van, he spent a summer in Houston.

"He was living in a blue, windowless van, in a Target parking lot, with not enough money for gas to keep the AC on at night," Hemenway said. "If he could do that, he could live in Colorado."

But the Houston heat beat Mehmen down, and he moved back to Collin County.

He lived with Scribner – then a cross country coach at Melissa High School –worked at a RunOn! store and spent the weekends racing, racking up wins in everything from the Dallas Half (twice) to the Hot Chocolate 15K to the Dash Down Greenville Avenue 5K. One Saturday last April, he showed up at the Plano Pacers 8K club race and set the course record.

But when the chance arose to transfer to the Boulder Running Company, Mehmen took it.

"When I told my dad, I’m moving to Colorado and taking the van, he said, 'No, you’re not,'" Mehmen said. "Then the next day he was out there helping me get the van prepared."

Scribner, who had just gotten a coaching job at Texas A&M-Commerce and was moving, told him to go for it.

"You only have one chance to do this," Scribner told him.

So Mehmen fixed up the van and made the long, slow drive to Colorado, with Sonic the van chugging along at 12 miles to the gallon. He arrived and settled into the routine that's carried him to this point:

On his lunch break, he'll head out for a quick 4-6 miles. After work, he'll do a 45-minute strength and mobility session at the gym. Then it's back to the van, where he cooks dinner and goes to sleep by 10.

"Basically just eat, run, sleep," Mehmen said. "That's just how I'm wired right now. It's demanding, but it's not exhausting. It's what I want to do. It's why I'm in the van."