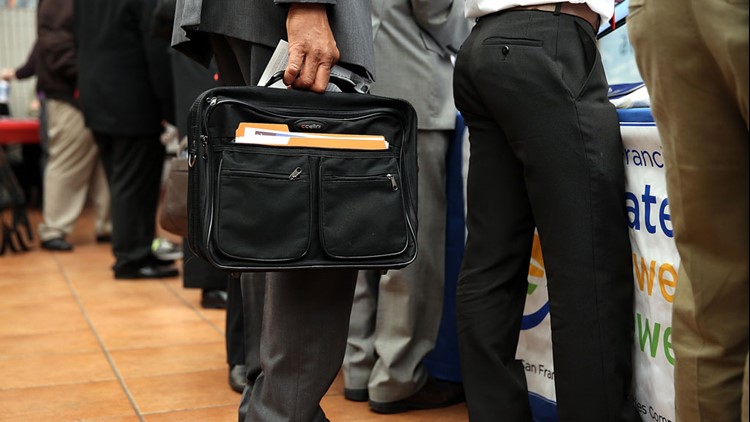 FILE: A job seeker holds a briefcase as he waits to meet with a recruiter during a job and career fair at City College of San Francisco southeast campus on May 30, 2013 in San Francisco, California.

Need a better job this year? Start by looking at these best DFW companies first

Booming job growth and the lowest unemployment rate in decades didn’t translate to an income boost for more than half of U.S. workers last year, a new study found, and wages didn’t grow as fast as economists expected.

Nearly 49 percent of Americans enjoyed higher pay this year as the result of a raise and/or new position, or up from 38 percent last year, according to Bankrate’s December financial security poll.

But hourly earnings grew by just 3 percent, according to the U.S. Bureau of Labor Statistics. Wage growth has not topped 4 percent since October 2008.

Does this sound like you? If so, you’re not alone: If you’re sick of your job, then it’s time to get your resume ready and start shopping what’s out there.

But you don’t want to move from one bad job to another: your problems might just follow you, or they could get worse. When can you believe what’s in the job ad or what the hiring manager says? While there are no guarantees, employees at the companies below have rated their experiences as best-in-class.

The Dallas Business Journal recognized and honored the Best Places to Work in North Texas last year. The Top 100 list features companies of all sizes — from just under a dozen employees to several thousand — and was compiled from nominations from several hundred Dallas-Fort Worth companies.

To get to the final 100 companies, the list was whittled down based on a variety of employee engagement responses to a survey, such as company culture, pay and benefits and more. An indexed score was created from employee responses to the survey, conducted by Quantum Workplace, which resulted in each company’s rank this year.

The companies with the longest current consecutive streaks on the Best Places to Work list are:

The 100 companies span multiple communities across North Texas and come from a variety of industries, with the most popular being professional services, banking and financial services, technology and commercial real estate.

Use the links below to explore the 100 Best Places to Work in North Texas and find your perfect fit: