Musk nonchalantly made the announcement Thursday at a Tesla stockholders meeting. 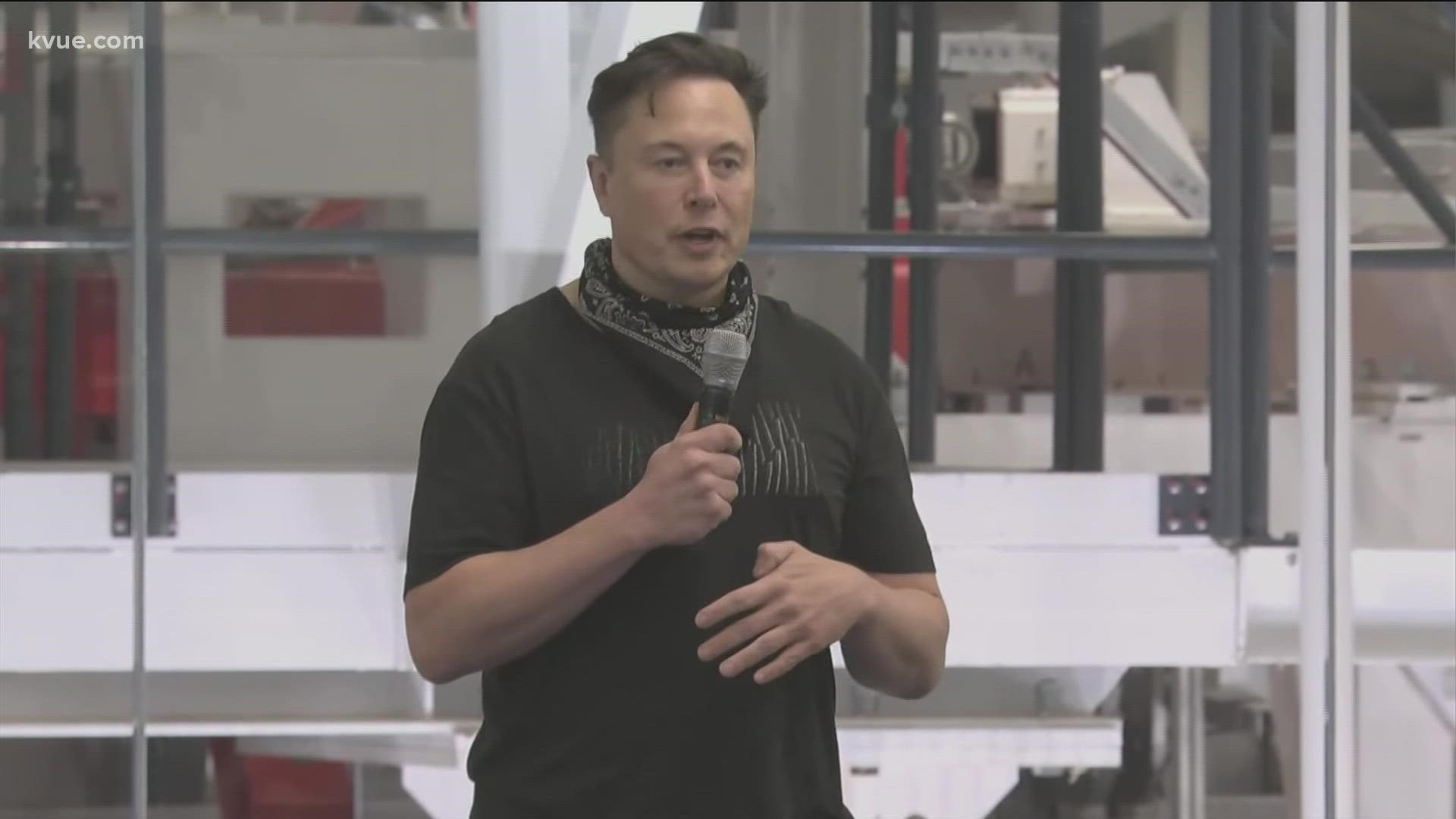 AUSTIN, Texas — Tesla's CEO Elon Musk made a pretty major announcement at its 2021 annual meeting of stockholders on Thursday – the company will be moving its headquarters to Austin.

Thursday's news comes just a few days after a report by Teslarati.com citing production and delivery reports on Tesla's Investor Relations page, claiming that the company was hinting at the potential move in Quarter 3 of 2021.

Tesla is currently continuing its work on its Gigafactory just east of Austin city limits. The $1.1 billion factory will produce the Model Y electric SUVs as well as the Cybertruck. Production is expected by the end of the year.

The factory is expected to employ 5,000 people with annual wages starting at $35,000. And, just last month, Tesla posted more than 300 open jobs for the Austin area.

"This is not a matter of Tesla leaving California as our intention is to actually increase output from Fremont and from Nevada by 50 percent," Musk said in the meeting. "It's tough for people to afford houses, and a lot of people have to come in from far away. And so it's we're taking it as far as as possible, but there's a limit to how big you can scale in the Bay Area."

Tesla's latest factory isn't the only project Musk has under his belt in the Austin area. The Boring Company is developing properties in both Pflugerville and Bastrop, and Neuralink also recently posted jobs in the area.

"We welcome Tesla home," Adler said. "It is, it belongs here. It is a tech company."

Adler said he is not sure where the headquarters will be located in Austin but added that Tesla "has more land than they need" for its Gigafactory.

He said he expects Musk to help Austin face some of its challenges ahead, including building housing around the factory in southeast Austin. In July, Tesla launched a project to build a sustainable solar community.

"Companies like Tesla come to Austin because the people that they want to have work for them want to live in a city like Austin," Adler said. "So, the values that we have in this community ... the progressive, environmental, the caring, welcoming values that is so much Austin is absolutely economic development. It's why I live here. It's why you live here. It's why people come to live here."

"Welcome to Austin! Tesla's move to Austin is a home run for our entire region. This decision cements our reputation as a global innovator and a local creator of opportunity. We are looking forward to the positive impact you will have on our region.

"All eyes are on Austin. This announcement shows the world that we are a global leader in innovation. Elon Musk has said that Austin is the greatest boomtown in America, and he has shown he believes that statement with his actions today. This is Austin’s seminal moment: we are now the hub of the tech industry, and we aren’t going anywhere.”

Manufacturing leaders in Austin also welcomed the announcement, hoping it would add to the already booming industry.

"The [electric vehicle] market is here to stay, it's going to grow," Robb Misso, co-founder of Austin Regional Manufacturing Association, said. "I think it's going to be a tremendous opportunity for growth. I think there'll be more and more companies looking at Austin, Texas, in order to support that market segment. So it's really opening Austin up to a whole nother vertical in manufacturing, I believe."

Abbott's full statement is below:

“Texas is the land of opportunity and innovation, and I am proud to welcome Tesla’s headquarters, one of the top innovators in the entire world, to our great state. Elon Musk and I have been discussing this relocation and the unmatched competitive advantages our state can offer. Here in Texas, we invest in our pro-business environment and work with entrepreneurs to develop and grow their businesses. Because of this, Texas continues to be a magnet for talent and innovation. I look forward to working alongside Musk and Tesla to expand their presence here in Texas, spurring economic growth and building an even brighter future for the Lone Star State.”