The Lending Tree study found that, on average, it is $636 less per month to rent a house than own one in Austin until the mortgage is paid off. 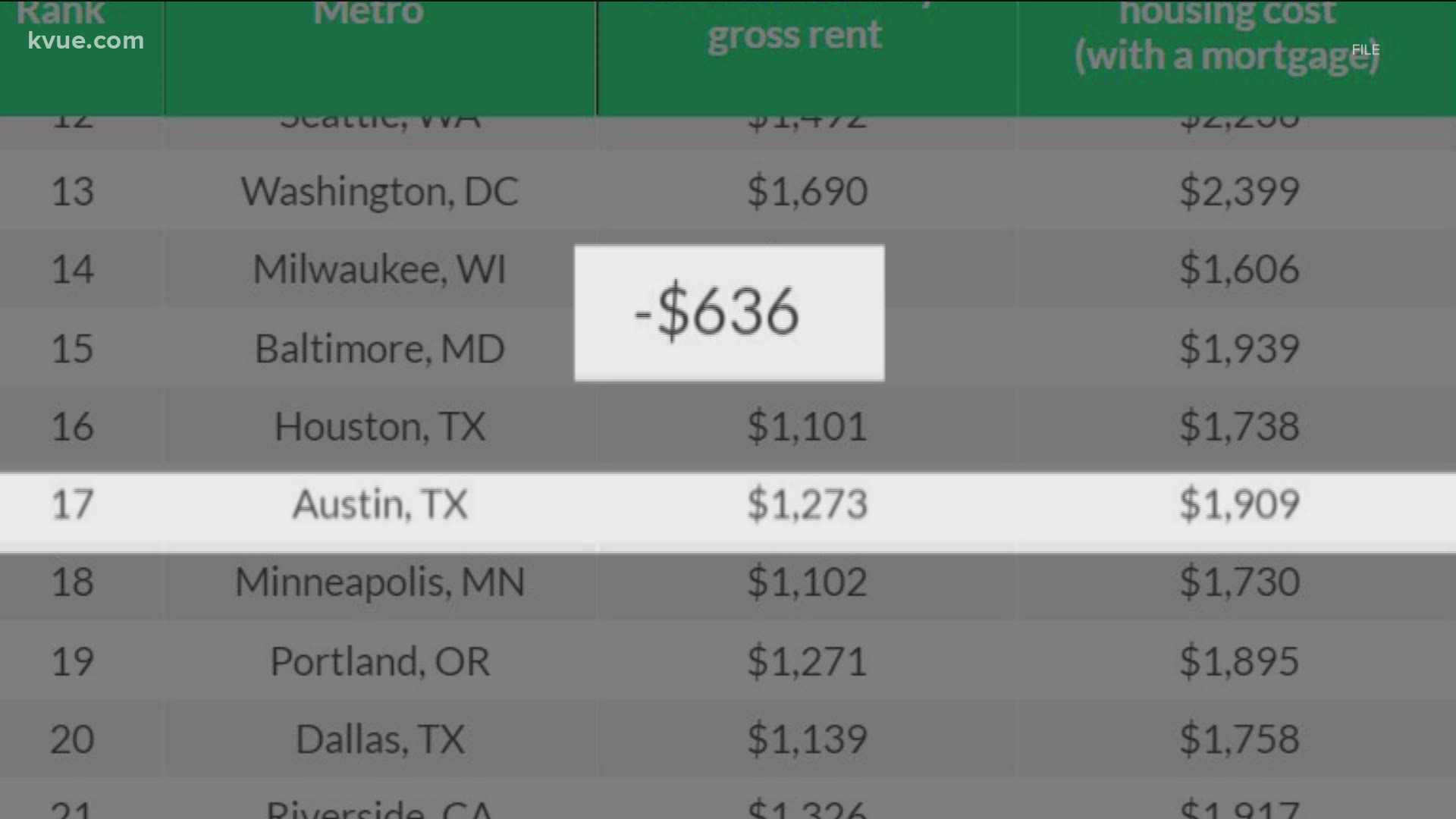 AUSTIN, Texas — Trying to decide whether to rent or buy a house in Austin? A new study says, on average, it is cheaper to rent a home than buy one, at least until the mortgage is paid off.

The LendingTree study found that, on average, it is $636 less per month to rent a house than own one in Austin. However, once the mortgage is paid off, monthly dues are $551 more for renters.

The study is based on median monthly gross rent and median monthly housing cost with and without mortgage in the 50 largest metropolitan areas in the U.S. Both variables include utilities, fees and taxes.

Across all 50 metros, the average difference in monthly median costs was $606.

Austin ranked No. 17 on LendingTree’s list of cities based on difference in monthly rent and housing cost without a mortgage, with No. 1 being the biggest and No. 50 being the smallest. Houston ranked No. 16, Dallas ranked No. 20 and San Antonio ranked No. 35.

The study says there is no right or wrong answer when it comes to deciding whether to rent or buy. Given what it found though, the author said there are points to consider when making a decision.

KVUE spoke with Nathan Fort, the president of Vital Retirement Planners, about the study's findings.

"I think ... the point of the article is to grab your attention," said Fort. "Because most people have heard the opposite, that it's more financially beneficial to own property versus renting."

Fort pointed out a few things he thinks the study is missing that people need to take into consideration.

"One is the idea that if you own the property, you're accumulating wealth," said Fort. "Over time, your property is going to appreciate in value. And over time, you're going to pay down your mortgage and you have this great asset to work with."

Fort said while renting comes with less responsibility, owning a home also gives the person more control because they won't have to worry about rent increasing or a lease not being renewed.

"There's the tax benefits of ownership, as well," said Fort. "Depending on your specific financial situation, you may be able to deduct from your income, your property taxes and mortgage interest. And if you're renting, you don't get to do that. So you may be paying the property taxes and the mortgage interest for the homeowner, but you don't get to take that deduction on your taxes."

When it comes to deciding what's best for you, Fort said to have a financial plan. He said people need to know their budgets and income and have an idea of what they want to do long-term. He also suggested getting advice from an expert.

Who are the donors behind the governor's border wall fundraising campaign?