Survey: D-FW parents ready to spend over $1,000 for back to school; 78% more than national average 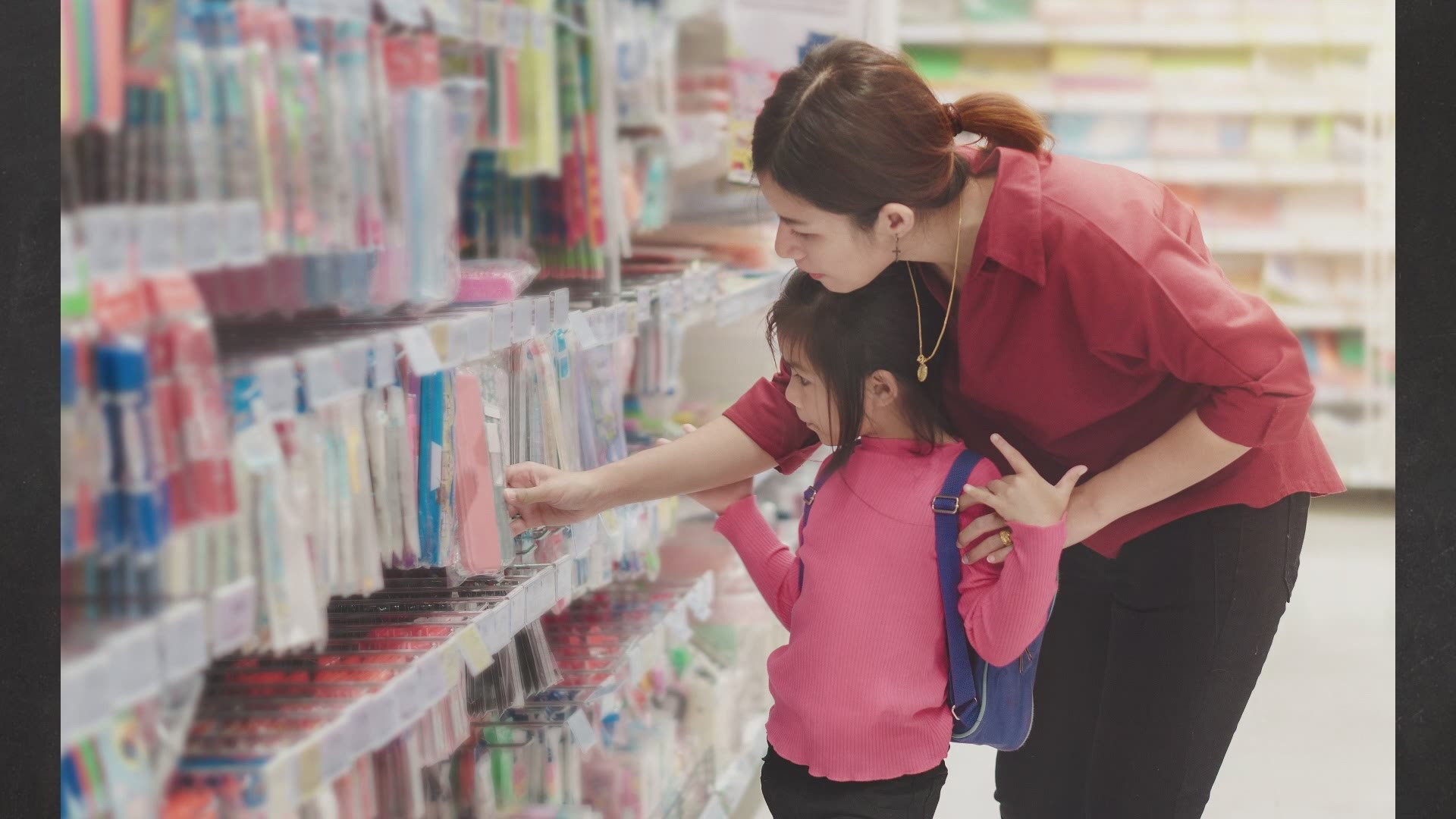 DALLAS — DFW parents are getting serious about back to school.

Parents here who were surveyed say they are planning to lay out $1,087 for school stuff. That's 78% more than the national average of $612. And it's almost twice what parents here paid for school-related items in pre-pandemic 2019.

All this information comes from Deloitte, which routinely checks in with parents on this topic.

Underscoring how much learning has changed since the pandemic began, Deloitte says a third of people in D-FW buying supplies for their children are allocating more for electronics, while half are cutting back on traditional supplies.

But some of the bloated BTS budget is because of price increases: 47% of people here who were surveyed say products are generally costing more than last year.

All the spending is also being driven by a bright outlook: 85% of the people in D-FW who were asked about the household financial situation said it's better now than a year ago.

Also, 61% of people surveyed in D-FW think the economy will improve in the next six months, much higher than the national average.

Deloitte expects K-12 back to school purchases alone could boost the local economy by $1.4 billion. If this all seems too early for you, here is some potential peer pressure: Two out of every five households here say they plan to be totally done with BTS shopping BTE (by the end) of July.

Here are the full findings from the Deloitte back to school survey:

North Texans expect to spend $1,087 on their kids – the highest level in years

Why more? Push to return to classrooms, rosy economic outlook and price hikes

DALLAS - Roaring back after a blur of pandemic disruptions, North Texans are ready to shop.

Deloitte’s latest survey found that Dallas-Fort Worth area parents plan to spend an average $1,087 on back-to-school items for their children – the highest level in years and nearly 80% more than the national tally.

The D-FW comeback on K-12 school purchases is expected to deliver an economic jolt of $1.4 billion into the local economy, according to Deloitte’s survey – one of the most extensive looks at shopping habits since the state in March allowed businesses to resume full operations.

The spike in spending is almost double what parents here shelled out in 2019, before the pandemic.

Now, in what is considered the nation’s second biggest shopping season, D-FW parents are being motivated by several key factors. That includes being optimistic about the economy and needing to stock up on more tech gear for their children, many still in virtual classrooms.

For retailers, the findings provide an important guide path over the next few months – that consumers are most interested in convenience, competitive pricing and fast and free deliveries. Retailers that demonstrate their resiliency during this time will appeal to shoppers and be better positioned to capitalize on growing consumer sentiment.

Among the survey highlights:

North Texans say they expect a more traditional return to the back-to-school season, and they are primed to spend more and early to ensure their children get what they need.

Besides locals saying they’re needing to stock up on more items, North Texans have a more favorable view of their finances and the economy than those nationally.

Digital learning as part of the new realities of schooling is propelling spending on tech-based learning tools and electronics.

The “2021 Deloitte Back-to School Survey,” conducted online using an independent research panel May 27-June 5, surveyed 400 Dallas and Fort Worth-area parents of school-aged children, with respondents having at least one child attending in grades K to 12 this fall. The survey has a margin of error of plus or minus 4.9 percentage points.

Deloitte provides industry-leading audit, consulting, tax and advisory services to many of the world’s most admired brands, including nearly 90% of the Fortune 500® and more than 7,000 private companies. Our people come together for the greater good and work across the industry sectors that drive and shape today’s marketplace — delivering measurable and lasting results that help reinforce public trust in our capital markets, inspire clients to see challenges as opportunities to transform and thrive, and help lead the way toward a stronger economy and a healthier society. Deloitte is proud to be part of the largest global professional services network serving our clients in the markets that are most important to them. Building on more than 175 years of service, our network of member firms spans more than 150 countries and territories. Learn how Deloitte’s more than 330,000 people worldwide connect for impact at www.deloitte.com