State Farm has gone virtual with many hail damage inspections for automobiles. They just need your phone and a little bit of your pocket change to make it work. 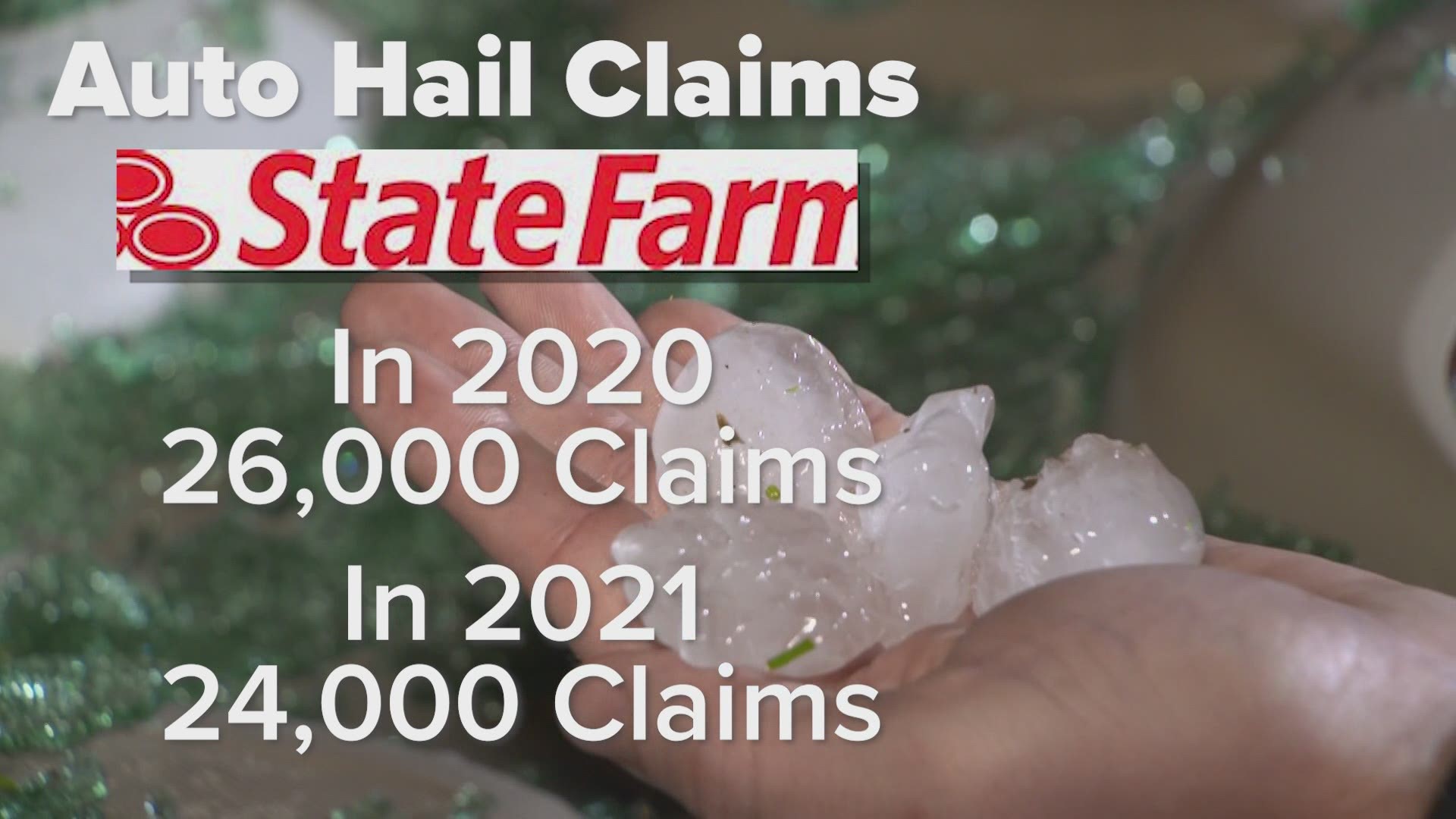 DALLAS — Hail…no…it isn’t just your imagination. We’ve had a lot of damaging hailstorms lately. Texas was number one for hail damage claims in 2020, and it looks like the Lone Star State is on track to maintain its standing. State Farm, the state’s largest home and auto insurer, says last year in Texas, they had a total of 56,000 hail claims totaling $474 million in damage.

Of those claims last year, 26,000 were auto hail claims. This year, State Farm says it has already processed 24,000 auto hail claims. Matthew Byrd’s truck was one of many casualties. It was battered by large hail that hit Keller in late April.

“I would say on average they were golf ball-sized and a couple of them were tennis ball-sized," he said.

RELATED: At least 5 tornadoes confirmed in North Texas, including EF2s near Blum and Waxahachie, officials say

That did a lot of damage. He said just his truck bed alone was covered by "a couple dozen" large pockmarks."

After confirming his mileage and vehicle ID number (VIN), State Farm was able to assess Byrd’s truck virtually through FaceTime. Auto Claim Specialist Dwight Dunn got Byrd on the video call with us to demonstrate how the process works.

Dunn asked Byrd to walk around the vehicle focusing on one area at a time, even giving instructions on how to best display the damage through the phone’s camera.

"The best way to see the damage is to move the camera slowly as you go across the panel and you catch the reflection," Dunn said.

RELATED: It may be the biggest purchase they ever make, but many Texas homebuyers hardly have time to think as homes sell at blistering pace

How pocket change helps the process

As he made his way around the vehicle, Byrd was asked to count and show the different dents. Later, he noted that Dunn "picked up multiple dents I didn’t see on the initial review."

One of the more interesting features of this way of inspecting the damage is that Byrd was asked to have some pocket change handy for the session. Right away, Dunn asked Byrd, “Can you put a quarter next to some of those larger dents you’ve got?”

Just like with an in-person inspection, those quarters, nickels, and dimes are great for giving perspective on the size of the dings.

There were occasional technology hiccups, where the audio or video on the FaceTime call was less than ideal, but in a little more than half an hour, Dunn was done assessing the damage. Byrd didn’t have to wait hours for an insurance rep to show up and didn’t have to drop off his truck at a body shop for a day or more to get an initial assessment.

RELATED: Here's why new Texans may be more financially prepared for severe weather season than Texans who've been here a while

If more dents are found later at the body shop, the estimate can be increased. State Farm says these virtual inspections allow them to process five times as many auto hail claims in a day than they can in person. And if the customer is signed up for an electronic funds transfer ahead of time, they can get the money soon after the call is over.

State Farm started this to maintain distance during the pandemic. But much like hailstorms, Dunn says this new way of doing business is here to stay.

“The virtual inspection will be around even after COVID."