A supplemental unemployment benefit is about to run out. You can also track your tax refund and get interest if it's late. 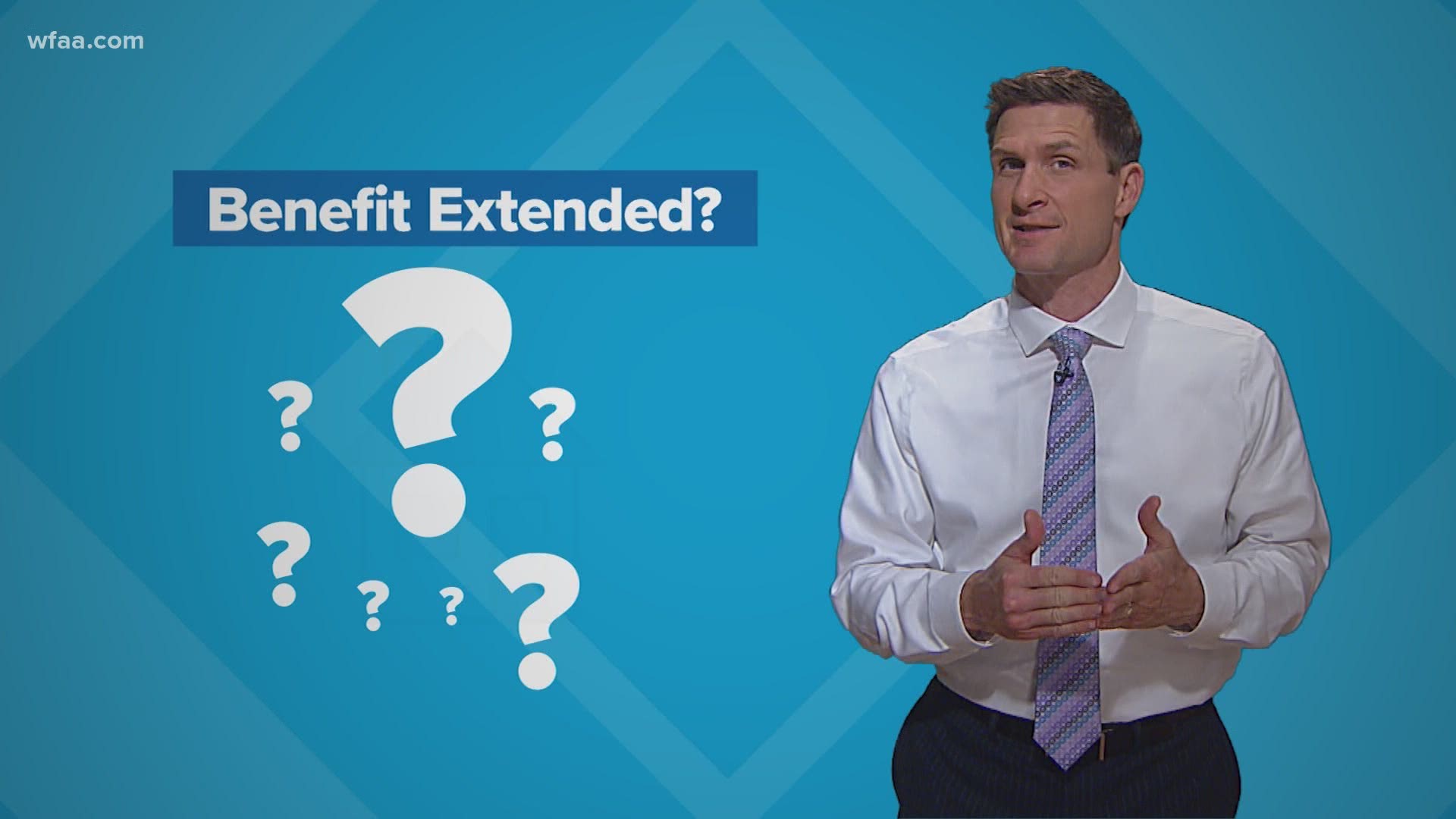 Looking back over the course of the pandemic, since the week ending March 14, nearly three million claims for unemployment have been filed in Texas.

Also, since that second week of March, the state says it has distributed $19 billion in unemployment payments.

Next week marks an important and tough transition for many people who have been receiving benefits. Federal Pandemic Unemployment Compensation (FPUC), which is the extra $600 weekly federal unemployment benefit provided for by the CARES Act, expires at the end of July.

But in Texas, that $600 per week goes away a little earlier. That’s because the Texas Workforce Commission’s benefits week runs Monday through Saturday. July 31 falls on a Friday, and TWC Spokesman Cisco Gamez said, “Legally we are not allowed to pay partial benefit weeks."

The last full Monday through Saturday week in July ends on July 25, so that is when FPUC ends in Texas.

Will federal benefits be extended?

There is talk in Washington about possibly extending the federal payments, but there is no resolution yet.

As USA Today reports: “Democrats have made extending unemployment one of their priorities, but Republicans have been skeptical, noting that some Americans are making more on unemployment than they were at their jobs and that businesses trying to reopen are having trouble rehiring.”

Gamez assures if lawmakers reach a last-minute deal to extend federal payments, TWC will be, “All hands on deck. We will work quickly and diligently to address any changes or adjustments.”

Barring any extension, though, Gamez urges benefits recipients not to contact TWC when the $600 per week federal benefit expires.

Gamez said that TWC has no control over the end of the federal program. If federal benefits are not extended, those receiving unemployment in Texas would continue getting state benefits.

Benefits for people getting PUA

That includes workers who are self-employed, contractors, part-time and gig employees who are newly eligible for benefits under the Pandemic Unemployment Assistance (PUA) portion of the CARES Act. PUA does not expire July 31.

Those recipients would continue getting state benefits, which Gamez said range from a minimum of $207 per week to a maximum of $521 per week. Those workers are eligible to receive that PUA benefit for 39 weeks. If they exhaust that, they are eligible for an additional bucket of benefits: seven weeks of High Unemployment Period payments if the state is still in a period of high unemployment.

In total, PUA benefit recipients are eligible (currently) for 46 weeks of unemployment.

Benefits for people getting regular unemployment

For traditional workers who are collecting unemployment, after the week ending July 25, their benefits will revert to just the state payment, which ranges for those employees between $69 and $521 per week. On average, benefit recipients in this category are getting $349 per week in state benefits.

In total, people receiving regular unemployment are (currently) eligible for a total of 59 weeks of benefits.

In either scenario, TWC says people getting benefits do not need to contact the agency every time one of the buckets of benefits is set to run out.

Gamez says it is now pretty seamless and automatic to transition from one bucket of benefits to another.

If there is a gap in payments, you may have to contact TWC, but the agency stresses that you should keep going in every two weeks to request payments in the meantime.

How TWC is handling unemployment 'overpayments'

It was recently announced that this year, TWC overpaid about $32 million in regular unemployment benefits. TWC has already sent correspondence to roughly 46,000 Texans who received those suspected overpayments.

In cases where an employer or recipient were in error, the benefits will have to be repaid to TWC. The good news for those affected is that as long as the overpayment wasn’t due to fraud, there will be no penalty or interest charged, and they can set up a payment plan.

Prior to COVID-19, TWC would deduct any overpayment amount from a recipient’s remaining benefit amount. They are not doing that during the pandemic, so even people who were overpaid for prior weeks can still keep getting benefits for weeks in which they are eligible.

Taxes were due this week, after the deadline was extended from May 15 to July 15 due to the pandemic.

If you filed a paper return, a reminder-- the IRS is way behind because of COVID-19. Workers have been out of the office and are now reportedly returning to mountains of envelopes.

Even electronic refunds have been slow to process in many cases, though. If you are due a refund, there is a site, updated nightly, where you can check the status of your refund. Just click here, then click "Check my Refund Status."

And this is very unusual, the IRS has announced it will pay you interest if your refund is delayed, and that interest paying period started April 15, even if you didn’t file until July 15.

Shopping around for homeowner's insurance

Shopping around for a better homeowner's insurance premium every year is a good idea. It is a ton of work, but it can save you money.

Insurify, a site that helps you compare insurance rates, says its data shows that Texas homeowners are paying the third highest home insurance rates in the country. They say the average homeowner’s insurance premium in Texas is $1,893. Blame the hail, the hurricanes and the twisters.

Previously, WFAA published a story on how many homeowners are under-insured. As part of that article, we shared some links to good information when you are shopping around for coverage.

United Policyholders has a lot of entries on this topic. They advise you to check your insurance coverage, they offer tips for insuring your home, and implore you to make sure you are covered for a total loss.