Why would a business give back what could essentially be free money? These PPP loans can be more complex than business owners were expecting. 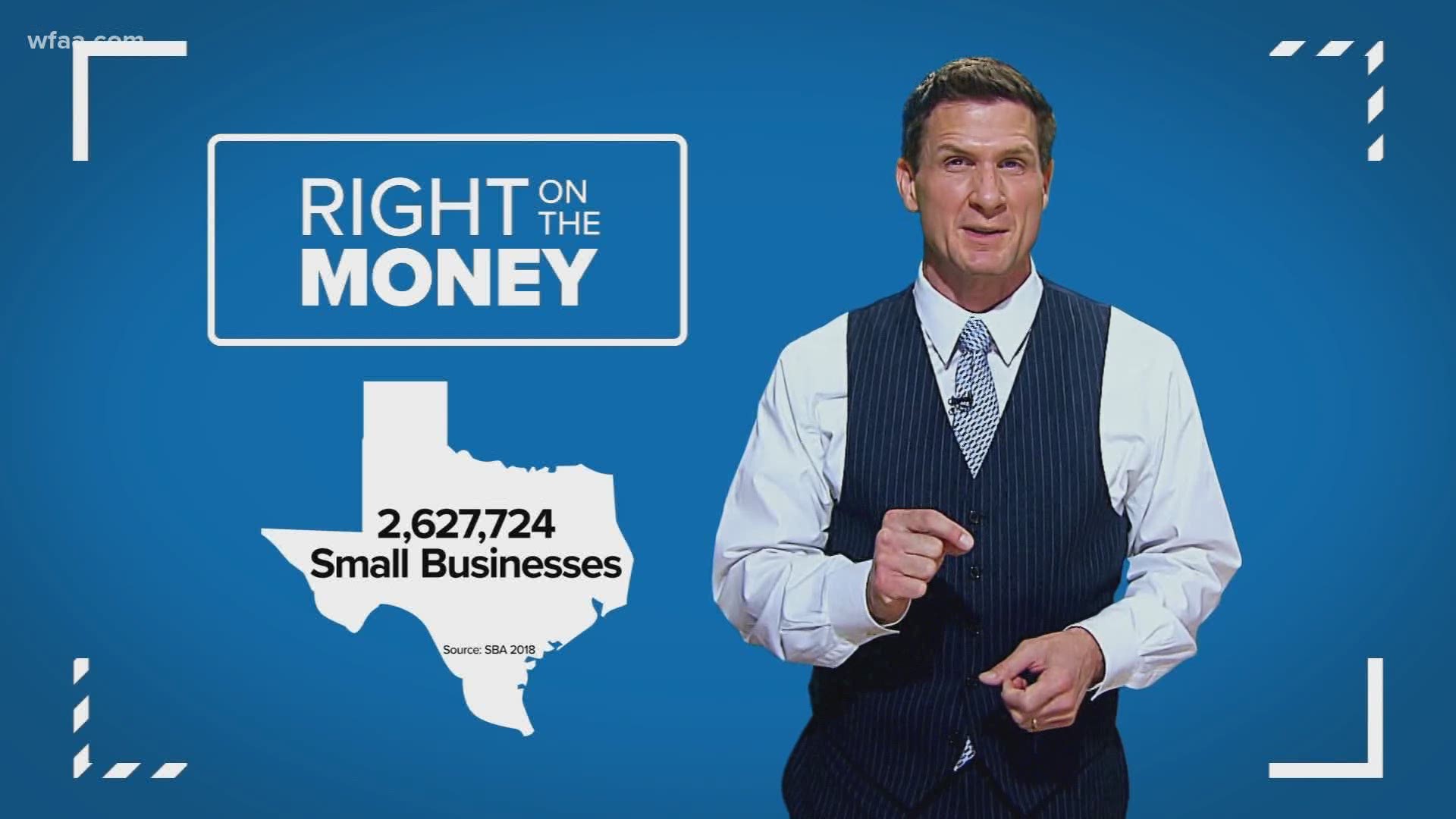 DALLAS — Texas is home to more than 2.6 million small businesses, according to 2018 data from the Small Business Administration. More than 100,000 Texas businesses have recently taken advantage of the Paycheck Protection Program, or PPP.

There have been two rounds of funding for the program, totaling more than $650 billion. About $122 billion remains in the fund, which provides loans that can be forgiven if the money is primarily spent to keep workers on the payroll.

Note to workers:
If your employer gets money through the program, here is how that affects your unemployment benefits through the Texas Workforce Commission: If you return to work full time you no longer qualify for unemployment. If you go back to work with reduced hours you could still qualify for benefits.

RELATED: This calculator helps estimate how much of a potential PPP loan could be forgiven, and how much you may still owe

If you’ve already gotten one of these loans and have had second thoughts, you can return the money -- no questions asked -- by Thursday, May 14. That information is included in the frequently asked question link above, items No. 43 and 45.

Why would a business give back what could essentially be free money?

These PPP loans can be more complex than business owners were expecting.

Ford Baker, CEO of Dallas-based accounting firm BaCo Group, says many business owners apply for the loans by estimating their needs over a two-month timeframe. But the loan forgiveness is actually calculated based on eight weeks of expenses.

“Technically there are 56 days in 8 weeks and there’s 61 days in two months. You’re going to have five days that miss a rent payment in there. You may miss an entire payroll," he said.

This could leave businesses scrambling to cover payroll even if they receive funding, Baker says. The key is for businesses to plan ahead and work closely with their accountants to gather the right information and update schedules.

"So, is my weekly average going to be enough to cover what I had planned on in a monthly average format, or am I going to have to accelerate payroll or do something to try to make sure my eight-week average reflects what happened?" said Baker.

Advice for businesses who have already gotten PPP loans

Baker says his firm has helped many small businesses through the PPP process. He has some advice for those business owners who have already received the funding:

He also knocks another piece of common advice that business owners should set up a separate bank account to manage the PPP funds:

Baker says it is really important to communicate with your accountant throughout the process, and carefully document everything.

Advice for businesses applying for or considering a PPP loan

For those firms still going through the process of applying for PPP loans, or those planning to apply in the event of future PPP funding, Baker advises:

Baker says the current situation has tested a new program he created under the name BaCo Tech.

“This is a brand-new technology we are really excited about because it worked with this crisis. It creates a standard workflow that is not just a bow on it when the CPA needs it," he said. "It brings it in real-time every night. It identifies things we can do during the year to get ready for the end of the year.”

BaCo Tech is currently onboarding other CPAs interested in using the platform.

Will Baker, who was ran a small business prior to joining the firm as Marketing and CPA Experience Director, explains the benefits of it.

He says the platform helps close the communication gaps between business owners and CPAs. Will Baker says when he was running a small business, he didn't know the difference between a balance sheet and a trial balance.

"That’s was not something that was in my vernacular of what I did as a business guy. I didn’t know what I didn’t know. It ended up with frustrated communication gaps," he said.

BaCo Tech helps by gathering the information from the business owner and passing it along to the CPA.

"And it eliminates the frustrations business owners feel. Business owners get really frustrated by surprises---like I owe how much? And I am finding out on April 14. That’s frustrating,” said Will Baker.

Kaitlyn Kirkhart, the CCO at BaCo Tech, adds that this technology eliminates the last minute rush as a deadline approaches. She said they used to get emails, mail, phone calls and even text messages of documents and spreadsheets as a deadline neared.

"That’s where BaCo Tech comes in. It eliminates that for business returns by delivering everything in one place automatically in a consistent format to integrate directly into a CPA’s workflow," she said.

How the Paycheck Protection Program has worked so far

The PPP has been a lifeline for a lot of small businesses during an unprecedented economic challenge. But the program has also been heavily criticized for various reasons. Ford Baker, however, said he doesn’t have anything negative to say about the program.

“I would just congratulate people for thinking outside of the box and getting something funded really quickly," he said. "To start trying to say I want to second guess what happened or would there be a better way of doing it…it’s all counterproductive. This is what we’re in for. Let’s see it through.”

Ford Baker says he's seen firsthand how helpful the program has been for many businesses. He got emotional talking about how crucial small businesses are to the economy and to people who count on those businesses for jobs.

He said for businesses in the travel or event industries, the coronavirus pandemic has been incredibly damaging.

“There is likely not an event with more than 10 people that is going to occur within the year. And if your entire revenue stream is built on gathering hundreds or thousands of people and managing that event, you have lost revenues for an entire year," said Ford Baker. "Your whole life may have been built around, 'this is what I want to do.' It’s tough."

Ford Baker says BaCo Tech is what he wants to do and he thinks about the impact on himself and others as he runs his business.

"Every time I have ever hired somebody, the first thing on my mind is, 'can I afford another mortgage?'" said Ford Baker. "There is a family out there that is depending on me to make the payroll for the next couple of years and there is going to be a mortgage company that issues a loan off my W-2, so there is a big responsibility that we have as a business owner. The people who are working for us…we are taking care of all of them”