Democrats have passed a plan in the House. Republicans are proposing a plan in the Senate. Americans struggling financially are waiting to see how much help emerges. 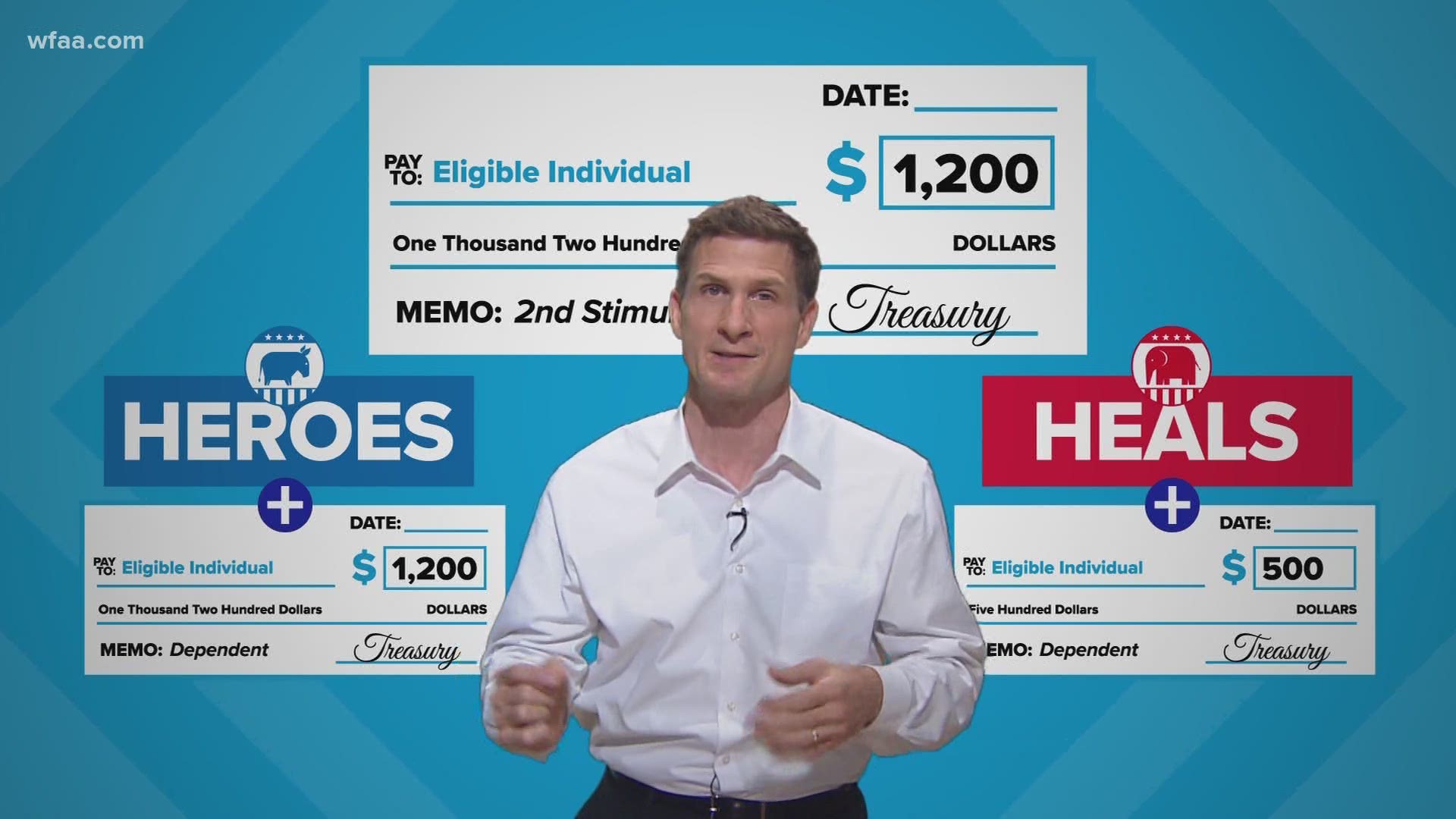 It’s the HEROES versus the HEALS. Those are the respective names of the acts in the U.S. House and the U.S. Senate that detail the latest plans to respond to the ongoing economic impact of COVID-19.

The HEROES Act, passed by the House in May, is the blueprint put forward by Democrats. The HEALS Act, which has not yet passed the Senate, has been formulated by congressional Republicans and the Trump administration.

The GOP plan is said to cost about a trillion dollars. The Democratic plan is estimated to cost three times that amount. There are a lot of different priorities and points of contention between the two bills, including more rescue funding for businesses, money for state and local governments, and COVID-19 testing funds.

Another 'stimulus' payment would include many left out in first round

Both plans would include another emergency relief ‘stimulus’ payment of $1,200.

An important note: Both sides agree dependents over the age of 16 should be eligible for payments this time. Inexplicably, that group was left out of the first emergency relief payment.

Democrats also want to extend a ban on evictions and foreclosures for another year. So far, no such extensions have been evident in the Republican plan.

The big battle: What happens to the now-expired extra $600 unemployment benefit?

One of the biggest points of contention will be how much money out-of-work Americans will receive in federal unemployment benefits. For months, the U.S. government has been giving supplemental unemployment payments of $600 per week to anyone who qualify for state benefits.

With many millions still out of work or underemployed because of the pandemic, Democrats want to continue the $600 weekly federal unemployment payments through January 2021.

Republicans want to reduce that $600 payment to $200 per week through September. Starting in October, the payment would be made under a percentage-based system; replacing 70% of a worker’s lost wages by combining the state benefit and the federal benefit. But the federal benefit would be capped at $500 per week, so anyone in Texas making more than about $76,000 per year would receive less than 70% of their lost wages under that plan.

Without new deal on federal benefits, unemployment checks will become much smaller

The federal $600 benefit expired in Texas July 25.  That means more than 1.8 million Texans who are still currently receiving jobless benefits will see big cuts to their unemployment checks. For any weeks beyond the week ending July 25, when they request payments, they will only be eligible for state benefits, which max out at $521 per week.

Since the beginning of the COVID-19 crisis in March, TWC has received applications from 3.1 million Texans. Some were denied benefits for a variety of reasons. The agency says it has issued payments to 2.37 million Texans.

There are still 224,151 applicants who are waiting for their claims to be processed. TWC says it is getting to those filers as fast as it can, and that if those applicants are approved, they will receive back pay (including the federal $600 per week for any weeks included in their claims when that benefit was still in effect).

There is another reprieve for unemployment recipients in Texas. At their meeting July 28, leaders at the Texas Workforce Commission decided to continue suspending work search requirements, which have been waived throughout the pandemic.

Those receiving unemployment don’t have to look for a job in order to keep getting benefits. TWC says it will follow the lead of Governor Abbott and will review the possibility of reinstating the work search requirement when the Texas economy reopens to a greater degree sometime in the future.

More on Right on the Money: