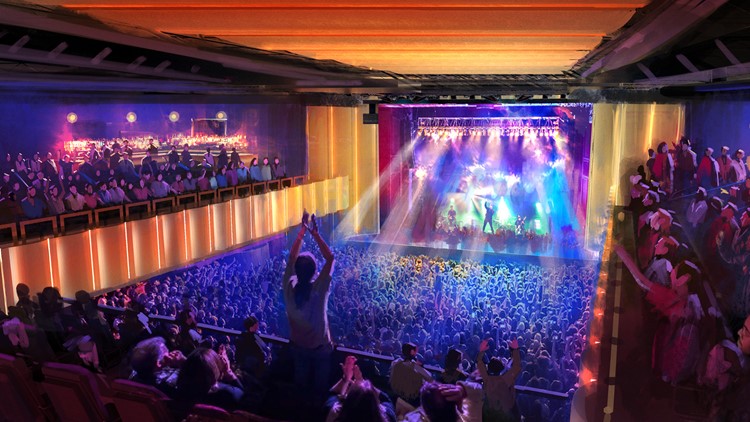 Photo by: Courtesy of Live Nation
Rendering of music venue

An old warehouse owned by Mark Cuban in the Dallas Design District is being converted into a 1,000-capacity live-music venue for rising artists and is set to open in May.

The HiFi Dallas is under construction next to the Dallas Mavericks’ practice facility along North Stemmons Freeway and a short walk from the American Airlines Centers, where the Mavericks play.

The venue’s capacity will be 1,000 people if it’s set up for general admission and 700 people with all seated, said Ben Weeden, chief operating officer of Live Nation Entertainment Inc.’s Clubs and Theaters Division. The Los Angeles-based concert producer and promoter is collaborating with Cuban, owner of the Mavericks and a serial entrepreneur, on the project.

Others involved include general contractor Swinerton and architectural firm Rios Clementi Hale Studios, both of which are based in California with Texas offices in Dallas and Austin, respectively.

In the interview that follows, Weeden explains how The HiFi Dallas fits into the North Texas music scene, how the deal between Cuban and Live Nation came together, and how future collaborations between Live Nation and Cuban and the Mavs could work.

Where did the idea for this venue come from?

Originally, it was a discussion between our CEO (Michael Rapino) and Mr. Cuban. We’re just very lucky that there was this old warehouse that was available, and we were able to work with Mr. Cuban on contributing the land and work with him on the buildout of the venue. It’s been a really synergistic relationship with his team, and we’ll carry that forward and work on programming with his team, with the Mavericks. It’s a pretty unique situation, and it’s exciting.

Other than being a landlord, what will Mark Cuban’s involvement be in this project moving forward?

We’re working with his team and the Mavericks to add value to his fans as well as our fans. We hope that there are pregame and postgame events. We’d love to work with the Mavericks players on different types of programming, looking at speakers series, the players may be interviewing some of the bands that we have coming through. There is a lot of opportunities, which is why this is fun, exciting and unique.