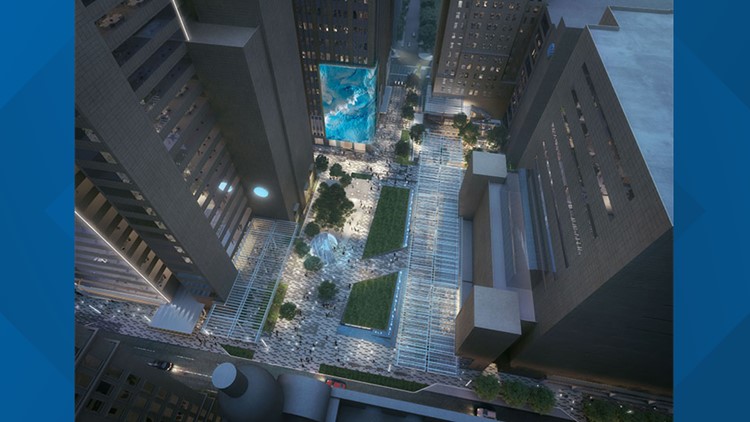 The media and telecommunications giant (NYSE: T) is set for a grand opening in May, said Michelle Brockwell, the assistant vice president overseeing the Discovery District, in an emailed statement. It comes after the $100 million development was unveiled more than three years ago.

“We’re thrilled to see the AT&T Discovery District begin to come to life,” Brockwell said in the statement. “It will be a destination unlike any other in Dallas.”

The effort is a large project with open spaces next to massive buildings that house company employees. The campus will feature art, places for refreshment and some cutting-edge video options.

AT&T, while keeping an eye one costs, is investing in a new headquarters as it reaches out to the community and looks to attract and retain talent. The site sits in a historic part of downtown Dallas around the intersection of Jackson and Akard Streets.

Already, Cowboys Fit Downtown has opened its gym and is now taking memberships, according to Brockwell. The Globe, a 30-foot interactive sculpture, has arrived and is taking shape.

And the giant screen? Pedestrians can see that AT&T is “testing a variety of content” on its 104-foot tall media wall, Brockwell said.

Leading up to the opening, the company will open a first-of-its-kind “AT&T Experience Store,” that will offer new ways for watching and accessing content. It will also add new restaurant options.

“We can’t wait for everyone to experience all that the District has to offer when it fully opens in May,” Brockwell said.