One by one, retired Dallas police and firefighters came to the pension fund to get their money. 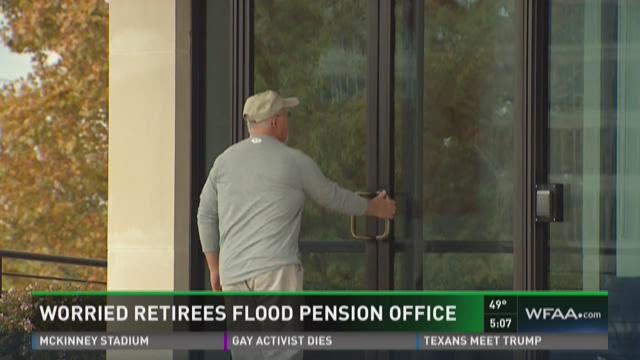 DALLAS -- One by one, retired Dallas police and firefighters came to the pension fund to get their money.

“I think instead of filing a lawsuit … it would have been a lot cheaper (for the mayor) just to get a billboard that said make a run on the bank,” retired firefighter George Snowden told News 8 outside the pension office. “So here I am making my run on the bank.”

Snowden’s trip to the pension office came one day after Mayor Mike Rawlings filed a lawsuit seeking to stop lump sum withdrawals from the Dallas Police and Fire Pension Fund. Retirees are seeking to take their money out of high-interest supplemental savings accounts known as DROP.

The deadline to make withdrawals was 5 p.m. Tuesday.

Snowden and retired public safety workers say the mayor’s lawsuit was the catalyst for them to come to the pension office Tuesday. Snowden is married to a retired Dallas police officer. He says for now she's leaving her DROP money in the fund.

“Everybody's wanting to roll their money over and keep it safe,” said Jerry Fuller, a retired police officer.

But by taking money out of the failing fund, it’s actually damaging the pension. The pension is fast running out of cash. Soon, the fund will have to sell assets to cover the lump sum withdrawals – a worst-case scenario that would drive the fund even quicker to insolvency.

But many of the retirees say they have too many fears that their money won’t be there so they feel they have to act to protect themselves and their family.

“I’ve never wanted to damage the fund by taking my money out but leaving my money in in could damage me so I have to be selfish at this point," said Paul Blakely, a retired firefighter. “I don’t like that but it’s made me be that way.”

Blakely retired in October after 33 years on the job. A big reason he retired was because the pension board had decided that active duty police and firefighters couldn't move their DROP money out of the fund. He wanted to be able to access it if he needed it.

“I’ve worked for 33 years on the fire department and that’s all going down the tubes now,” Blakely said. “All he’s done is incite fear and panic.”

He and others acknowledged that the DROP program, which paid in excess of eight percent into DROP accounts for years even when the pension was doing poorly, wasn't well constructed.

DROP allowed police officers to effectively retire in the eyes of the pension and continue to work while their monthly pension checks went into savings accounts.

“There maybe should have been some limits on how long you could stay in DROP, or they should never have the amount of interest they originally guaranteed,” he said. “Both of those things were probably unsustainable.”

All the retirees say they're worried that the board will stop people from taking their money or that the judge will issue an injunction. The board meets Thursday morning. The judge has said she'll hold a hearing to consider issuing an injunction Friday if the pension doesn't act.

The requested withdrawals will flow out of the pension on Friday if neither act.

It’s “the way you would feel if you went down to the bank … and they said, ‘Well, you can’t have your money,’” Snowden said.