John Lewis remembered for his life-long fight for civil rights

Weather was no deterrent for those who showed up to pay their respects to the late congressman and civil rights leader. 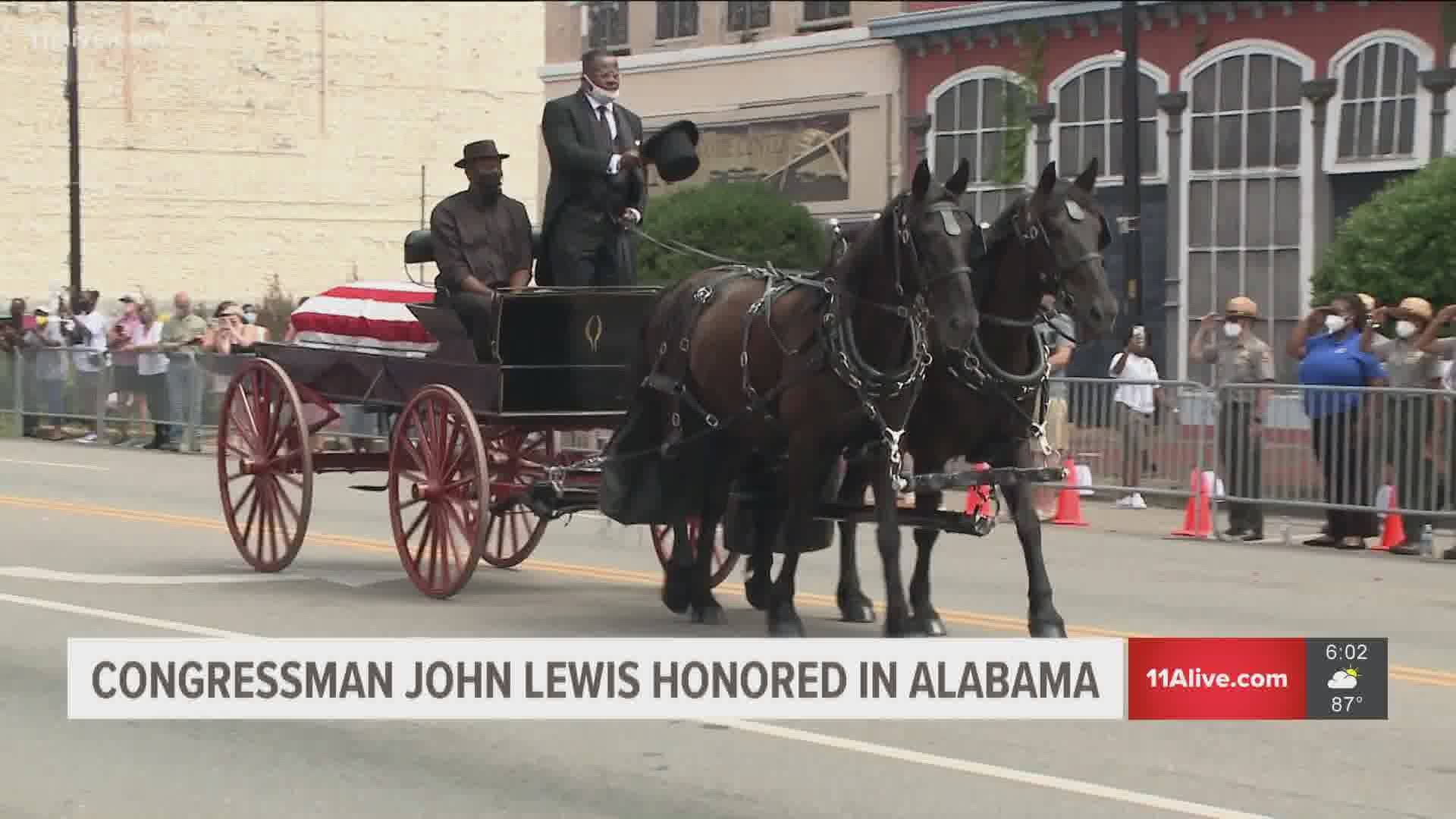 ATLANTA — Lines amassed outside the Alabama State Capitol on Sunday, ignoring heavy rains and wind for their chance to pay tribute to a civil rights icon - Rep. John Lewis.

Gov. Kay Ivey presided over a solemn ceremony at the capitol building before the exterior doors to the building were closed.

They were later reopened for members of the public to file past the casket and pay their respects for the Alabama native before his final journey continues.

John Lewis crossed the Edmund Pettus Bridge in Selma, Alabama for a final time, fittingly, on a Sunday.

Lewis made his final crossing of that bridge by way a horse-drawn carriage pulling a caisson.

Fifty-five years ago, on Sunday, March 7, 1965, Lewis, along with Rev. Hosea Williams, led between 500 and 600 marchers southeast out of downtown Selma on US 80 across the Edmund Pettus Bridge, bound for Montgomery, some 50 miles away.

But history had other plans. On the opposite side of the steel arch bridge named for the former Confederate general and Alabama leader of the Ku Klux Klan, waited a wall of Alabama State Troopers and a posse of other men.

The county sheriff, confronting the civil rights marchers, demanded they go home -- or back to the church where they had organized prior to the march.

When Williams requested a moment to pray, the sheriff ordered his men forward.

The police and deputies set upon the marchers, knocking them down, striking them with violently with batons.

The events of that day, which were seen on television across the nation, became known as "Bloody Sunday."

On this Sunday, following Lewis' final crossing of the bridge, the procession proceeded from Selma to Montgomery, where the congressman lay in state at the Alabama State Capitol.

1 / 18
AP
The casket of Rep. John Lewis moves over the Edmund Pettus Bridge by horse drawn carriage during a memorial service for Lewis, Sunday, July 26, 2020, in Selma, Ala. Lewis, who carried the struggle against racial discrimination from Southern battlegrounds of the 1960s to the halls of Congress, died Friday, July 17, 2020. (AP Photo/Brynn Anderson)

She was with John Lewis on the Edmund Pettus Bridge. She shares what she learned from him

Brenda Wood's Last Word on Congressman John Lewis: 'We didn’t deserve him. But Lord, did we need him!'