Tabetha Noel-Ratcliff and Clark Strong didn't know each other until a few weeks ago. She was born with a hand deformity. He made her a prosthetic with a 3D printer. 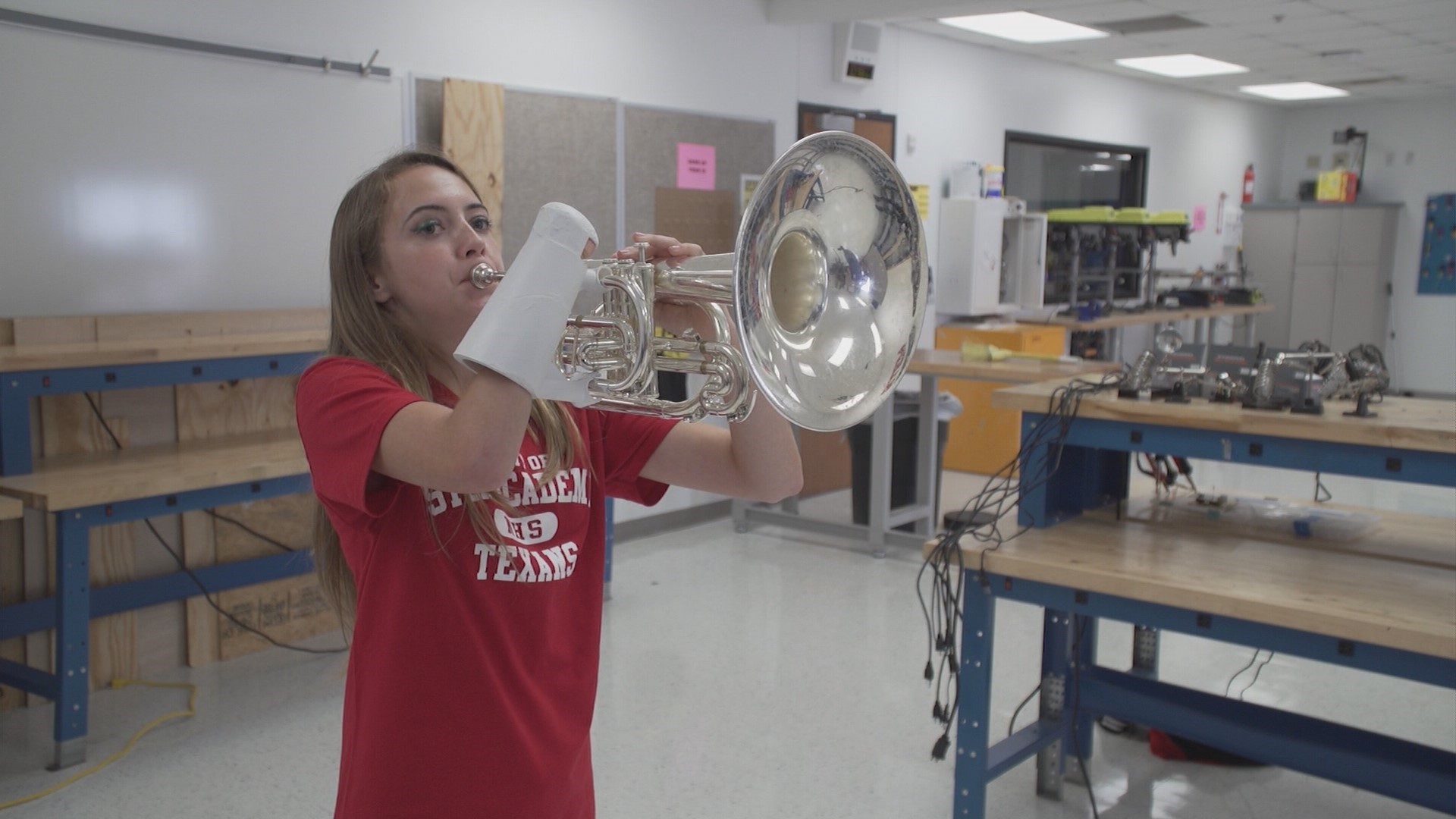 JUSTIN, Texas — A STEM student at Northwest High School created a prosthetic for another student so she could play her instrument in the marching band.

Tabetha Noel-Ratcliff, 15, was born with symbrachydactyly, or a hand malformation. The Northwest High School freshman has full control over her right arm, but her right hand and fingers aren’t completely developed.

She didn’t let this stop her from playing the French horn.

When the 15-year-old joined the marching band at Northwest High School, she noticed it was a struggle to play the mellophone while marching at the same time.

“It’s a little more bumps, up and down,” Noel-Ratcliff said. “Makes it harder to play, and also it’s just harder to balance.”

Realizing the freshman needed something to help her handle the weight of the instrument while marching, the Northwest High School band director reached out to the robotics teacher, who knew exactly who to turn to.

“It was an exciting challenge, and I was ready to get into it,” Clark Strong, 16, said.

Strong, like Noel-Ratcliff, is a STEM student. The two didn’t know each other, but Strong didn’t hesitate to help out.

Passionate about 3D printing, the junior designed a prosthetic that would help the freshman balance the mellophone and keep it steady while marching.

This project was not part of a school assignment.

“I did it on my own time in between homework and studying,” Strong said.

Strong used the 3D printer he has at his home and delivered the final product to Noel-Ratcliff a few weeks ago.

“To know that you’re able to help someone, it’s very rewarding,” Strong said. “And then to see that what you did, and how it’s able to help them actually in the field, it’s the greatest feeling.”

“If there weren’t people that did stuff out of the kindness of their heart, I wouldn’t have a prosthetic,” Noel-Ratcliff said. “I wouldn’t be doing as good in band.”

Strong credits his late grandfather as inspiration for his love of 3D printing.

“Used to be me and my grandfather, just learning how to do it,” Strong said. “Sad that he passed away a little over a year ago. And it has been very helpful to be able to sort of carry on his legacy in this 3D printing. And it’s kind of why I keep doing it. To be able to help others but to also honor him as well.”